After 9/11: I Wasn't Prepared to Prepare My Kids For This New Reality

Well hello! I’m so glad you’re here. A version of this article also appeared in the It’s Not Just You newsletter. Sign-up here to receive a new edition every Saturday. As always, you can send comments to me at: Susanna@Time.com, or via Instagram:@SusannaSchrobs.

This week, for the 20th anniversary of 9/11, I’m sharing a piece I wrote in the winter of 2001 about being the parent of small children in Brooklyn during the attacks. My kids are in college now. They don’t remember any of that time as our city reeled. Well, not in their conscious minds anyway. I think their bodies do remember. Perhaps we all share an unnamable ache that comes with those crisp, sunny days of early September when we invariably think of those who lost someone precious in 2001 and its aftermath.

On the morning of September 11th, I was standing outside my 4-year-old’s evacuated preschool in Brooklyn holding a baby wipe over her newborn sister’s face. We were on Atlantic Avenue facing New York harbor, and bitter smoke from lower Manhattan and the collapsing World Trade Center towers was sweeping up the street. I thought I could shield her tiny lungs from what was in the air.

It was the first day of preschool so we parents were sitting on the floor in a circle when the head of the school leaned in and said they were shutting down. “It’s the Pentagon too,” someone said. We scooped up the kids and left quickly. But once outside, there was nowhere to go. Local busses and trains stopped running, so I couldn’t get to my apartment, but I found a friend who lived nearby and she welcomed us in.

We sat with her watching the endless loop of towers falling on the TV screens and waited for my husband to call. He had gotten into the subway that morning to take a line that went right under the World Trade Center. We wouldn’t hear from him for five hours; all the cell lines were jammed.

He exited the train at the Wall Street station walking through the stopped cars to get out. People handed out wet rags to the passengers who climbed the steps to the surface of the city covered in white dust. It was four or so miles by foot over the bridge to our part of Brooklyn and he showed up at the door powdered with tragedy, but intact. He told us the roadways were packed with thousands of people like him, all looking like ghosts trying to get back to their families.

As the days passed, the loss all around us took shape. If a thermal weather map of the country could measure grief, surely there would be a deep purple stain seeping into the rest of the country from New York, Washington, and Shanksville, Pennsylvania.

At night we could look out our living room window and see the glow of the fires from what people were calling “the pile,” the crushed towers, and all those who lay within. It would burn for weeks. We couldn’t help dig through the rubble. All we could do could scratch at the surface of the sadness that soaked the city.

Sign-up here to receive a new essay every Saturday.

One night, thousands of us walked to our neighborhood firehouse with candles in our hands, babies in backpacks, and kids in strollers. People filled the street in front of Squad One. It was one of two local fire stations that lost many members in the attacks.

When the alarm sounded, Squad One headed over the Brooklyn Bridge to the World Trade Center. Twelve firefighters died as the towers collapsed. And in the wake of that horror, just a few young firefighters were sitting behind tables in their station house where there were no trucks, they were all in lower Manhattan. Outside, the crowd sang “Amazing Grace.”

We waited to file into one door so we could donate money for the families of those who’d died, and then file out the second door. We said thank you as we entered and put what we had in the bins, looking into the eyes of the young firefighters who said thank you back.

The procession stopped for a few minutes as we watched two men in dark uniforms holding a woman up as she sobbed. They guided her to a black car outside. Was she the wife of one of the 342 firefighters that died in New York that day? A sister? A mother? We just froze as she passed, nauseous with the crushing sadness of it all.

Everything we did those first weeks after the attacks felt like a string of cliches. But there is something primal about the way humans look for a light in the dark. I now know why people do this in times of uncertainty.

On the Sunday after the attacks, we came out for one more march, this time not for what had been lost, but for what might be lost in an angry wounded nation. We went to the street near our daughter’s preschool to show up for the many Middle Eastern restaurants and shops there.

My oldest watched the procession on the shoulders of Rakia, a waiter at a restaurant that’s been tolerating our messy, noisy bunch of kids for years now. As usual, Rakia reached down to hoist her up for a hug as soon as he saw her. His familiar mustached face was comforting normalcy.

Rakia’s own kids are in Syria and our visits seem to make him happy. There were times that he knelt next to our table to spoon-fed her carrots and couscous. Well-meaning New Yorkers passed with their signs saying “Muslims are not the Enemy,” and he held her high.

As the weeks passed, I’d read the newspaper and cry over the compounding tragedies unfurling everywhere. My kids won’t know what it was like before people started thinking of planes as bombs, I thought. I supposed they will ask what it was like “before.” I’m sure of one thing: I am not prepared to prepare them for this kind of world.

In the meantime, I find that one blessing given to the parents of young children is the lack of time to fret. We are grounded by their physical needs and joys.

So today, when I put my youngest girl into a sitting position and saw that she stayed upright all by herself, I turned off the TV and called everyone with the news, good news. I told them it was 5-months to the day since she’d been deposited on my chest in the birthing room by the aptly named nurse Celeste. She pointed out that the baby was lifting her head up slightly. Only minutes after confronting full gravity outside the womb, this speck of a person was already fighting it, pulling herself up so she could see our faces. “Strong girl,” declared Celeste.

During labor I told Celeste that I couldn’t do this; they’d have to find another way to get that child into the world. Celeste had me stop pushing for a minute so she could take my face in her hands. “You can do it,” she whispered. “You have to.” I hope Celeste was right about the baby and about me.

Here’s information on how to donate to the victims of the attacks of 9/11, first responders, and their families.

Write to me at: Susanna@Time.com, or via Instagram: @SusannaSchrobs. And if someone forwarded this edition of the newsletter, consider subscribing here. 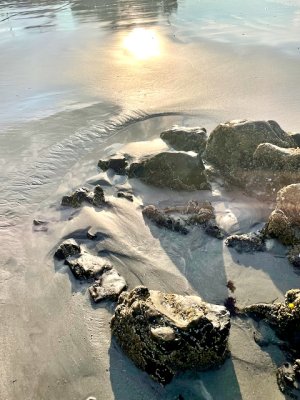 What Is 'Tragic Optimism' and Can It Help Us Make Sense Of This Moment?
Next Up: Editor's Pick