Two decades later, few would argue with that statement. And it probably isn’t the first or last time you’ll read a version of that idea this weekend, as the nation marks the twentieth anniversary of the terrorist attacks. Objectively, after the coordinated attacks on the U.S. that day, the nation’s post-Cold War footing suddenly felt less certain. America’s allies saw the country shed some of its projected invincibility, and its enemies saw the superpower to be more Potemkin than Pax Americana. Those views are as valid today as they were 20 years ago tomorrow, when the intensely blue skies over Washington, D.C., New York City and Shanksville, Pa., turned to smoke.

But some of the changes sparked by the deadly hijacking of four planes on the East Coast have proven less permanent, particular when it comes to Americans’ own attitudes. Many of the reactionary shifts in public opinion after 9/11 have reverted to pre-attack levels, according to fresh analysis by Pew Research Center. After the attacks, Americans suddenly embraced their neighbors, faith and government, but that didn’t last long. Confidence in journalism hit a high mark in the aftermath of the attacks as Americans couldn’t turn away from the coverage; that trust is long gone. So, too, is the sense of bipartisan potential that rang out from the steps of the U.S. Capitol that day in the form of an impromptu rendition of “God Bless America” sung by members of Congress, while the Pentagon still burned across the Potomac. These days, you can’t even get lawmakers to agree that a mob stormed the Capitol on Jan. 6 with the intention of overturning an election.

Put simply, the America that woke up on Sept. 12, 2001, didn’t stay awake for long. The country either quickly boomeranged to its before footing, as was the case in its lust for war and its sense of community, or continued on the path directed in tragedy, as has been the case in anti-Muslim sentiment that has grown stronger among Republicans since 19 radicalized extremists killed 2,977 people that day. And given more Americans than ever—64%—are telling Gallup that 9/11 forever changed their lives, it’s a feature worth considering.

One of the most dramatic swings has been in America’s sense of national pride, which became rabid after one of its worst days since the surprise attack on Pearl Harbor in 1941. Remember when demand for American flags spiked so high that the United States turned to foreign manufacturers to meet the need? On September 12, 2001, 88,000 U.S. flags were sold in Wal-Mart stores, compared to 6,400 on that day a year earlier. A few weeks later, Karl Rove met with Hollywood execs in Beverly Hills to get the studios on board with the government’s messaging on what would become its Global War on Terror. If you questioned any part of the sweeping response to the tragedy, your patriotism was called into question. Three days after the attacks, Rep. Barbara Lee was the lone vote against going to war in Afghanistan to go after its perpetrators, and she was called a traitor.

Those days of flag-wrapped infallibility are long gone, according to surveys. Pew found 79% of Americans in October of 2001 had displayed an American flag; in a separate survey last year, the organization found just 39% of Americans said they were proud of their country. A staggering 55% of Americans in 2002 told pollsters from The Washington Post that 9/11 had changed the country for the better. Now? Only 33% believe that, and 46% say the country has gotten worse.

Meanwhile, anti-Muslim sentiment among many Americans has gotten worse. One of the finest moments of the presidency of George W. Bush was his visit to Washington’s largest Islamic center just six days after 9/11. There, he declared the United States was not—and never would be—looking at Islam itself as the enemy. It seemed to help; in March of 2001, before the attacks, 45% of Americans told Pew they had a favorable view of Muslims, a number that would grow to 54% by November of that year. But in the intervening period, Bush’s Republican Party hasn’t exactly followed his lead. In 2002, 32% of Republicans agreed with the thesis that Islam encouraged violence. Last month, according to Pew, that number hit 72% support among the GOP.

Terrorism has become a consistently powerful concern for Americans, eclipsed only by the economy during the 2008 financial crisis. In fact, 74% of Americans stil say terrorism should be a top priority for Washington, which means no politicians worth their salt can ignore it, even as individuals’ intense fear seems to have faded along with interest in fighting terrorism overseas. In mid-September 2001, 77% of respondents told Pew that they supported retaliation for the attacks, even with troops on the ground. In May, well before the Biden withdrawal plan from Afghanistan collapsed into chaos, 62% of Americans told Quinnipiac they supported the exit, suggesting that public support for the war was gone even as al-Qaeda remains in that country.

In an era of social media platforms that spread misinformation, the decline of traditional newsrooms, and the rise of partisan cable screaming, the long view that these 20 years of surveys give should be invaluable to policymakers. And in them, they may even find some hints for what the next 20 years may bring. There are signs, for instance, that trust in institutions continues to fade and comity is a fleeting commodity. But this much is clear: the uptick in community seen 20 years ago this week in the wake of a devastating and brazen attack on U.S. soil proved temporary, while permission to inch away from America’s stated ideals started a slide we’re still dealing with 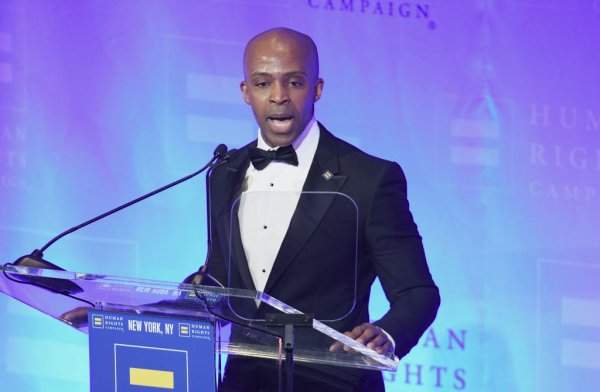 Why the Human Rights Campaign Had to Fire Its President
Next Up: Editor's Pick