Cry Your Heart Out: The 11 Best Breakup Albums Ever Made

Listening to a good breakup album is a dangerous act: if consumed at the wrong time, it can kill your joy, resurrect painful flashbacks, re-break your heart, reduce you to a puddle of misery. But breakup songs also make up a huge portion of the most beautiful songs ever written. They help us process our pain; they serve as crucial substitutes for reckless acts. They make us feel less alone.

Last week, Kacey Musgraves, one of the great modern practitioners of the breakup song (see: “Space Cowboy”) released her fourth album, “Star-Crossed,” accompanied by a film of the same name. Musgraves filed for divorce from musician Ruston Kelly a year ago, and she’s billed the album as a “tragedy in three parts”; its 15-song arc chronicles an epic love story that ultimately ends in disaster.

“Star-Crossed” got us in our feelings and thinking about our personal favorite break-up albums. Of course, there are the undeniable universal choices, like Fleetwood Mac’s Rumours, Joni Mitchell’s Blue Bob Dylan’s Blood on the Tracks and Kanye West’s 808s and Heartbreak. But these are the ones that come, for us, from a more personal place; that bring back memories too embarrassing to share in public. In lieu of broadcasting those, here are the albums that guided us through those overcast days; that can still make us think someone is chopping onions in the next room.—Andrew R. Chow

Phoebe Bridgers, Stranger in the Alps

Bridgers received an onslaught of attention and acclaim for last year’s tremendously sad Punisher. Her 2017 album, Stranger in the Alps, makes Punisher sound like a cheerful day at the beach. Over quietly lapping electric guitars and droning strings, Bridgers sings of drowning, of graveyards and ghosts, of being emotionally tormented and breaking another’s heart. I listened to that album on repeat that year, as if dunking my head in a lake over and over again to purify myself. The most famous song is “Motion Sickness,” which ossifies her real-life dalliance with Ryan Adams. But often the most agonizing lyrics are the vaguest ones, allowing the listener to effortlessly project her heartbreak onto their own: “Do you feel ashamed,” she asks on “Scott Street,” “when you hear my name?”—A.R.C.

Despite his slapstick name, Kris Kristofferson has long been a standard bearer for misery. While he’s penned breakup classics for other artists, like Johnny Cash and Ray Price, he sounds just as good singing them himself on his debut album, released in 1970—and particularly on the now-classic “Sunday Mornin Comin’ Down,” which recounts a two-beer breakfast. The rest of the album flits in and out of despair and acceptance, each track offering a different tonic for a different stage in the grieving process. “There’s no need to watch the bridges that we’re burning,” he sings on “For the Good Times.” “Make believe you love me one more time.”—A.R.C.

Few can give voice to solitude quite like bluesmen. One of my favorite blues records was recorded in 1962 by Williams, a Louisianan guitarist who spent years in the Louisiana State Penitentiary before getting released. On Free Again, Williams’ slide guitar is wonderfully punchy and textural, and he takes on his hardships with equal parts despair and humor, especially on the song “I’ve Grown So Ugly.”—A.R.C.

While many other songs of sadness are shrouded in minimalism, Sampha opts for bombast on his 2017 album Process, giving his sadness a frantic, epic quality, especially on the hyper-visceral “Blood on Me.” Few modern voice boxes sound as desperate as his—especially when he strains toward his upper register to plead for the return of a loved one who has disappeared. Halfway through the album, however, Sampha swears off other people entirely, sighing resignedly: “No one knows me like the piano.” Listening to the hollow plinks that surround him, it’s hard not to agree.—A.R.C.

Despite being mostly known as the abstract and sarcastic alternative rapper-guy for most of the ‘90s, Beck can write a damn fine heartfelt tune. However, the 12 tracks that make up 2002’s Sea Change are on another level and anyone who has ever listened to this album post-breakup knows exactly what I’m talking about. Written during an introspective period shortly following the end of a nine-year relationship with his then–fiancée, these songs evoke a sense of somber melancholia that feels truly genuine and could only be written by someone going through it. Musically, Beck teamed up with frequent collaborator Nigel Godrich to create a sound that falls somewhere between a Nick Drake album and Serge Gainsbourg’s Histoire de Melody Nelson. It has huge sweeping orchestral arrangements throughout, but never loses its sense of intimacy. It’s a sad album that digs deep into those feelings of unexpected change and loss, but it also beautifully conveys that we’re not alone in these feelings. If anything, it affirms we’re alive and others have felt this too. That might be true of most breakup albums, but in 2002 this one hit me right in my 15-year-old heart.—Chris Grasinger.

Not only is Converge’s 2001 masterpiece Jane Doe the ultimate ‘epic handshake’ between metal and hardcore, it’s also a very sincere response to the anger and sadness that comes along with a relationship deteriorating. Vocalist Jacob Bannon’s breakup woes are at the center of this album both in the lyrics and in the emotional performance he gives throughout. While admittedly most of my go-to breakup albums tend to lean towards melancholy and sentimentality, Bannon’s brutally honest and raw energy is as effective as any slowed down ballad could ever be. Jane Doe is one massive boundary-pushing explosion of riffs and emotion that set a new high-water mark for heavy music. It’s no surprise that this band and this album means so much to so many.—C.G.

There’s a decadent, melodramatic side to heartbreak—especially when you’re young enough that the feeling is a novel one—and no one captures it better than goth rock’s most romantic stadium act. Brazenly maximalistic in its shimmering orchestral passages and frontman Robert Smith’s moaning tenor, as well as in the dilated runtimes of individual songs, Disintegration (1989) luxuriates in loneliness, longing, betrayal, degradation. “Pictures of You” packs a particularly devastating punch, as photos of a lost love send the singer down a spiral of reminiscence and regret. “If only I’d thought of the right words,” Smith croons, “I could’ve held onto your heart.” Who among us can honestly say that we’ve never been tortured by the very same thought?—Judy Berman

Is indie legend Liz Phair’s debut album about breaking up with a man, a music scene, rock ‘n’ roll machismo or the patriarchy at large? Yes. I mean, why pick just one? In 18 tracks conceived as a response to the Rolling Stones’ Exile on Main Street, the young singer-songwriter appropriated their bluesy, libidinous jangle to stare down the guitar bros of early-’90s Chicago, put one-night stands and rude roommates on notice and out-perv those who would objectify her. Decades of willful misreadings notwithstanding, at its core the record is about renegotiating your relationships—to art, to work and, yes, to love—on your own terms. “I felt like it was really important to want overtly and to lust and to be able to own my own sexuality,” Phair has said. “I was scared to do it, but I felt like it was important to take the territory back for myself.” In other words, as she so memorably drawls on the album opener: “I keep standing 6’1’’/ Instead of 5’2’’/ And I loved my life/ And I hated you.” Declarations of independence don’t get much bolder.—J.B.

Of Montreal, Hissing Fauna, Are You the Destroyer?

Breakups can change a person, but it’s rare to see a transformation as literal as the one that takes place on this 2007 album by Of Montreal. Inspired by real events, side 1 renders the dissolution of a marriage in the same sort of upbeat, neon-hued psych-pop that made the Athens, Georgia, act an indie sensation in the late ‘90s and early aughts. “I spent the winter with my nose buried in a book/ While trying to restructure my character,” confesses frontman and songwriter Kevin Barnes, “because it had become vile to its creator.” Side 2 sends Barnes into the twisty, noisy gyre of a 12-minute track called “The Past Is a Grotesque Animal.” He comes out a truly different character—one who’s swaggering, gender-fluid, dedicated to the funk and ready to break hearts anew.—J.B.

The Mountain Goats, Get Lonely

In their almost 30-year run, The Mountain Goats have released a number of themed albums that deal with everything from a group of methamphetamine addict friends to Dungeons & Dragons. But frontman John Darnielle’s signature frenzied, authoritative voice took a decidedly doleful turn with their 2006 release Get Lonely, an album about the direct aftermath of a dissolved relationship. In stark contrast to 2002’s Tallahassee, which gleefully explored a volatile marriage imploding under its own dramatic weight, Get Lonely drips no poison and brooks no resentment. Instead, it sits with the emptiness that lingers after a break up: the absence of company, the awkwardness of lost routines and the persistent echoes of things left unsaid. With a then-uncharacteristic softness, Darnielle sings about taking long solo walks down highway shoulders, accidentally making coffee for two and feeling compelled to drink it all, the stunned shock of seeing the ex on a crosstown bus, and feverishly scanning for distractions. In the 15 years since it came out, and after many, many listens, I often think about Pitchfork’s review that followed its release. The writer Tom Breihan had told Darnielle he was still wrapping his head around Get Lonely. Darnielle, perhaps jokingly, asked if Breihan had a significant other and reportedly said, “I hope she leaves you. Then you’ll understand it.”—Peter Allen Clark

The definitive break-up album of Taylor Swift’s discography, Red is an intimate and energetic look at heartbreak. When it arrived in 2012, the album introduced Swift as an artist to take seriously. Suddenly, the guessing game that followed her songs evolved into something more nuanced. It didn’t matter that “All Too Well” was about a specific someone (cough, Jake Gyllenhaal) because the sentiment at its core is so universal: “it was rare, I was there, I remember it all too well.” Is there anything more crushing than remembering a relationship’s most mundane moments and grieving what was and will never be? She asks this question again in the moody and appropriately melodramatic track “Sad Beautiful Tragic.” But Red still has its boppy moments of relief, from the punchy, scream-able lyrics of “I Knew You Were Trouble.” to the intense and playful chorus of “We Are Never Ever Getting Back Together.” The album, which Swift is re-releasing in November, puts a more grown-up lens on heartbreak and acknowledges the strange amalgam of emotions that accompany realizing that losing love is its own type of grief. “We’re happy, free, confused and lonely in the best way,” she belts on “22,” “it’s miserable and magical, oh yeah.”—Annabel Gutterman

Write to Annabel Gutterman at annabel.gutterman@time.com and Peter Allen Clark at peter.clark@time.com. 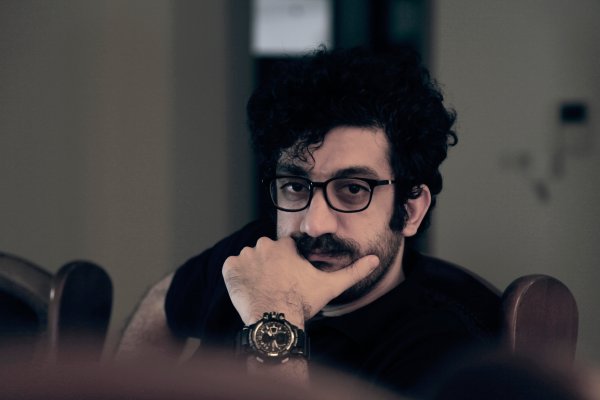 Meet the Iranian Musician Who Keeps Risking Imprisonment for His Music
Next Up: Editor's Pick