Alphonso David was fired from his role as president of Human Rights Campaign (HRC) Monday night, just a month after the board had elected to extend his contract as leader of the powerful advocacy group—and the largest LGBTQ civil rights organization in the world—for five years. HRC said David’s firing came after a board-led investigation concluded that he had violated his contract when he consulted on former New York Gov. Andrew Cuomo’s response to sexual harassment allegations in Dec. 2020, as first detailed in a report by the New York Attorney General’s office on efforts by the former governor’s aides to discredit his accusers.

“This is a painful moment for our movement,” HRC and HRC Foundation board chairs Morgan Cox and Jodie Patterson said in a statement released on Monday night. “While the Board’s decision is not the outcome we had ever envisioned or hoped for in terms of Mr. David’s tenure with HRC, his actions have put us in an untenable position.”

In a statement to TIME on Tuesday, David said that, “before the board took the action they did, HRC under my leadership was extremely strong.” He added that the “goal [of HRC’s investigation] has always been to get to the truth, and this process never got to the truth.”

Over the past few days David has repeatedly called for the results of HRC’s investigation—which was conducted with the assistance of the law firm Sidley Austin—into his conduct be made public, arguing that the board’s co-chairs privately told him that the investigation found no evidence of “wrongdoing” on his part, but asked him to consider resigning anyway as the issue had become a “distraction.” (David does not deny the New York Attorney General’s findings, but rather that they constituted anything that violated his contract with HRC.)

But when asked whether the results of the investigation would be released, an individual familiar with the boards’ decisions told TIME Tuesday that would not be possible. The report was delivered orally to the boards, but not written down, the individual explained, so “there is nothing to release.”

David’s departure had already become steeped in controversy, as both he and HRC’s board chairs have publicly accused the other of lying. The disclosure that there is no formal write-up of the investigation is likely to further inflame matters.

“I asked for the report, they refused. They lied about producing the report. Now that they are being called to task, they tried to shut me up,” David tweeted Monday night. “Expect a legal challenge.”

A source familiar with the situation tells TIME that HRC’s campaign board voted unanimously to terminate David, while HRC’s foundation board also voted to terminate him with two abstentions. Joni Madison, the organization’s current Chief Operating Officer and Chief of Staff, will serve as interim president, while the board looks for someone to fill the position.

In an email sent to HRC staff Monday night reviewed by TIME, Cox and Patterson said David’s comments “contained a number of false and misleading statements about the investigation and his status within the organization,” adding that he “alone bears responsibility for what he did and the consequences.”

HRC did not respond to questions regarding to what extent HRC vetted David’s work for Cuomo before extending his contract for five more years in early August, which it heralded—and promoted—as historic at the time.

“Everything I’ve said about this process has been true,” David told TIME Tuesday when asked to comment on HRC’s allegation that his comments on the situation have “included significant untruths.” “It’s perplexing for them to claim I’ve said things that are untrue about the investigation, without saying what those untruths are, when they haven’t even provided me or anyone with the findings of the investigation.”

The civil rights attorney was lauded by HRC’s board as the future of the organization until a report by New York Attorney General Letitia James alleged David helped advise former New York Gov. Andrew Cuomo’s response to allegations of sexual harassment made by Lindsey Boylan, a former Cuomo aide. David, who called for Cuomo’s resignation after the release of James’ report, had served as counsel to Cuomo prior to joining HRC.

James’ report alleged that in December of 2020, while president of HRC, David gave a memo containing confidential information on Boylan’s employment history to an adviser on Cuomo’s team. (David has said that he felt he had a legal obligation to give the memo to the Governor’s office.) James’ report also alleged David consulted on a letter meant to discredit Boylan.

An individual familiar with the board’s decisions tells TIME that David did not tell HRC that he was working with Cuomo’s team last year, or, subsequently, that he had been speaking with the New York Attorney General’s office. While not disputing this, a source familiar with David’s thinking says that he was advised by counsel that disclosing his conversations with the Attorney General’s office could be a crime, and that his communications with Cuomo’s office were also subject to transitory privilege.

David is not the only progressive leader embroiled in the downfall of Cuomo, who announced his resignation on Aug. 10 in the wake of James’ conclusion that he sexually harassed at least 11 women, which he denies. Tina Tchen, CEO of the anti-sexual harassment charity Time’s Up, resigned on Aug. 26 in response to allegations that the organizations’ leaders advised the former governor. On Sept. 4, Time’s Up said the entire board had stepped down.

After the release of James’ report, HRC faced fierce criticism from advocates outside—and reportedly within—its ranks for maintaining David as the leader of an organization with such a focus on equality and justice.

In its statement Monday night announcing David’s firing, HRC said his conduct had caused “material damage” to HRC’s interests and reputation, and impaired his ability to serve as the public face and voice of the powerful group—citing the media frenzy and “hundreds of calls, emails and other negative communications HRC has received from staff, members of the Board of Governors, volunteers, program partners, general members, supporters, corporate partners, political figures and more.” 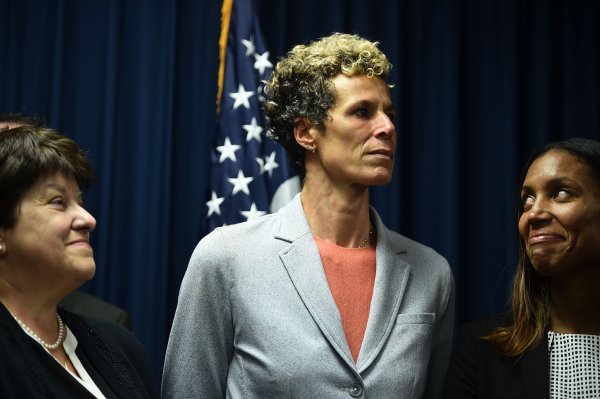 I Survived Bill Cosby. And I Will Not Be Defeated by His Release
Next Up: Editor's Pick