As Hurricane Ida pounded the coast of New Orleans with downpours and 150-mile-per-hour winds on the afternoon of Aug. 29, New Orleans Emergency Medical Services had to reverse course after spending 18 months running around the city at full speed battling COVID-19: staying put. For 13 hours and 41 minutes, as the storm’s worst shook their community, the workers hunkered down at their base, keeping themselves safe to be ready to protect others from whatever came next. However, the deluge of 9-1-1 calls didn’t come to a halt as EMS waited out the storm. So, after EMS workers were given the go-ahead to rush back into the city streets, they worked through the massive queue that developed, putting in 12-hour-shift after 12-hour -shift to keep up with the volume of calls. Within the first day and a half alone, their team responded to 323 calls.

New Orleans’ levee held, protecting residents from the Gulf’s surging waters, but power is still through much of the city amid soaring humidity and over 90°F heat, meaning that hundreds of people a day remain in need of help. Over the past week, residents have called in to report heat exhaustion, asking for water or a place to cool down, as well as carbon monoxide poisoning—dizziness, shortness of breath, fainting—largely due to electric generators, whose engines emit carbon monoxide and need to be used outdoors only, improperly placed indoors or near windows. Still others reached out in search of essential health care they could no longer access, such as oxygen tanks, refrigerated insulin or IVs. Then there were the more typical emergency calls: heart attacks, strokes, overdoses. Finally, there were the calls that have haunted New Orleans since winter 2020: flu-like symptoms, which as EMS has come to recognize, are most likely cases of COVID-19.

For any first responder, especially in a place as vulnerable to storms as Louisiana, weather disasters are part of the job. September 2021, however, has brought a unique challenge to New Orleans’ EMS: dealing with two disasters at the same time, each of which threatens to exacerbate the other, and which have pushed the city’s most essential emergency resources to the brink.

Water tanks storing water are delivered outside the main campus of Ochsner Hospital in New Orleans on Wednesday, Sept. 1, 2021, as power outages continue due to the impacts of Hurricane Ida.
Edmund D. Fountain—The New York Times/Redux

“I liken it to using a small spoon to get water out of a sinking ship,” says Prashanth Balaraman, a 21-year-old emergency medicine technician (EMT). “The entire EMS community, but especially here in New Orleans, has just been kind of suffering for a year and a half, and are just kind of taking blow after blow. Even though we’ve stayed resilient and stayed upright and strong, it’s just the fact of the matter that we’re [an] undermanned and overworked profession.”

In the last two months, the New Orleans health care system has been grappling with a surge of COVID-19 cases driven by the Delta variant, which, for EMS workers, has meant an endless stream of calls for help, hospitals inundated with patients and a heightened risk of contracting the virus themselves. (Balaraman, when he spoke to TIME, had just returned to work a week before the hurricane hit after recovering from COVID-19 despite being vaccinated). To handle the dual challenge of reduced staff and a surge in COVID-19 cases, New Orleans EMS put out a call in mid-August for reinforcements from the state and federal government, requesting additional EMTs, medics and ambulances, ultimately receiving surge ambulances and teams from across the country.

At the same time, however, New Orleans EMS was stretched thin even before either crisis began. Jonathan Fourcade, a public information officer for New Orleans EMS, says that the endless grind of being on the road as an EMS worker—with little time for breaks, median pay of about $36,000 a year, and high personal safety risks— has led to chronic understaffing at New Orleans EMS, especially among paramedics, who have the most advanced medical training. His biggest worry, he says, has been the wait times after the public call for help.

“Of course, if somebody calls and they’re in cardiac arrest, or uncontrolled bleeding, or signs of a stroke, or any kind of very critical emergency, of course, they’re going to be on the top of the list,” says Fourcade. “But there are times when someone calls 9-1-1 for someone in cardiac arrest, and there’s no units available. It happens every day. It happened before the hurricane. It happened before COVID.”

That said, the hurricane and its aftermath have led to some patients waiting even longer than normal for help. EMS workers told TIME that while hospitals have gotten good at directing ambulances to locations that have the resources needed to care for patients, some facilities were forced to stop taking new patients entirely as they deal with lost power and damage from the storm. EMS workers, though, can’t just say “no” to those in dire need.

“There isn’t the option to be like, ‘sorry, sir, I can’t take you to the hospital because there’s flooding.’ It’s like, ‘Okay, let me try to figure out which path I can possibly take to get them there,’” Alexia Archaga, a 26-year-old paramedic. “There’s been so many times where we’ve just had to figure it out.”

At the same time, EMS workers are grappling with the fear that the ad hoc measures needed to help their community survive the storm are contributing to the ongoing pandemic. Throughout the storm’s aftermath, sick and displaced people have been forced to gather at cooling stations, friends’ homes and emergency rooms—places that offer electricity, cool air and water, but increase the risk that SARS-CoV-2 keeps spreading, because of the close quarters and number of people coming in and going out. As Dr. Emily Nichols, director of the Louisiana EMS explains it, the virus is never far from emergency responders’ minds, but they must deal with the most immediate crisis at hand—even if that means a heightened risk of enabling the virus to keep spreading. “We know that social distancing helps prevent the spread of COVID, but we know that there are other life or death matters to attend to simultaneously,” says Nichols. “We’re really trying to just continue that messaging: Don’t forget that there’s still a pandemic.” 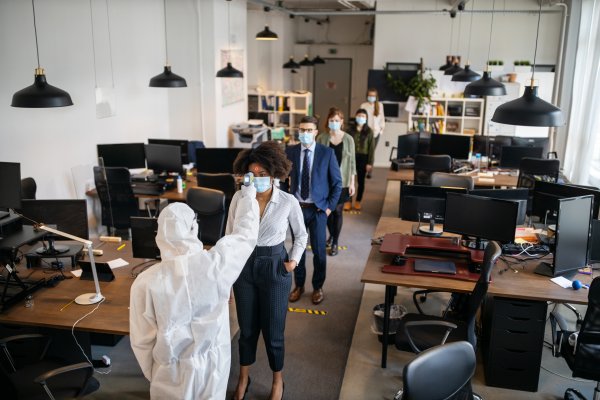 Recovery From Severe COVID-19 May Provide Better Future Protection Against Some Variants
Next Up: Editor's Pick