Some of us have memories of things that didn’t even happen in our lifetimes. We’re drawn to a specific era, or certain relics of the past, for reasons we can’t explain. Why are we sometimes drawn to music and movies and clothing that speak to the people we might have been had we been born 10, 50 or 100 years earlier? Is there a word for the nostalgia we feel for a life we never actually lived, but wish we had?

Whatever that word is, Thomasin McKenzie’s character in Edgar Wright’s half-brilliant thriller Last Night in Soho—playing out of competition at the 78th Venice Film Festival—is the poster girl for it. McKenzie plays Ellie, an aspiring fashion designer and third-generation seamstress who takes pride in being able to make her own clothes, to create any vision of herself she pleases. This is something Wright shows us, rather than tells us, in the movie’s stunning opening scene: We see Ellie dancing down a hallway—the song is Peter and Gordon’s gorgeously wistful 1964 “A World Without Love”—and into her teenage bedroom, wearing a smashing early-1960s-style bouffant dress cleverly made from newspapers. Her room, and her LP collection, constitute a shrine to a past that’s not her own: CARNABY is spelled out in cartoonish letters on her bedroom door; she’s crazy about Cilla Black and the Kinks, music that was pouring out of transistor radios long before she was even a tadpole.

Read More: The 23 Most Anticipated Movies of Fall 2021

Ellie lives with her grandmother in Cornwall. Her mother has been dead for more than 10 years, though Ellie has a gift—her mother periodically appears to her in vivid, realistic visions. When Ellie moves to London to study fashion design—after a run-in with a terrible roommate, she rents a top-floor room from a kindly landlady, played by Diana Rigg in one of her final film roles—her hypersensitive powers of perception kick into overdrive. When she goes to sleep at night, she’s zapped to the London of the mid-1960s, where she becomes the mirror-twin of a glamorous aspiring signer named Sandy (Anya Taylor-Joy). Sandy, alluring in a blond Catherine Deneuve bob and swooping eyeliner, has invaded Ellie’s dreams, both seducing her and inspiring her—at school, during her waking hours, Ellie’s designs are on fire, and she strikes up a flirtatious courtship with an adorable classmate (played by Michael Ajao).

If the first third of Last Night in Soho were a movie unto itself, it would be one of the most stylish and seductive pictures of the year, an affectionately rendered love letter to an era that Wright himself is too young to remember but clearly loves. When Sandy takes the stage during an audition for an a capella rendering of the Petula Clark hit “Downtown,” my heart skipped a beat. I was four when this song came out, and it represented everything I wanted in life at the time: City lights, a pink chiffon dress and a pair of silver slingback shoes. All three of those things, and more era-specific delights, are right there in Wright’s movie, as if he had read my own plaintive childhood desires and put them onscreen.

But Last Night in Soho takes a sharp and suddenly dark turn. (The movie was cowritten by Wright and Krysty Wilson-Cairns.) That isn’t a problem in itself, if you consider, say, David Lynch’s Mulholland Dr. as a model: The first half of that picture is a dream you don’t want to wake up from; the second half is the nightmare price you pay for buying the dream, but it too is an opiate reverie, and it provides context for all that came before it. That movie’s second half is like a blackened-gold setting for the diamond of the first.

To reveal too much of Last Night in Soho would be unfair to the movie and to anyone who’s eager to see it. But at a certain point, the plot becomes disappointingly unwieldy; by the end, it has cracked into dozens of irreconcilable pieces, turning us against characters we want to sympathize with and trying to draw out sympathy for others who don’t deserve it. It’s wonderful that Wright has cast three marvelous 1960s actors in his movie: Rigg, Terence Stamp and Rita Tushingham (maybe best known for her role in the 1961 A Taste of Honey). But Stamp’s role is pointless and weirdly truncated, a waste of an actor who, gorgeous at age 83, is one of our great silver lions. And although Wright dedicates the movie to Rigg, her character gets a jarring, thankless arc. Last Night in Soho soars at the beginning, only to crash in the end. It’s a broken promise—a downtown that, unlike Petula’s, only lets you down. 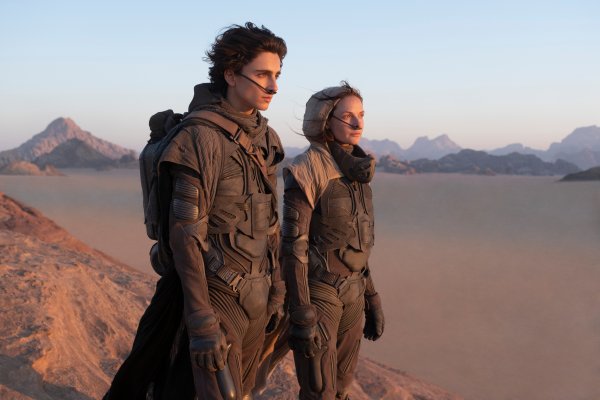 Denis Villeneuve's Take on Dune Is an Admirably Understated Sci-Fi Spectacle
Next Up: Editor's Pick