Hurricane Ida Raises the Question: How Can Cities Keep Subways Safe in an Era of Climate Crisis Flooding?

A flooded subway station in the Bronx in New York City, where service was disrupted due to extremely heavy rainfall from the remnants of Hurricane Ida on Sept. 2, 2021.
David Dee Delgado—Getty Images
By Ciara Nugent

As the remnants of Hurricane Ida passed over the northeast Wednesday night, dumping a record-shattering 3.15 inches of rain on New York City in a single hour, water began to pour into the city’s subways.

The system flooded in 46 locations and the MTA cut service across all lines overnight. Rescue operations had to be carried out to reach those unlucky enough to be caught in at least 15 subway cars stranded by flood waters and hundreds more people were rescued by police from stations. No one was injured, the MTA said.

The worst of the storm, which prompted city authorities to issue New York’s first ever flash flood emergency, has passed. But the events of summer 2021 have forced commuters all over the world to reckon with the vulnerability of their underground train systems as the climate crisis makes heavy rains and storm surges more common. Back in July, pedestrians in New York and London shared videos of station entrances almost entirely submerged. Later that same month in the eastern Chinese city of Zhengzhou, subway flooding reached a nightmarish worst-case scenario: hundreds of riders were trapped in cars as waters rose around them. Fourteen people drowned.

Public transit agencies from New York to Tokyo have undertaken massive and expensive projects in recent years to make their systems more waterproof, says Snigdha Garg, head of adaptation research and performance at C40, a coalition of cities focused on the climate crisis. “But with the size of these systems, the age, the cost—no city in the world is completely there: we will keep seeing cases of flooding.”

Flowers at the entrance of Shakoulu subway station to mourn those who died after getting trapped in a flooded subway on July 28, 2021 in Zhengzhou, Henan Province of China.
Cai Xingzhuo–JIEMIAN NEWS/VCG/ Getty Images

Safety is “in the DNA” of public transit agencies, according to Corentin Wauters, a rail expert at the International Association of Public Transport, and as the threat of extreme weather has grown in recent years, most major systems have developed plans to keep riders safe.

“In Paris, for example, where the last really major flood occurred more than a century ago, [the local transit agency] has a very well-established emergency plan,” Wauters says. The agency has developed a large stockpile of sandbags, aluminum barriers and concrete blocks to protect the metro, which opened in 1900, and carries out regular drills for transit workers and other city government departments to work together to deploy them.

Newer systems have climate protection embedded in their design, Wauters says. In Bangkok’s subway, which opened in 2004, stations in low-lying areas are raised around four feet aboveground with steps to enter, and have heavy, flood-proof doors. When a strong monsoon caused widespread flooding across Thailand, Wauters say, the subway maintained uninterrupted service.

Adapting older systems to the climate-crisis-era is complicated, though. Despite recent images of waterfalls gushing over platforms, and rider frustration over service failures, public-transit experts actually point to New York as a global leader in flood resilience. Since 2012’s Hurricane Sandy, which flooded nine subway tunnels and let millions of gallons of equipment-damaging salt water into the network, the MTA has spent $5 billion on repairs and updates.

A colossal amount of work was needed. New York’s subway, which opened in 1904, was not designed to deal with the level of rainfall or coastal flooding that the city is now experiencing and can expect in future, says Janno Lieber, acting head of the MTA, speaking to TIME in August, before Ida struck. “Our system was built mostly through what you call ‘cut and cover’—where people basically dug big ditches and created subways that are only five or 10 feet underground,” he says. “We have a lot of vulnerability to surface water conditions. So, we’re attacking all of the points of vulnerability and where water can get in.”

The N.Y. MTA has revamped 11 under-river tunnels that were particularly vulnerable to coastal flooding. That included simple interventions, like moving essential cables and equipment up high on racks inside tunnels, as well as massively expanding the pumping system which clears water out of the train network. (Even on a dry day, the system pumps 13 million gallons of water out.) Water-tight doors that can be closed during storms have been placed at tunnel entrances and similar systems are being rolled out at vulnerable station entrances and stairways. Some 3,000 vents have been covered, either permanently or with temporary covers. The MTA has also spent almost $1 billion to protect train yards—often particularly vulnerable due to their positions at the end of lines near the coast—by adding new flood barriers and drainage systems.

But, though Lieber expects all those safeguards to keep seawater out of the subways during a Sandy-style storm surge, they weren’t enough to prevent rainwater disrupting services and stranding passengers this week. Flash floods, caused by sudden heavy rainfall, are expected to become more frequent as the climate warms and—as events in Zhengzhou’s subways showed—they can have deadly consequences for the public.

Lieber says that New Yorkers shouldn’t fear the fatal consequences of flooding that took place in Zhengzhou. Chinese state media reported that there was an unusual delay in suspending subway service, and that the metro company’s centralized power structure may have played a role. “The operators did not have the authorization, because of the way their system works, to actually stop and not proceed based on [the water levels] they were seeing. Our operators do have that authority, number one. Number two is we have an operating principle that when water reaches a certain level above, more or less the top of the rail, you don’t proceed any further. So, our passengers, I believe, needn’t be concerned that anybody will be driving into a condition like what happened in China.”

Yet a fragile subway system has the potential to impede passengers in other ways. It is an equity issue, since people who are reliant on subways in U.S. cities are disproportionately Black and Latino communities and people on low incomes. If subways increasingly must be closed for long periods for safety reasons, transit-reliant riders will have difficulty getting to and from work—which is especially a problem for low-income individuals who are more likely to have jobs that cannot be done from home.

Making subways and other public transit modes more resilient to extreme weather will require a city-wide approach to flood engineering, Garg says. “Transit agencies can only do so much if drainage and water absorption across the city aren’t there.”

In New York, the large areas covered by asphalt and the scarcity of green space make the city particularly vulnerable to large volumes of surface runoff during storms. Some of the flooding in subway stations this summer can be traced to the sewers that were overwhelmed. Improving coordination between the city government—which controls the sewers and streets—and the state government—which controls the MTA—could be key to managing future storms. Successive state governors and city mayors have struggled to do that, though there may be an opening to improve relations as new faces take over both roles this year. Lieber, who began his role last month, says he intends to begin joint work with the city government to “identify vulnerabilities in high ground areas which are away from the coastal flood zones.”

When it comes to reducing the pressure on subways systems during storms, New York could stand to learn from other parts of the world more used to dealing with floods. Rotterdam, in the famously low-lying Netherlands, has invested heavily in nature-based solutions to become what urban design specialists call a “sponge city.” Since 2008, the city has added more than 250,000 square meters of water-absorbing green roofs to its buildings, expanded parks, and planted vegetation along tramlines. Tokyo, which straddles five river systems, spent decades and billions of dollars developing a cavernous drainage system. Completed in 2006, it is designed to protect the city from many kinds of flood events, including tsunamis and dam bursts.

These kinds of projects are expensive, and intergovernmental collaboration, at least in New York, has historically proven complicated. But climate advocates hope the increase in disruption and devastation from floods will force more action on adapting public transit. “We’ve got to learn to live with the water,” Garg says. “Because the water will come.” 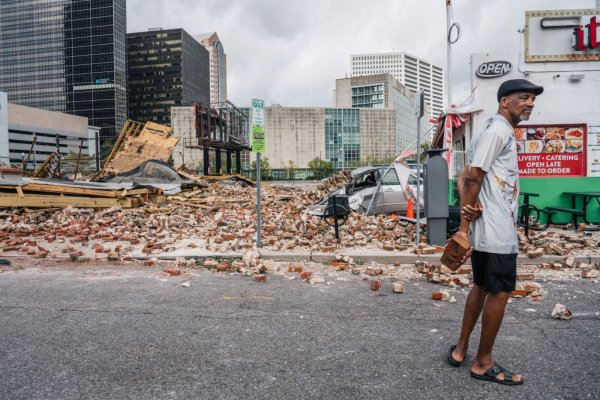 Can Hurricane Ida Move Public Opinion on Climate Change?
Next Up: Editor's Pick