Only a few dozen women journalists are still working in Kabul following the Taliban takeover of Afghanistan—despite the Islamist group’s assurance at a press conference that they would honor women’s rights under Islam.

Among the women who fled is female news anchor Beheshta Arghand, who interviewed a senior Taliban leader on air in August. She told CNN that fear of the Taliban drove her to leave the country.

Zahra Joya, who founded Rukhshana Media, a media organization that acts as a platform for women journalists, also left Afghanistan last week. “I decided to leave the country as soon as possible, I felt that I was at risk,” she tells TIME from quarantine in the U.K.

Afghan journalist Zahra Joya fled to the U.K. after the Taliban takeover of Kabul.
Photo courtesy of Zahra Joya

Just 39 women journalists are still formally working in privately-owned radio and TV stations in the Afghan capital, according to Reporters Without Borders (RSF) its partner organization, the Centre for the Protection of Afghan Women Journalists (CPAWJ). That’s a precipitous drop from the 700 women journalists working in 2020.

“Women journalists must be able to resume working without being harassed as soon as possible, because it is their most basic right, because it is essential for their livelihood, and also because their absence from the media landscape would have the effect of silencing all Afghan women,” RSF secretary-general Christophe Deloire said in a press release. “We urge the Taliban leadership to provide immediate guarantees for the freedom and safety of women journalists.”

Joya is still in contact with several women journalists on the ground in Afghanistan, and she continues to publish their work on Rukhshana Media, though some of them are now using pseudonyms. “I am very worried for their safety. It’s very painful and hard,” she says.

In Afghanistan’s provinces, nearly all women journalists stopped working as the Taliban took control, according to the survey. More than 1,700 women were working for media outlets in the provinces of Kabul, Herat and Balkh in 2020.

International observers, rights groups and Afghan women have all expressed concern over what Taliban rule will mean for women in Afghanistan. The Taliban has promised to protect human rights, but it made similar promises when they took over the country in 1996, before banning women from work and education, largely confining them to the home.

This time, the Taliban has encouraged women to return to work, and allowed girls to return to school. But members of the Taliban have barred at female journalists Khadija Amin and Shabnam Dawran from their jobs at the public broadcaster Radio Television Afghanistan, according to the Committee to Protect Journalists (CPJ). RTA employed 140 women journalists until mid-August, but none of them have gone back to work at the state TV channels, according to the report.

Joya says that many of her friends and colleagues are staying at home out of fear. “I don’t believe the Taliban. It’s very clear that they won’t accept women’s rights or human rights,” she says.

Zan TV (Dari for “Woman TV”) and Bano TV (Dari for “Mrs TV”) have ceased all activity since Aug. 15, according to the report. These privately owned TV channels employed more than 80 women journalists.

A female journalist working in the southeastern province of Ghazni said that the Taliban warned that her radio station could continue operating, but without music and women’s voices, according to the report.

Read More: What Will Happen When the World Looks Away?’ An Afghan Teacher on How the World Can Protect Girls From the Taliban

A Taliban spokesman told the BBC that there was room for women in the new government, but “in the top posts, in the cabinet, there may not be women.”

U.N. High Commissioner for Human Rights Michelle Bachelet said on Aug. 24 that the treatment of women and girls is a “fundamental red line” that should not be crossed.

Joya says that although she’s no longer in the country, she plans to continue her work to highlight Afghan women’s’ voices. “I believe we should struggle against the Taliban and continue to fight for our rights,” she says. “And I’m trying to continue my work.” 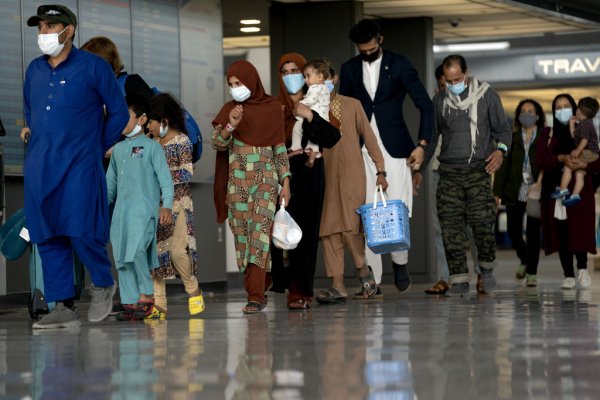 Let's Not Rush to Judgment About the Withdrawal From Afghanistan
Next Up: Editor's Pick