Repairing the one road through Denali National Park after a rock slide in 2019.
NPS Photo/WeeBee Aschenbrenner
By Andrew R. Chow / Denali, Alaska

For decades, the rangers at Denali National Park in Alaska were easily winning their battle against a slow-moving landslide underneath the park’s only road. Now, due in part to the effects of climate change, they are losing very badly.

This summer, the National Parks Service has been frantically dropping 100 dump-trucks-worth of gravel every week on the top of the Pretty Rocks Landslide in an effort to keep up with its accelerating pace, which is the result of rapidly thawing permafrost in the country’s fastest-warming state. Two weeks ago, as the landslide hit unprecedented speed, causing the ground around it to undulate with each passing truck, the team conceded defeat and closed the back half of the park weeks earlier than anticipated. The closure is bad news both in the short term—with hundreds of camping and hotel reservations cancelled on a local economy that depends on tourism—and a scary omen for an entire state that rests on similarly thawing terrain.

“This is the canary in the coal mine for infrastructure disruption in Alaska,” says Simon Hamm, the owner of the lodge Camp Denali, who was forced to lead an evacuation of 70 guests and staff and shut down his business weeks early, resulting in potentially hundreds of thousands of dollars of loss in revenue. “If things continue on the path they’re on, it’s not going to just be Pretty Rock—it’s going to be half of the Alaskan highway system.”

Denali National Park is one of the U.S.’s largest national parks at 6 million acres, and sits about four hours north of Anchorage. While the entrance to the park is certainly beautiful, many people prefer to hop on buses to access the park’s marquee attractions deep down its single 92-mile road: views of Mt. Denali (formerly Mt. McKinley), the highest peak in North America at 20,000 feet; the gleaming Wonder Lake; rolling mountainsides that contain an abundance of wildlife, including grizzly bears, moose, caribou and bighorn sheep.

About halfway along the road lies the Pretty Rocks Landslide, a slowly sliding section of earth that acts more like a glacier than a rockfall. Since the 1960s, permafrost deep below the earth’s surface has thawed, causing the soil and road on top of it—which snakes alongside a steep cliff—to develop cracks, soften and cave. For most of that time, the landslide only required minimal maintenance, says geologist Denny Capps, who joined the park’s team in 2011. “When I came, it was more of a ‘If you have time’ kind of thing. We had other more pressing issues,” he says.

But starting in the mid-2010s, the pace of the landslide started to exponentially increase. While the landslide had initially moved several inches a year, it was now moving several inches per week, causing severe dips in the road as well as other chaotic movement. Over the last two years, the department has been forced to close that stretch of road multiple times due to heavy rains, rockfall and mudslides, including an incident in August 2019 that left 300 people and 17 buses stranded for hours.

This summer has been even worse. “In the last few days, the road itself is moving at about 15 and a half inches per day,” Capps says. “When you’re coming around the corner, it just drops into a swell in the road that’s getting larger and larger. It gets so steep that the buses have literally dragged their bumpers through there.”

As a short-term fix, the Parks Service had been digging up gravel from the nearby Toklat River and dumping it by the ton onto the dipping spot in the road. But two weeks ago, as the ground continued to soften and the river’s resources began to deplete, the park’s leadership pulled the plug and instead shut down the road.

“Changing climate is driving frozen ground to thaw, resulting in unpredictable and increasing landslide movement rates at Pretty Rocks that are unprecedented in the history of the park road,” Don Striker, Denali’s Superintendent, wrote in a press release on Aug. 24. “We cannot safely keep up with the accelerating rate of landslide movement caused by permafrost thaw.”

Dozens of campers who had set up their tents deep into the park were gradually bussed out; campers who had scheduled stays in the following days at Wonder Lake were relocated to closer campgrounds, while many more cancelled altogether. Adding to the chaos at the park was a bear attack on a camper, who was mauled by a protective mother bear and treated for puncture wounds, and a snowstorm that arrived ahead of schedule, forcing the road to close for all incoming visitors.

Now, the back half of the park is closed for the winter—and without the remedial gravel hauled in, the area around the landslide will deteriorate rapidly. The situation is extremely worrying to the surrounding community, which relies heavily on Denali tourism. Given that the landslide has been accelerating every year, many are skeptical the road will be passable at all next season. “The economic impact is in double digit millions of dollars—and for a population of 2,000 people, it’s really significant,” Vanessa Jusczak, the executive director of the Denali Chamber, says. “It’s almost immeasurable what this could do to the local economy, and especially on the heels of COVID, where so many businesses are cutting services and hours. To have this incredible unknown for another season makes business owners very hesitant to invest in growth in any way.”

At Camp Denali at the end of the road, Hamm had to cancel two full weeks of bookings, amounting to 15% percent of his total operating season after a blank 2020 cancelled by the coronavirus. He is reluctantly considering a business model for a future in which all guests and resources would be flown in. “There’s a whole lot of stuff that has to get reimagined,” he says.

Looking toward an uncertain future

Help may be coming: Alaska’s House of Representatives passed a resolution last year pleading for help from the federal government for a long-term fix to combat the landslide. Alaskan Senator Lisa Murkowski has been particularly active in stumping for robust construction, and in December, she helped guide an omnibus bill through congress that included funding for a physical bridge over the landslide that may serve as a useful temporary fix, as well as a requirement for the National Park Service to propose a more lasting solution.

“We know it will be an expensive fix. But outside of seeing glaciers and hoping to see a moose or a bear, what every tourist who comes to Alaska wants to be able to see is to see Denali,” Murkowski said last year during a Senate Appropriations Committee hearing.

While Capps says that a bridge could be helpful, he and other scientists foresee problems that go far beyond this one spot in the road. Geologists have identified more than 100 other unstable areas along the road corridor. A 2014 study asserted that while 75% of the park was covered in shallow permafrost in the 1950s, that number will drop to 6% by the 2050s. And in the surrounding land around the park and across Alaska, a similar thawing is occurring, triggering all sorts of underground movement and infrastructure disruption.

“Permafrost is ice-rich, and when that thaws, it contributes water to the ground, which is one of the main contributors to landslide activity,” Capps says. “Ice literally knits the ground together, and when you take that away, it decreases the stability of the ground. That is also impacting some of our other utilities: roads, pipes, powerlines, buildings.”

Meanwhile, the effects of climate change and extreme weather are being felt all over the world: there have been landslides in Canada, exploding craters in Siberia, wildfires in western U.S. and hurricanes in the tropics. Last week, the National Forest Service closed every national forest in California due to wildfire risk while Hurricane Ida battered states ranging from Louisiana to New York.

“Alaska has always been a difficult place to live and do business, but we’ve managed to do that thus far,” Capps says. “Nonetheless, I think we need to kind of take this as a lesson for what can happen. This is a microcosm for some of the bigger questions we’re having to ask ourselves around the globe these days.” 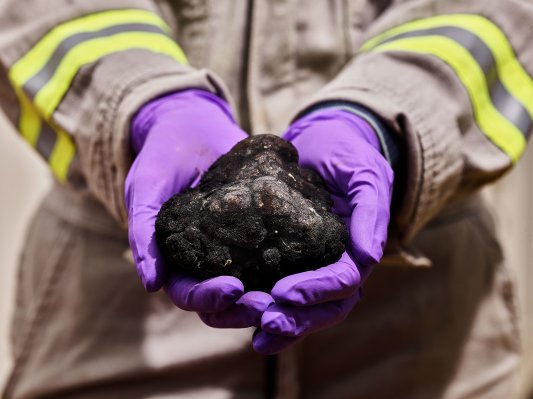 Seabed Mining May Solve Our Energy Crisis
Next Up: Editor's Pick