Everyone Procrastinates. Here's How to Accomplish What Matters Most to You

There is simply too much to do everyday. Learning how to procrastinate better is vital.
Getty Images
Ideas
By Oliver Burkeman
Burkeman is the author of Four Thousand Weeks: Time Management For Mortals

There must be few opinions more widely held, when it comes to the art of time management, than that procrastination is always and exclusively a bad thing. Naturally, history’s annoyingly over-productive types—the Benjamin Franklins of the world—have always disdained the tendency to procrastinate. But then so have most procrastinators themselves. The inner struggle to eradicate the trait has driven many a celebrated genius to desperate measures, as when Victor Hugo had his clothes locked away, so that he couldn’t wander the streets of Paris, and instead was obliged to keep writing The Hunchback of Notre Dame in a state of near-nudity.

But there’s another way to think about procrastination—one that’s arguably more relevant than ever today when it comes to the challenge of managing our daily time. We live in a world of “infinite inputs”: there’s no meaningful limit to the number of emails you could receive or demands your boss could make; nor, for that matter, to the number of creative projects, business ventures or exotic vacations you might wish to pursue. And in this situation there’s a sense in which procrastination isn’t so much a bad thing as an unavoidable one. At any given moment, you’ll be procrastinating on almost everything; and by the end of your life, you’ll have gotten around to doing only a fraction of the things you hypothetically could have done.

So the goal, in the words of the contemporary American spiritual author Gregg Krech, isn’t to eradicate procrastination, but to become a better procrastinator, making the best choices about what projects and tasks to allow to languish, so as to free up time, energy and attention for what matters the most.

Traditional time management has long held out the implicit promise of “getting on top of everything”, of becoming the master of one’s time. The yearning for this feeling of control over the unfolding hours and days is an old one: back in 1908, in a short book entitled How to Live on 24 Hours a Day, the English journalist and novelist Arnold Bennett offered scheduling tips to “that innumerable band of souls who are haunted, more or less painfully, by the feeling that the years slip by, and slip by, and slip by, and they have not yet been able to get their lives into proper working order.”

Back then, it was still possible to believe that with the right methods and enough self-discipline, getting on top of it all might be feasible. But no more. The pace of technological change, and ratcheting economic competition, mean it’s worth our asking if it might be time to give up the fight—to wave goodbye to the prospect of ever mastering our time, precisely so that we can focus on actually getting down to work on a handful of things that really count.

One problem is that the technologies we use to try to make our lives more efficient or fulfilling systematically fail us, because they increase the size of the “everything” on which we’re trying to get on top. For example, Facebook is a great way of finding out about events you might like to attend—but it also inevitably means finding out about more interesting events than anyone ever possibly could attend, leading to the modern curse of FOMO (the fear of missing out) which diminishes the pleasure of attending any one event thanks to the vague worry that you might have been happier doing something else. Similarly, email is a pretty good tool for handling a large volume of messages – but then again, if it weren’t for email, you wouldn’t be receiving such a large volume of messages in the first place.

“Becoming a better procrastinator” needn’t mean eschewing such tools entirely. But it does mean dropping the inner quest to do it all, in favor of making better and more conscious choices about what to pursue or pass up.

One way to do this, as the creativity coach Jessica Abel explains, is to “pay yourself first” when it comes to time. It’s an old piece of wisdom, originating in personal finance: far better to put some money aside into savings as soon as you’re paid, rather than hoping there’ll be some left over once you’ve handled the costs of living. Likewise, if you try to find time for your most valuable activities by first dealing with all the other important-seeming demands you face—the emails and unpaid bills, the dishwasher that needs emptying—in the hope that there’ll be time left over at the end, you’re likely to be disappointed. So if a certain project really matters to you, the only way to be sure it will happen is to do some of it now, first, today, no matter how little, and no matter how many other things may be making entirely legitimate claims in your attention.

This is the same insight embodied in two venerable pieces of advice: to work on your most important project for the first hour of each day; and to protect your time by scheduling “meetings” with yourself, marking them in your calendar so that other commitments can’t intrude. Thinking in terms of “paying yourself first” transforms these one-off tips into a philosophy of life, at the core of which lies a simple insight: that if you plan to spend some of your approximately four thousand weeks on the planet doing what matters most to you, then at some point you’ve just got to start doing it.

In the end, though, learning to procrastinate better is less a matter of tips or techniques than a shift of perspective. It means coming to appreciate that not doing almost everything is an inevitability, and that the uncomfortable emotions triggered by such thoughts are just a matter of confronting what it means to be human. Because our time on earth is so limited, it’s absurd to try to spend it doing everything you’d dreamed of, or all you feel obliged to do. Just make it your goal to get better at deciding what to neglect. 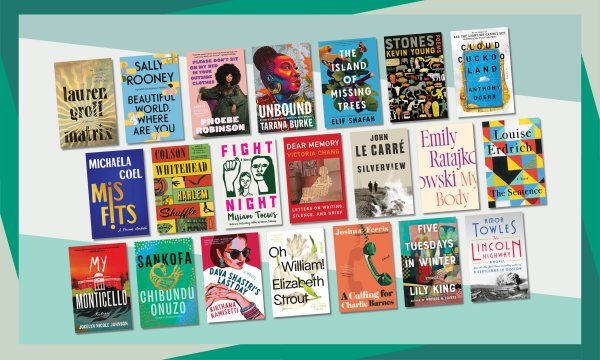 The 34 Most Anticipated Books of Fall 2021
Next Up: Editor's Pick