Impeachment: American Crime Story Frames the Clinton Scandal as a Case of Women Sabotaging Women. Is That Really So Revolutionary?

The latest installment of Ryan Murphy’s FX anthology American Crime Story is not exactly well timed. Impeachment, which revisits the investigation that threatened to end Bill Clinton’s presidency, was originally intended for release before the 2020 election. Instead, it premieres on Sept. 7—months after the twice-impeached Donald Trump left office, taking the immediacy of the title with him. The season is based on a nonfiction book whose author recently faced his own extremely public sex scandal. And it follows years’ worth of high-profile reconsiderations of the Clinton impeachment, from Monica Lewinsky’s reclamation of her good name in a 2014 Vanity Fair essay to A&E docuseries The Clinton Affair and a buzzy season of the podcast Slow Burn, both tied to the 20th anniversary of the story in 2018. There may always be an appetite for content around this salacious tale of sex, politics and media, but what is there to say about it that hasn’t been said before?

That is the question with which Impeachment struggles as it reassembles all the familiar elements: the blue dress, the Drudge Report, “I did not have sexual relations with that woman, Miss Lewinsky.” Head writer and executive producer Sarah Burgess, an award-winning playwright who is relatively new to TV, finds her answer in the women this scandal thrust into the spotlight—not just Monica, Hillary and Linda Tripp, but also Paula Jones, Ann Coulter and more obscure players including Jones adviser Susan Carpenter-McMillan and Tripp’s literary agent, Lucianne Goldberg. A handful of interesting performances and effective episodes in the second half of the season aside, the effect is to reduce the President and his inquisitor, Ken Starr, to minor roles. If there’s a point to this exercise, it gets lost amid so many histrionic reenactments of scenes we’ve seen replayed on the news and parodied in late-night comedy for more than two decades.

Of course, for Murphy-verse diehards, stunt-cast actors hamming it up in broad roles are part of the appeal. And in that regard, Impeachment gleefully delivers. Our heroine, in a choice that might have seemed subversive before Lewinsky’s reemergence but now just feels obvious, is the lovelorn, early-20s Monica, given sympathetic voice by the preternaturally effervescent Beanie Feldstein. Murphy regular Sarah Paulson takes on the guise of Monica’s treacherous coworker and confidant, Linda. While she isn’t exactly bad in the role, this is not a transformation on the level of her gloriously angry Marcia Clark in The People v. O.J. Simpson. Tripp remains the same delusional, cartoonish character she has always been.

Paulson isn’t the only cast member rendered fully unrecognizable by makeup, prosthetics and/or wigs. Clive Owen’s transformation into Bill Clinton must have taken hours, although it still doesn’t leave him looking much like the former POTUS. (Perhaps because she barely appears until the seventh episode, the production doesn’t appear to have expended much energy on sculpting the egregiously miscast Edie Falco into a believable facsimile of Hillary.) Owen does, at least, break from the standard, overly broad “Bubba” impression. His Bill isn’t a fratty hedonist so much as a man too psychologically compartmentalized to face his own misdeeds. There’s a regretful mutedness to the performance, too, as though we were watching the Clinton of 2021 retrace steps he took as a younger, more energetic and libidinous man.

Although the cast of characters is enormous, encompassing everyone from Clinton’s advisers to members of Starr’s team to the swarm of beltway reporters and pundits buzzing around the developing story, it’s the relationship between Monica and Linda that gives the season its shape. After opening with a thriller-esque flash-forward to the stranger-than-fiction sting operation in which Linda and a band of FBI agents ambush Monica at the Pentagon City Mall food court, the show traces the women’s time together at the Department of Defense. A pair of White House exiles, one nursing a secret love affair and the other a secret grudge, they bond over their impatience to leave the Pentagon’s boring, gray cubicles for another stint in the West Wing. When Linda realizes that Monica’s encounters with the President could give her the leverage to become the genuine Washington player she’s so desperate to become, the friendship becomes a seduction.

As Bill pulls away from Monica and Linda’s deceptions escalate to the point of taping the girlfriends’ marathon phone calls—and also, confusingly, as the show skips around among dates in the mid-to-late ‘90s—peripheral stories begin to unfold. There’s palace intrigue in the Oval, with aides scrambling to protect a President who seems only dimly aware of what he’s done, and cognitive dissonance at Starr HQ, where investigators’ conservative sympathies wrestle with a need to maintain the appearance of nonpartisanship. We watch Paula (a camped-up, makeup-caked Annaleigh Ashford) get unwittingly dragged into her husband’s (Taran Killam) and self-proclaimed “conservative feminist” Susan’s (the great Judith Light, splitting the difference between Phyllis Schlafly and Laura Dern in Marriage Story) vendetta against the Clintons.

The strongest side plot, by far, follows the media circus surrounding the Starr investigation. In one corner there’s Newsweek reporter Michael Isikoff (Danny A. Jacobs) doing his shoe-leather thing—vetting sources, refusing access to illegally recorded audio and still having to beg his skittish editors to just publish the Monica story already. In the other, more sinister but also more colorful corner are Coulter (Cobie Smulders), Matt Drudge (Billy Eichner) and their circle of oddball right-wing upstarts, who want to engineer the President’s downfall and get rich and famous snarking about it, too.

If any aspect of the Clinton impeachment merits closer examination in 2021, it is surely the role it played in creating a flamboyantly partisan far-right media sphere, with echoes reverberating from Fox News to Breitbart to OANN. (Curiously, Showtime’s 2019 Roger Ailes docudrama The Loudest Voice skipped over this fertile period.) A vignette that finds the self-mythologizing Drudge managing the CBS studio’s gift shop by day—yes, he’s that guy spouting hot takes on Edward R. Murrow to apathetic customers—and diving into its dumpster at night in search of scoops brings some much-needed fun to a season that spends too long on inert recreations of Linda and Monica’s phone calls. It helps that Eichner and Smulders are so good. Her performance merits particular notice, considering that she stepped in on short notice to replace Betty Gilpin; she nails the character’s icy glare, her deadpan baritone, her surprisingly jockish body language.

Burgess paints Coulter as a sort of arrogant, nihilistic Peter Pan to a gaggle of awkward, conservative Lost Boys. (“Nice hat,” she quips upon meeting Drudge. “Is it serious?”) Though I wish we saw more of this cohort, that framing works. Elsewhere, we see other women quietly cranking the levers of power. The relationship between Paula and Susan mirrors that of Monica and Linda; in both cases, a commanding older woman pretends to nurture a lonely, naive, wronged young woman while actually using her pain to selfish ends. At the same time, Linda’s doing dirty work for Lucianne (Margo Martindale in tough-broad mode, always a treat), the agent she’s desperate to impress. Women wield influence in the White House as well. Bill’s personal secretary Betty Currie (Rae Dawn Chong) gradually shifts from compassionate Monica enabler to stern gatekeeper. When the prospect of settling Paula’s lawsuit comes up, Bill nixes the idea for fear of crossing Hillary.

All history written after the official record is set must be revisionist, redundant or some combination of the two, and revisionist history loves to restore agency to oppressed groups whose contributions went unheralded in the original accounting. It’s usually a noble project. But in this case, it’s hard to see what is gained by putting some of the most powerful men in the world on the sidelines. It lets Clinton, Starr and the patriarchy at large off the hook.

The depictions of the women, for their part, rarely challenge the tabloid caricatures of 1998. When Susan calls Paula “dumb as a rock,” there’s nothing in the script to contradict that impression. Impeachment seems to delight in mocking Linda, whose passion for microwave cuisine comes off as almost sexual. The real women behind these characters may well deserve such scrutiny. But it’s a weird political stance for an anthology that, in past seasons, connected the murder of Gianni Versace to a culture of homophobia and teased out all the ways in which race, class, gender and the cult of celebrity intersected with the O.J. Simpson trial. And by reproducing old stereotypes, a story presumably meant to be revisionist slips into redundancy.

The only character Impeachment really seems interested in humanizing is Monica, which isn’t so surprising given that Lewinsky, now 48 and an anti-bullying advocate, is one of its executive producers. Casting the bubbly, adorable Feldstein opposite the prosthetically monstrosified Paulson and Owen is like casting a guileless little bunny as the final girl in a creature feature. On screen as in reality, Lewinsky is a relatable protagonist—a moony, insecure post-adolescent whose devastatingly charismatic, terminally unavailable paramour just so happens to be the leader of the free world. What the show doesn’t seem to get is how successful Monica Lewinsky has already been, over the past seven years, in shifting the narrative around Monica Lewinsky from slut-shaming to sympathy.

More unfortunate still is the way this emphasis repeats the mistakes of the ’90s media, by portraying the impeachment circus as a melodrama fit for the National Enquirer rather than as, for instance, a vast right-wing conspiracy to torpedo a Democratic presidency—one that laid the groundwork for our country’s current partisan nightmare. No one could blame Lewinsky for viewing her own ordeal as the most salient topic for Impeachment to tackle. The rest of the American Crime Story team should have known better. 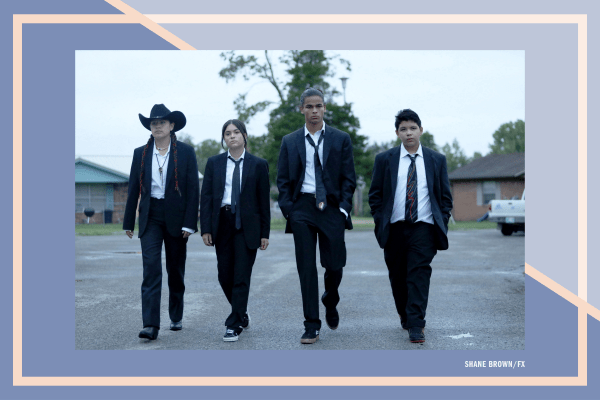 Best New TV Shows Our Critic Watched in August 2021
Next Up: Editor's Pick