'I Just Don't Feel Like I Need It Yet.' Why the NYPD Is Grappling With COVID-19 Vaccine Hesitancy

The New York City Police Department (NYPD) is struggling to vaccinate its employees. According to the department, an estimated 47% of its members are fully vaccinated under NYPD-administered programs against COVID-19 as of Aug. 24.

Even accounting for a percentage of the NYPD’s force who may have been vaccinated outside work and not provided details thereof—the NYPD is not mandating that its employees self-report their status—that figure likely represents a sizable decrease from the wider vaccination rates across New York City: 76% of all adult city residents have gotten at least one shot as of Aug. 26 and 68% are fully vaccinated. And amid the Delta variant impacting non-vaccinated New Yorkers, the COVID-19 positivity rate in NYC over the last seven days is around 3%.

On July 26, NYC Mayor Bill de Blasio said that all city workers would be required to get vaccinated or get tested weekly from Sept. 13 onwards. And on Aug. 23, the Pfizer-BioNTech vaccine became the first COVID-19 vaccine to be approved by the U.S. Food and Drug Administration (FDA).

But one Brooklyn-based traffic enforcement agent tells TIME they have no immediate intentions of getting the vaccine: “I just don’t feel like I need it yet. I spend most of my time outside and I wear a mask,” the traffic officer says. “For me, it’s about having the choice to take it—and I just don’t want to take it yet.”

(A spokesperson for the New York City Patrol Benevolent Association (PBA), the largest police union in New York City, told TIME on Aug. 25 that they would take “legal action” if there is a vaccine mandate for its workers.)

TIME has granted the two sources anonymity to allow them to speak openly on the subject of vaccinations due to their concerns of potential reprisals at work.

Both NYPD members say they feel like most of their colleagues take enough precautions; they are aware of working alongside both people who are vaccinated and who aren’t.

“We continue to make vaccinations available at multiple times and at multiple locations to ensure that as many of our employees as possible get the vaccination,” the NYPD said in a statement sent to TIME on Aug. 24.

This issue isn’t unique to New York. Many cities across the country have seen low vaccination numbers amongst their police departments. The Los Angeles Police Department (LAPD) reported on Aug. 16 that they also have a vaccination rate of around 47%, for example, while the Los Angeles County Sheriff’s Department reported that less than 30% of their deputies have been vaccinated.

A 2020 study from the National Law Enforcement Officers Memorial Fund found that, of all the officer deaths recorded across the U.S. in 2020, nearly half were the result of COVID-19. On Aug. 23, Houston Police Department Chief Art Acevedo tweeted that he had signed, “10 more condolence letters for active-duty officers who have been taken from their families, friends, and colleagues by #COVID19. We are lifting them all in prayer,” though it was not clear during what timeframe the officers had died.

“When you look at who is getting sick right now, every story I hear anecdotally, it’s somebody that is not vaccinated,” NYPD Commissioner Dermot Shea said in a July 27 interview with local news channel NY1 calling for NYPD officers to take COVID-19 vaccines. “God forbid, you put yourself or your loved ones or anyone else at risk. It’s the right thing to do.”

Read more: Can Employer Mandates Get More Americans Vaccinated? New York and California Are Finding Out

The traffic cop says the deaths are heartbreaking, but they still aren’t ready to get vaccinated.

“I just want to wait a little longer. I follow all the other health [protocols] but before I get a shot I want to know it’s the right thing for my body,” they say. “Getting the vaccine is a decision I should make. Not my job.”

On Aug. 11, California became the first state to require all teachers and school staff to get vaccinated or get weekly testing. In Chicago, Mayor Lori Lightfoot confirmed a vaccine mandate on Aug. 25 for all city workers, an announcement which the head of the city’s Fraternal Order of Police later likened to the Nazi regime.

Unions have pushed back forcefully against these steps. In addition to the PBA’s apparent plans for litigation as disclosed to TIME, leaders representing over 300,000 city workers are planning to file a lawsuit against de Blasio for his vaccine mandate, specifically for public school staff.

Both the traffic cop and the 911 operator say that, if it comes down to them losing their job, then they would get their shots.

“If it’s between my job and the vaccine then I would get it. I would try to fight it but, eventually, I would get it,” the 911 operator says. 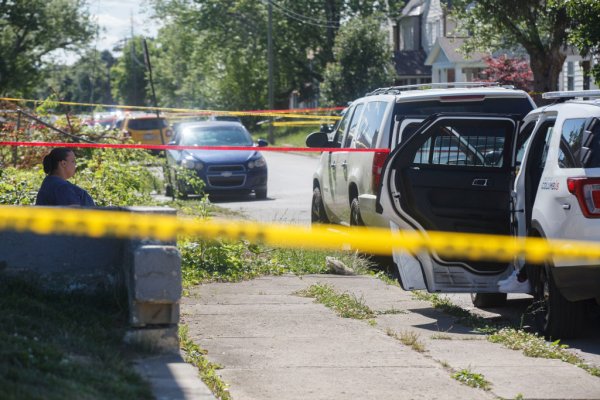