House Democrats Are Fighting Among Themselves on How to Pass Infrastructure

Legislative standoffs are nothing new at the Capitol. But the scope and scale of the current stalemate among Democrats is as dramatic as it is head-scratching.

The House is coming back to Washington this week, cutting short its typical August recess, to start its work on twin proposals that would spend more than $4 trillion on measures including upgrading roads, funding new programs for childhood education and providing a pathway to citizenship for as many as 8 million new Americans. It’s a massive lift, and it is moving on a two-track path: there is broad bipartisan support for about $550 billion in new spending on things like roads, bridges and Internet connectivity, and fragile backing among only Democrats for about another $3.5 trillion in so-called “soft infrastructure.” But the way the one-two punch has been structured leaves each jab at the risk of missing its mark.

A contentious rift between the moderate and liberal wings of the Democratic Party could complicate matters, despite House Speaker Nancy Pelosi’s insistence that there be “unanimity” inside her caucus. Centrists are pushing for the House to immediately pick up the bipartisan piece while negotiators work out the details of the bigger-ticket package that cleared the Senate with the understanding the details would come together later. Progressives, meanwhile, say they’ll give their votes for the bipartisan effort only when the ink on their agenda for the other $3.5 trillion is dry.

What has emerged is essentially a double-hostage situation. Democrats at the moment have an eight-seat advantage in the House, meaning they can afford only three defections. (Because there are three vacancies, the typically 435-member House could result in a tie, for which there is no provision to break. Four defections yield a tied vote, which results in failed legislation.) Both the middle and the left can derail the other camp’s agenda if they don’t get their way and both sides say their threat is more than rhetoric. Which is basically a nice way of saying the Democrats are playing a game of chicken with themselves.

Pelosi, of course, is a master of her caucus. She understands how to quell an uprising when she needs to. She spent the weekend on the phone with members and the White House trying to figure out a way forward on both pieces. Even more than Minority Leader Mitch McConnell on the other side of the Capitol, there is no one in Washington with more of a grip on a party than Pelosi. She has guided her fellow Democrats through far choppier waters with tighter deadlines than a movable target of September. The White House, meanwhile, is placing its faith in her to solve this as President Joe Biden is distracted by other crises.

Still, the roil is something of a shock. There’s not an obvious way out of this jam for Democrats, who are ostensibly in control of Washington for at least another year. Pelosi allies and detractors alike expect that she’ll find a way to get both sides to an agreement, even if it’s an acrimonious one. After all, the Democrats cut short their time at state fairs, ice cream socials and corn roasts to return to a thoroughly unpleasant, humid city that most flee in August. For them to return to Washington’s summer stew without the promise of a victory seems unlikely. But so is a scenario by which Democrats—all seemingly in the mood to give Biden a much-needed victory amid a hurricane, war and pandemic—implode. Given everything else on the party’s plate, internal squabbling should seem like an easy fix. 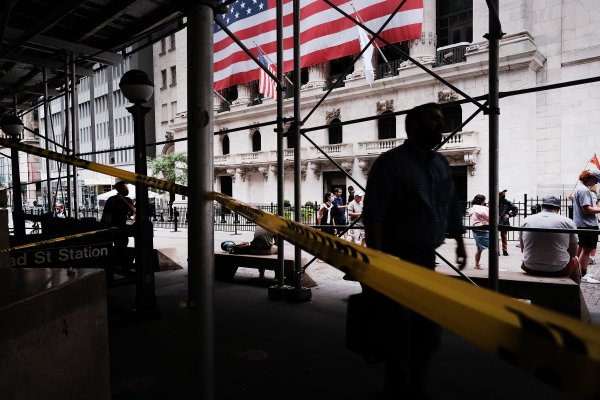 Why Legacy Wealth Is an Easy Target to Fund Infrastructure
Next Up: Editor's Pick