Why Legacy Wealth Is an Easy Target to Fund Infrastructure

The United States is a nation of deep inequalities. Race, gender and sexuality are the obvious spaces that reveal those unlevel playing fields. But there’s another arena where the gaps aren’t immediately as obvious—but they’re increasingly important.

As lawmakers look for ways to pay for their massive U.S. infrastructure package, taking a chunk from legacy wealth may prove a piece of the solution. Under the plan advanced through the Senate with solely Democratic votes to spend $3.5 trillion on soft infrastructure, part of the tab will be picked up by asset-based income from rents, bond sales and dividends. In other words, the rich are going to be asked to pony up in places that—if we’re being honest—probably aren’t as dilapidated as poor, rural American communities. For years, there have been donor states and client states; now, the maker-and-taker model may apply to even ZIP codes within a county.

According to a new analysis from Silicon Valley entrepreneurs’ favorite think tank, the Economic Innovation Group, income from existing wealth is in the hands of a relatively small group and concentrated in disturbingly homogenous communities. The division of rich and poor—both in terms of people and places—has gotten more pronounced in the last 60 years despite Great Society programs, agendas for economic and education opportunity and social safety nets. In short, institutional wealth is probably here to stay, the middle class hasn’t gotten its fair shake and the location of the post-office box where you drop your taxes on April 15 probably matters more than you realize.

“So few places have participated in the boom in asset- and wealth-income that the country has experienced over the past couple of decades. Holding assets in the United States is a privilege to an extent that I don’t think I initially realized,” EIG’s research chief Kenan Fikri told me by phone yesterday. “Relatively few Americans own any meaningful assets” outside of homes or retirement accounts, he added.

One-fifth of all personal income in the United States comes from individuals’ existing wealth. In an economy that generated a mind-blowing $22 trillion in the first three months of this year alone, according to government data, that’s roughly $4.4 trillion from existing wealth during the same period. And while, yes, it takes effort to manage properties and investments, no one is arguing that’s the same as making widgets and moving them to market. In the often-misconstrued words of Barack Obama in 2012, “You didn’t build that.”

The pace of break-away wealth has hastened in the last six decades. The top and the bottom counties in the country saw the gap between them double between 1969 and 1990, but the same measure grew six-fold between 1990 and 2019. In other words, the chasm between the places with legacy wealth—including a growing middle class investing in their retirements or homes—is widening compared to the vast majority of places where residents are just trying to get by.

The numbers also illuminate the urban-rural divide in America. The top 20% of counties with the biggest asset-based incomes are home to 80% of the population. Those dense urban counties accounted for almost 88% of the asset income in 2019, slightly ahead of where you’d expect them to be. Compare that to the bottom 50% of counties, where roughly 6% of the population lives; those counties accounted for a little more than 3% of the asset income in this country. Put bluntly: they’re not posting the same level of investment.

And the factor of race is impossible to ignore. Consider Cleveland. In its least-diverse ZIP code, which includes Chagrin Falls, the average resident earned $15,800 in 2019 in asset-based income. Its most diverse ZIP code, which includes the Kinsman Road neighborhood, reported a corresponding $1 in such income for the average resident in the same year.

So why is this Washington’s problem? You see it in polls and at the ballot boxes. Voters aren’t wrong when they say they’re being left behind. There’s a reason populism has enjoyed a moment for the last decade or so. The Occupy Wall Street movement and the Tea Party both were striking the same nerve when they claimed that power was clustered in the hands of too few individuals who were indifferent to complaints about profligate spending and an emerging American oligarchy. Donald Trump tapped this energy to defeat more than a dozen more traditional contenders for the 2016 Republican nomination, and Bernie Sanders and Elizabeth Warren got close to winning the Democratic nod harnessing the same anger. The EIG study, based on IRS and Bureau of Economic Analysis data, shows those grievances aren’t unfounded.

But Washington is playing a potentially dangerous game as it considers the upcoming infrastructure spending bill.

Currently, the top tax rate for asset-based income is 20%, lower than the top corporate rate of 21% and the 37% rate for top individual earners. Biden has simplified the argument to income is income and, as part of the infrastructure plan, wants to boost the asset-income rate—aka capital-gains taxes—to 39.6% or, per the White House budget outline, as much as 43.4 percent.

If you’re a trust-funder, landlord or day trader, you’re probably freaking out. The plan—still coming together in the House after the Senate’s initial approval—would basically fund infrastructure on the backs of the folks who can afford both financial planners and follow up with extra money into investments. In a progressive-tax regime, this is how things go.

On a policy level, the decision to impose this level of taxation could lead to investment in neglected communities. But it could also put a deadly choke on new capital investment. If you’re going to see Uncle Sam take 40 cents on the dollar for the money you make in an investment, it’s a less appealing risk to take. If you’re a small business or even a big bank, the entire enterprise rests on investors’ willingness to take a chance with the potential of an economic gain.

But Washington has shown, time and again, that policy comes second to politics. A huge tax hike on the rich heading into an already-shaky election year could energize the progressive base that wants to rile up the people who could cut big checks to anti-tax super PACs. Alternatively, the plan would essentially tax enclaves of the rich to pay for sparsely populated areas, a fact that could be seen as an “urban tax” that could depress the Democratic coalition that typically doesn’t turn out as much in non-presidential years.

No one debates that a $3.5 trillion infrastructure bill would look great in the Biden Presidential Library when it’s built someday. But that exhibit could be across the hall from one about a Biden-era economic skid unseen since 2008 if Wall Street goes dry and voters cast him aside after one term like George H.W. Bush, who hiked taxes on the rich. Even if the split-screen works for Biden, it also requires his supporters to forget this inconvenient fact: he campaigned hard for the (mostly) successful economic recovery packages in 2009 and 2010 that helped Americans dig out of the biggest economic rut since the Great Depression. In those provisions, even top earners claimed significant tax cuts. 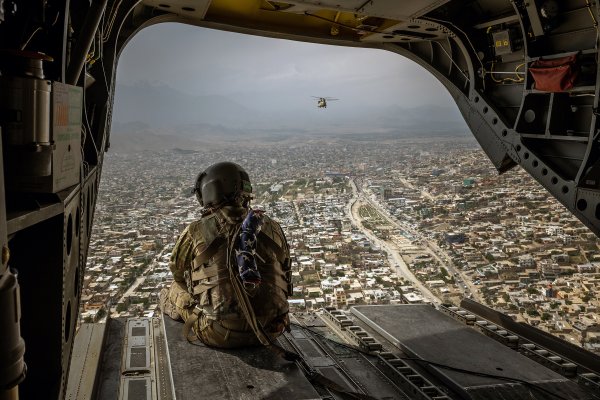 A Political Scientist on Why the U.S. Lost in Afghanistan
Next Up: Editor's Pick