New Jeopardy! Host Mike Richards Steps Down Amid Criticism. But He's Not Leaving the Show Entirely

Jeopardy! executive producer Mike Richards has officially stepped down as incoming host of the long-running game show as multiple controversies from his past have come to light.

After emerging earlier this month as the frontrunner to take over as Jeopardy!‘s new permanent host, Richards came under fire this week for offensive and sexist comments he made on a podcast several years ago. Additionally, discrimination allegations Richards faced while he served as co-executive producer and executive producer of The Price is Right—a job he held from 2008 to 2019 before moving to Jeopardy! in 2020—resurfaced in recent weeks.

Richards announced his exit in an internal staff memo on Friday, stating that it had become “clear that moving forward as host would be too much of a distraction for our fans and not the right move for the show.”

According to a subsequent statement from Sony Pictures Television, the studio that produces and distributes Jeopardy!, Richards will stay on as executive producer as the program continues its search for a full-time replacement for late host Alex Trebek, who served as the beloved face of the game show for 36 years before he passed away in November 2020.

“Mike has been with us for the last two years and has led the Jeopardy! team through the most challenging time the show has ever experienced,” the statement read. “It is our hope that as executive producer he will continue to do so with professionalism and respect.”

Here’s what to know about the controversy surrounding Richards and what’s next for Jeopardy!

Criticism grows over Mike Richards being selected as the Jeopardy! host

After serving a two-week stint as one of Jeopardy!‘s rotating guest hosts earlier this year, Sony announced on Aug. 11 that Richards would become the show’s new regular host while former Big Bang Theory star Mayim Bialik would take over as host for prime time specials and spinoffs.

The decision was largely met with criticism, as many fans were hopeful that other popular guest hosts, like former Reading Rainbow host LeVar Burton or Jeopardy! champion Ken Jennings, would be chosen for the gig rather than the executive producer who was originally tasked with leading the search. Backlash over allegations of discrimination that Richards faced during his tenure at The Price is Right also continued to mount, having first flared up when Richards emerged as the Jeopardy! host frontrunner earlier this month.

While working at The Price Is Right, Richards was implicated in multiple employment lawsuits filed by former models on the show, including a 2010 complaint in which model Brandi Cochran alleged that Richards and other producers discriminated against her due to her pregnancy. Cochran won the suit in 2012 and was awarded $8.5 million in damages. However, the decision was overturned the next year and the case was eventually settled out of court.

Richards addressed the allegations in an Aug. 9 memo to Jeopardy! staff, claiming that the characterization of his comments and actions don’t reflect the reality of who he is. “I would not say anything to disrespect anyone’s pregnancy and have always supported my colleagues on their parenting journeys,” he said.

The controversy came to a head on Wednesday, when The Ringer published a report detailing offensive comments Richards made while hosting The Randumb Show podcast from 2013 to 2014. In a series of audio clips obtained by The Ringer before all 41 episodes of the podcast were pulled from the show’s hosting site on Tuesday, Richards can reportedly be heard making disparaging remarks about women, Asians, Haitians and Jews, and using derogatory terms for both little people and people with mental disabilities.

In one instance, Richards refers to his co-host and former assistant Beth Triffon as a “booth ho” and “booth slut” while discussing her work as a model at CES. In another, he says that Triffon’s female friends “look really frumpy and overweight” after seeing a picture of them in swimsuits.

The report prompted the The Anti-Defamation League to call for an investigation into Richards’ behavior ahead of his Friday departure.

“New Jeopardy! host Mike Richards’ disparaging remarks about Jews, women & Asians are no laughing matter,” the organization wrote on Twitter on Thursday. “Stereotyping is an entry point to hate and his apology lacks acknowledgment of its harm. This reported pattern warrants an investigation.”

What’s next for Jeopardy!?

With Richards out, Jeopardy!’s search for a permanent host to join Bialik will resume once more. In the meantime, Richards said in his Aug. 20 memo that the show will be bringing back guest hosts to continue production for the new season. Sony announced on Aug. 23 that Bialik will serve as the first guest host and fill in for three weeks of episodes. Future guest hosts will be announced at a later date.

“I want to apologize to each of you for the unwanted negative attention that has come to Jeopardy over the last few weeks and for the confusion and delays this is now causing,” Richards concluded his statement. “I know I have a lot of work to do to regain your trust and confidence.” 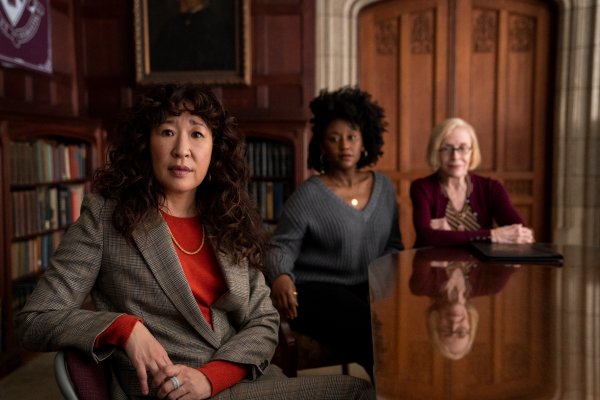 Netflix’s Sharp Satire The Chair Throws Sandra Oh Into the Politicized Powder Keg of Higher Ed
Next Up: Editor's Pick