Ahead of the 20th anniversary of 9/11, a new documentary chronicles the controversy around the creation of the National September 11 Memorial and Museum and goes behind the scenes to explore the purpose of the site, which opened in 2014. The Outsider, which premieres Aug. 19 as the first paid ticketed film event on Facebook, probes whether the museum treats Muslims and 9/11 victims’ families with sensitivity and questions if the site does enough to capture the way the attacks changed the U.S.

The film, directed by Steven Rosenbaum and Pamela Yoder, follows museum staff as they make key decisions about what to include in the exhibits. Their access began early; the duo had filmed 500 hours of footage in the immediate aftermath of 9/11 and chose to donate that work to the museum’s archive in exchange for permission to chronicle its creation.

Compiled from hundreds of hours of footage filmed primarily between 2008 and 2014, The Outsider tracks the museum’s original creative director, Michael Shulan (the titular “outsider”), as he is initially optimistic about the project’s aims but becomes dispirited by the end results. Viewers follow Shulan, who left the institution shortly after it opened, as he starts to believe the site feels more like a New York City tourist attraction akin to Times Square than a museum offering a nuanced portrayal of history.

The museum is home to hundreds of artifacts that bring visitors right to the scene of 9/11: everything from fire trucks and ambulances to worn-out shoes, helmets and one of the steel columns that once supported the inner core of the South Tower. It includes exhibits on the events that occurred on 9/11, the hunt for Osama Bin Laden and an in-memoriam section that features a floor-to-ceiling presentation of more than 2,900 portrait photographs of victims.

Although upwards of 3 million people visit the museum each year—and many find it to be a powerful experience, the documentary scrutinizes the very purpose of the site—and the message sent not only by what it includes, but also by what it doesn’t. In an interview for the film, Philip Kennicott, the Washington Post’s chief art and architecture critic, considers what the museum could have featured. “Overwhelmingly, the message of the museum wasn’t educational as much as it was about grievance. In a sense, its fundamental message was: how could they have done this to us?” he says. “There’s been little discussion of how 9/11 actually changed America, how we’re all under surveillance. Our phones tapped, our emails collected. We learned nothing about the overwhelming cost of two wars, the loss of civil liberties… the systematic use of torture in prison camps.”

The National September 11 Memorial and Museum has spoken out against the film and asked for multiple scenes to be cut. Museum spokesperson Lee Cochran gave a statement to TIME and other outlets that the film “looks at the museum through a very specific ideological lens which we do not share.” “At a moment when so many institutions in the U.S. are subject to ideological and partisan divisions, the Memorial and Museum must remain a sacred space that seeks to educate and unify,” Cochran says.

Fort Pitt ladder truck in storage at Hanger 17, the former Tower Air Hanger, which is now a storage facility for the National 9/11 Museum.
Steven Rosenbaum

The Outsider follows debate over the museum’s treatment of Muslims

Criticism of the National September 11 Memorial and Museum began with the site’s inception. A chief objection was over how the museum depicted Islam, including accusations that it failed to do enough to distinguish al-Qaeda from the majority of the world’s Muslims.

In one scene in The Outsider, museum staff decide to describe the rise of al-Qaeda using the terms “Islamism,” “Islamic law” and “Jihadism” in an explanatory film at the permanent exhibit. In 2014, dozens of scholars, including professors at Harvard University, Georgetown University and Columbia University, signed a letter to museum leadership raising concerns about the explanatory film. “These terms could easily mislead and assign collective responsibility to Muslims and Islam,” the letter stated. (The museum has kept the film as is.)

“The way they treated that language in that editorial meeting was just so casual,” Rosenbaum says. “You’re dealing with a subject that has the potential to really divide people.” (Cochran says that museum officials feel the documentary creators took comments out of context to show people speaking in a more callous way.)

Museum staff say they have gone to great lengths to distinguish between al-Qaeda and the majority of Muslims, noting a line in the text on display with the explanatory video that states “al-Qaeda represents a tiny fraction of the global Muslim community.” They state that they have directly addressed Islamophobia in their programming, including in a 2017 discussion about grappling with Muslim-American identity in post-9/11 America and lesson plans that elaborate on the talk and topic more broadly, as well as photos in a section called “America in Shock.” One image shows a Yemen-born American, who appears to be a victim of a hate crime, after 21 shots were fired at his gas station. Another photo shows a banner displayed in New York City in September 2001 that reads: “Please don’t hurt our Muslim neighbors.”

Despite these actions, criticism of the museum persists even years after the site opened. In a recently published call to “reform the September 11 Museum,” Asad Dandia, a Brooklyn-based Muslim writer and organizer, writes that “there is a real danger that visitors stop at the word Islam and assign collective responsibility.” The average American may not be able to parse the nuanced differences between Islamism, jihadism and Islamic law when they hear these references in the museum, Dandia tells TIME. “So where do they direct their anger? Often at Muslims,” he says. “Acknowledging Muslims in the museum would actually help the museum more than hurt it. That’s how we can heal.”

Some family members of 9/11 victims have also criticized the museum, calling out the site for its lack of sensitivity—particularly when it comes to the gift shop, which has sold everything from stuffed animals to commemorative flags bearing the victim’s names. The gift shop continues to operate today; museum staff say the shop sells items similar to those available at other memorial sites and that the revenue benefits the museum and its educational programs.

The film’s narration characterizes some families as being “appalled that memories of their loved ones are being monetized into tacky branded keepsakes.” It shows a news clip of an interview with Jim Riches, the father of a firefighter who died on 9/11. “They’re basically making money off my son’s dead body. That’s disgusting,” Riches says.

To make a site that truly honors victims and their families and reflects the U.S., Rosenbaum says, would involve listening to critics and changing the structure of the organization. “When you look at the Board of Trustees of the museum, it’s very white and very male. If it’s a national museum, it should look like America. It should have more women and more people of color and more religions,” he says. Cochran says the organization is working to diversify its board and is proud of its progress so far, having recently added three new members.

Jan Seidler Ramirez, chief curator of the National 9/11 Museum, reviews an artifact of the remains of an airplane window in 2013.
Steven Rosenbaum

Cochran, the museum spokesperson, says officials objected to the documentary because they felt it was insensitive. “We made clear to the filmmakers that we were disappointed by many of their decisions, which we think are disrespectful towards victims and their families,” Cochran says.

Cochran points to two scenes in the documentary that show the staff deliberating over whether to include sensitive videos in their exhibits: one video of people who leapt or fell off the buildings as the structures were engulfed in flames and another video that featured a 911 call from a woman shortly before she died. Museum staff ultimately decided not to display those materials, and Cochran argues that using them in the film, particularly without a trigger warning, is insensitive. Rosenbaum says that while the filmmakers debated whether including such footage would be too painful, they felt it was relevant to understanding the decision-making process of what made it into the museum and what didn’t.

Although The Outsider is largely critical of what the museum eventually became, the film shows that building the site took careful planning and discussion. Multiple scenes show staff members engaged in thoughtful debate as well as heated disagreements about what to feature in the exhibits. In a conversation about the sensitive videos, staff members discuss whether including them would tarnish the memory of victims or help memorialize them. And the film includes a few scenes of careful deliberation over language, like when the staff is deciding whether the term “jumpers” is an appropriate way to identify the people who were seen falling from the building. “We can’t presume that everyone jumped,” Alice Greenwald, who is now the museum CEO, says in one scene.

Rosenbaum and Yoder say that when they started to document the museum’s creation in 2008, they expected to tell the story of a site that more actively engaged with the ways 9/11 changed the U.S., including the anger targeted at Muslims and other religious minorities. The filmmakers say they hope the film will encourage reflection on ways to change the museum for the better. “How we ended up here will be the source of debate for years to come,” Rosenbaum says. “But we can fix it.” 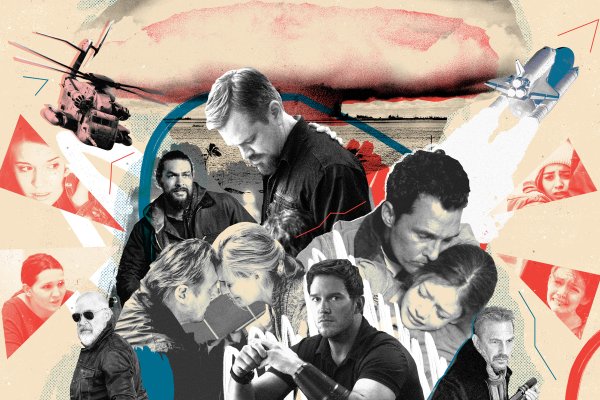 The Lessons of Father-Daughter Action Movies
Next Up: Editor's Pick