The U.S. Offered My Family a Home After the Vietnam War. It Must Do the Same for Those Fleeing Afghanistan

The story and images are all too familiar. American troops withdrawing after several decades, cities falling, a president fleeing, chaotic airports, helicopters hovering over embassies, families desperate to get out in any way they can.

Forty-six years ago, it was Saigon. Today, it’s Kabul.

My family has mourned the loss of their homeland my entire life. Although they’ve lived in the United States for more than 40 years, the loss of their motherland will remain a tragedy in our family history. They still remember hearing the news that Saigon had fallen, whether they were among the crowds at the American embassy, at the Tan Son Nhat airport trying to board an overcrowded flight, or at a refugee camp in the Philippines sitting by the radio.

Read more: What Joe Biden Didn’t Say About the Chaos in Afghanistan

After the Communist takeover, many South Vietnamese, including my family, feared persecution over their ties with the fallen government and their religious beliefs. My parents left before the end of the war with student visas to attend school in the Philippines and eventually the U.S. My aunts, uncles and grandparents either evacuated by plane, or years later, escaped by boat.

Though I was born two years after the fall of Saigon in southern California, I inherited the grief that my family carried. I absorbed their sorrow in the wistful Vietnamese ballads my parents played on their cassette tapes and their anguish in the stories my relatives shared about their childhood homes I never saw.

Many Vietnamese refugees landed in the U.S. after Congress passed the Indochina Migration and Refugee Act of 1975 and the Refugee Act of 1980, initiating the last major immigration admittance to this country. These refugees included Southeast Asian allies and children of American troops, and their resettlement was considered a fulfillment of the Americans’ obligation to their longtime South Vietnamese allies in the war.

Now the Afghan refugees’ survival, too, depends upon this country’s willingness to take responsibility and demonstrate compassion. Since a U.S.-led invasion broke the Taliban control of their country in 2001, the Afghan people have experienced social and political freedoms and rights. The communities and livelihoods created in those two decades will surely be destroyed, as the Taliban poses a terrifying threat to the Afghan people, particularly the women and girls. During their previous occupation, the Taliban enforced a strict adherence to Sharia Islamic law, forbidding women from working or attending school or leaving their homes without a male guardian. And we know what the Taliban punishments will be for political dissenters. We’ve already seen them.

Read more: The Afghan Who Saved My Life May Make It Out. What About Everyone Else?

America chose to become involved in Afghanistan, as it did in Vietnam, and the decision to withdraw troops has again created a humanitarian crisis the U.S. is morally obliged to address. Congress should pass legislation allowing for an expedient and merciful resettlement of Afghan refugees into the country. The U.S. government should also enlist allied countries to pledge the same commitment and press the bordering countries of Afghanistan to admit fleeing refugees so they can be processed for resettlement in a third country. Hundreds of thousands of lives are at stake, and ensuring the safety of the Afghani people should be the utmost priority.

More than 3,000 refugees from South Vietnam enter the camp at Crote Point in Guam Naval Base after they were shifted from Clark Air Base in the Philippines, April 26, 1975.
Bettmann Archive/Getty Images

But there’s another lesson to draw from what happened in the years after the Vietnam War as well. Vietnamese people who resettled in America often endured discrimination. They were told that American sons had died because of them. They were accused of taking American jobs. They were subjected to the anti-Asian harassment that had long existed in this country and has soared during the COVID-19 pandemic. My parents were told to speak English or go back to their country so many times that they learned not to absorb the familiar insult. These Vietnamese immigrants rebuilt their lives in America, establishing communities and contributing to the diversity and achievements of this nation, but they did so in the face of trauma, racism and dislocation and in spite of this country’s fraught history with people of color.

The U.S. is still reckoning with its xenophobia after electing a President who promised to build a wall along the country’s southern border and drastically reduced the number of refugees. The anti-immigrant rhetoric of Donald Trump and his allies emboldened a frenzied nationalism, and we are still healing from the damage of the last administration’s devastating immigration policies. With America’s global reputation tarnished, and the U.S. withdrawal from Afghanistan facing increasing criticism, how the Biden Administration and this new generation of Americans, who did not grow up in the aftermath of the Vietnam War, respond to the inevitable Afghan nightmare is critical.

For many immigrants and refugees, America has been a symbol of hope. And despite the ugliness we have witnessed in recent years, it is possible for us to reclaim some of the ideals we once upheld. I am profoundly grateful for the compassion the U.S. offered the South Vietnamese, and I am keenly aware I would not be here without this act of conscience. But I would also like to believe that we can learn from our past and do better, treating our new neighbors with the dignity and respect that all humans deserve. We cannot give the Afghan people their home country back, but we can make room in ours. 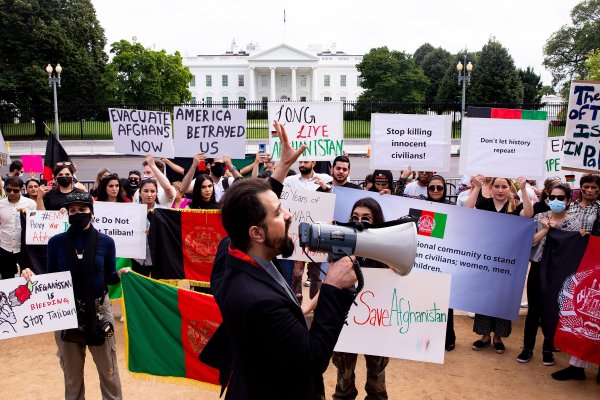 Afghan Americans Scramble to Help Family Back Home
Next Up: Editor's Pick