'It's a Catastrophe.' Iranians Turn to Black Market for Vaccines as COVID-19 Deaths Hit New Highs

Iranians line up to receive a dose of China's Sinopharm vaccine in central Tehran on July 19, 2021. Many others have turned to the black market to obtain shots
Morteza Nikoubazl—NurPhoto via Getty Images
By Tara Kangarlou

In January, Iranian Supreme Leader Ayatollah Ali Khamenei made the sudden announcement that American and British-made COVID-19 vaccines would be “forbidden” as they were “completely untrustworthy.”

Almost nine months later, Iran is facing its worst surge in the virus to date — a record number of deaths and infections per day with nearly 4.2 million COVID-19 patients across the country, and a healthcare system near collapse. “It’s a catastrophe; and there is nothing we can do,” said an anesthesiology resident in one of Tehran’s public hospitals who due to the current surge is tasked to oversee the ICU ward for COVID-19 patients. “We can’t treat them nor help them; so all I can ask people to do is to stay home and do whatever it takes to not get exposed.” The doctor requested anonymity in order to speak freely; others interviewed by TIME asked to be identified only by their first name.

The scale of the crisis is such that doctors feel they have no choice but to speak openly about it, in a regime that ordinarily does not tolerate dissent. On Aug. 10, in an emotional plea for help in Iran’s second most populous city of Mashhad, Dr. Nafiseh Saghafi, the head of gynecology and obstetrics department of Mashhad University of Medical Sciences compared the city’s COVID-19 crisis to that of the horrors of war and begged authorities to do “whatever it takes to help save people’s lives.” Speaking in an audio recording she described the scenes at her hospital (Quaem) a “devastating humanitarian crisis like no other.”

To date, the Iranian government has reported approximately 93,000 COVID-19 deaths since the beginning of the pandemic. However, official death tolls are strongly disputed by physicians and ordinary Iranians. According to analysis published in Iran’s reformist Etemad newspaper on Aug. 14, based on the newly released statistics from the country’s “National Organization for Civil Registration,” fatalities caused by COVID-19 are in fact almost 194,000 — a number that some, including reformist politicians and former Presidential hopeful, Mostafa Tajzadeh, have compared to the martyrs of the Iran-Iraq war.

Iran’s COVID-19 task force chief, Dr. Alireza Zali admitted on Aug. 11 that since the early days of the pandemic Iran had declined to cooperate with the World Health Organization (WHO), to report accurate statistics on the number of infections and deaths, or spend money on buying vaccines.

In what has become an ongoing public spat among exiting and sitting government officials, Zali’s remarks were immediately challenged by the outgoing Foreign Minister, Javad Zarif. In an Instagram post he defended the Rouhani administration’s diplomatic efforts in securing Russian and Chinese vaccines and helping maneuver the crippling U.S and E.U. sanctions that continue to affect Iran’s healthcare sector.

Over the years Iran’s economy including its medical and healthcare sector have been choked by sanctions, especially the Trump administration’s maximum pressure campaign. As a result, foreign transactions with Europe and many other countries are hampered, causing severe delivery delays and shortage of medicine and medical equipment.

In June, the U.S. eased the path for imports of coronavirus-related products, including vaccines, to heavily sanctioned countries like Iran, Syria and Venezuela. But ordinary Iranians say they are not seeing the impact of these restrictions being lifted.

The slow rollout of COVID-19 vaccines

Within Iran, many blame internal corruption, economic mismanagement and the Supreme Leader’s January edict for the country’s lamentable vaccination rate. By the government’s own count, it has fully vaccinated only 3.5 million of its 80 million population. Amir-Ali, a marketing executive in his 40s lost his 78-year-old mother with no serious pre-existing conditions to COVID-19 in May. “Had the government allowed the import of vaccines, had there been management and transparency, my mother would still be alive,” he said.

The regime has so far managed to import a little over 21 million doses of vaccines through a variety of available channels; through China, it has secured over 14 million Sinopharm doses that account for over 67 percent of inoculations in Iran. One million doses of Russia’s Sputnik were among the first delivered batches that were mainly used for frontline healthcare workers. Japan has donated 2.9 million AstraZeneca jabs. Iran’s homemade “Barekat” vaccine accounts for less than seven percent of the used shots, despite initial hype by the regime including the Supreme Leader being photographed receiving his dose.

In late spring, Iran scrambled to pay millions of dollars through Iraq to secure what the government reports to be a “16 million dose order” from the global vaccine scheme COVAX. But to date, the country has only received close to three million doses through the U.N.-backed vaccine supply mechanism, from Italy and South Korea.

On Aug. 11, Khamenei partly reversed his mandate in a televised speech, giving clearance for the import of foreign vaccines, except those “produced by” the United States and the United Kingdom. His remarks were immediately followed by the government’s loaded promise of importing 120 million doses of vaccine in the next three months.

“They were probably waiting for the new administration to come in so they could give them some sort of credit,” said Narjes, a 35-year-old resident of Tehran who like many other Iranians has been fruitlessly searching for a shot. “But what difference does it make? They needed to have a cohesive and organized plan for vaccines the same time that other countries were scrambling to help their citizens. Now it’s too little, too late.”

The black market for shots

In the absence of an organized and speedy vaccine strategy by the government, a lucrative and corrupt black market for vaccines has arisen, affordable only to the well-off at a time of severe financial austerity and the dismal devaluation of the Iranian currency.

Meysam, a young businessman, says he and his family bought his two doses of the Pfizer shots from an “unknown dealer.” “I got my first dose in May a few months after my mom and my uncle bought theirs in March. They both showed the same side-effects that my other uncle had shown in the U.S,,” he explained. “That was my only guarantee that it’s not fake.” Meysam said dealers who sell the Pfizer vaccine give customers “certificates” that are stamped by a hospital in Erbil in Iraqi Kurdistan.

In a less covert operation, according to Meysam and others, there are also private dealers who import AstraZeneca through the UAE and elsewhere by cutting deals with custom security and importing them under the guise of other medication.

Hundreds of other Iranians with the means to do so have fled to neighboring countries of Armenia and Turkey in hopes of inoculating themselves. Sima along with her family traveled to Armenia in July to get her first dose of AstraZeneca. “The entire trip cost us $3000—a hefty sum, but I didn’t see any other option. It is truly humiliating that we need to go through these measures for a dose of vaccine that our own government can’t get us.” In mid-July Armenia changed its law, requiring foreign vaccine-seekers stay for 10 days before qualifying for a shot.

Iranians are also being forced to turn to the black market for lifesaving medicines for those struck down by the virus. Amir-Ali said he was advised by the medical staff in the private hospital where his mother was hospitalized that he had to buy all her medication through private dealers. “I paid close to 100 Million Toman [$4,000] in total in just a few weeks for healthcare costs and to find basic medication that otherwise you should find in any pharmacy or hospital. Why? I don’t even know if all those medication were needed.”

A “corrupt medical mafia” has sprung up, he said, as the country deals with a scarcity of everything from oxygen to Remdesivir. But he lays blame for the situation at the foot of the Iranian regime’s ultimate authority — the Supreme Leader who rejected Western-made vaccines back when they might have made a difference. “This crisis is a direct result of the regime’s failure,” he said. “Each time I think about my mom, I ask myself why do I have to live in a society where the lives of its people are based on the decision-making of one single individual. So many people died, so many parents passed, just because of one man’s decision. This is what hurts me the most.” 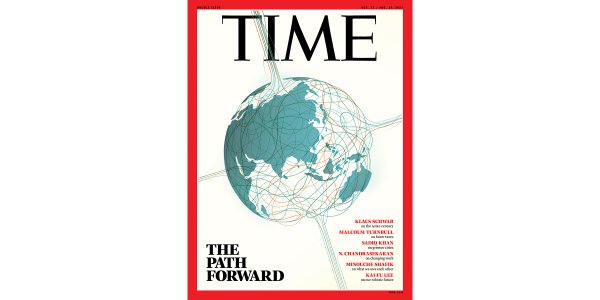 Finding Purpose at a Moment of Crisis and Division
Next Up: Editor's Pick