Alexandra Daddario wasn’t expecting The White Lotus to be such a big hit. The actor, whose past credits include True Detective and the Percy Jackson series, was mostly just relieved to be working again when she booked a role on the HBO show in the midst of the pandemic. “Based on my experiences, I try not to have expectations in my line of work,” she says. “I was feeling a sort of panicked fear that a lot of us had—and then this show came along, and it was a pleasant surprise to be able to do something this incredible during lockdown.”

Audiences have agreed with her assessment. HBO’s The White Lotus, which follows an ostensibly idyllic week at an uber-expensive Hawaiian resort that quickly descends into macabre madness, has been one of the breakout TV hits of the summer. Fans have excitedly shared reactions and theories on social media after each installment, while critics have hailed Mike White’s show as one of the year’s best. TIME’s Judy Berman described it as “darkly hilarious” and “existentially terrifying,” and HBO recently picked up the show for a second season, which will follow a new cast of characters at a different resort.

On Sunday, the show’s first season finale aired and finally revealed the answer to the cliffhanger, introduced in the premiere and teased throughout the ensuing episodes, of who died at the resort. Daddario’s character Rachel, meanwhile, made a heartbreaking decision about her future. TIME talked to the actor about that scene, going toe-to-toe with Connie Britton and being intimidated by Gen Z. Here are excerpts from the conversation; spoilers for The White Lotus abound.

TIME: There have been so many theories online about who gets killed at the end of The White Lotus. When you were first reading the script, did you fear that Rachel was going to be axed?

Daddario: I don’t even remember what I thought: I think that I was so lost in the story and my relationship with other characters. I probably was like, ‘Oh, I wonder who dies—but it’s almost too obvious to be me.’

Was there a detail about Rachel that helped you unlock her character?

I wanted to unlock how trapped she really feels. I feel confident in where I am in my life and career in a lot of ways. But you know, that’s always a slippery slope, especially when, as an actor, you don’t know what your next job is going to be. So it was really unlocking that this is someone in her 30s who really hasn’t achieved the success that she wants and can’t stand on her own two feet in her career. She got caught up in something that felt more meaningful than what she was doing, while really not getting in touch with how she got into this relationship in the first place.

Rachel has an excruciating relationship with her new husband, Shane (Jake Lacy). Have you met many versions of Shane in the world?

Yes. It’s more complex than just, ‘Oh, this guy’s a douchebag.’ Something really interesting about Shane is that in any conversation where I’m coming to him with something emotional, or something that contradicts his view of the world, he just walks away or gets angry. That’s something I’ve definitely encountered. And I don’t want to say men specifically, but I certainly do know men where it’s just: ‘This is my view of the world, this is the way it’s supposed to be, I can’t handle what you are feeling. Therefore, I’m angry. And I’m getting out of the situation until you come around and be what I want you to be.’

It’s always fun to see journalists portrayed onscreen, even in depictions as bleak as this one. Having been on the other end of countless junkets over your career, did this role help you better understand or empathize with mid- or low-level journalists?

It definitely made me think about what that life is like. I’ve been in junkets where these people have been waiting for however long to speak to us, then they come in and get five minutes. And if actors are long-winded—as I have the tendency to be at times—you can really only get in two questions and then they rush you through.

I also think it’s so brilliant that Rachel is not that good at what she does. She’s kind of self-aware about that. She’s doing what she calls clickbait pieces and has been getting really discouraged that she hasn’t been able to break out this way of making money. I can imagine it’s very frustrating.

A few aspects of Rachel’s character have been closely scrutinized on Twitter: the book she’s reading (Elena Ferrante’s My Brilliant Friend) and her Goyard bag. What was the meaning behind those items?

No, it’s so funny because someone else sent me a thread about the Goyard bag, and I didn’t know what a Goyard bag was. These are props that were put in my hand, and no one told me, ‘You’re reading this because the metaphor is blah, blah, blah,’ or ‘You’re holding this very expensive status symbol purse because x, y, z.’ My focus as an actress is so much on the character and where I’m at. That brilliance entirely lies in the prop department, Mike White, or whoever made those decisions.

Rachel has some incredibly awkward face-offs with other characters, including Nicole (Connie Britton), Olivia (Sydney Sweeney) and Paula (Brittany O’Grady). What was it like shooting those scenes?

Amazing. Part of the reason I’m an actress is that there’s some part of me that enjoys feeling things that are maybe uncomfortable. Especially with someone like Connie Britton: being in the scene, being intimidated and reacting off each other, I enjoy that experience. Like, wow, this person can get into character to the degree to make me feel this awkward—and that translated to people telling me how uncomfortable that scene is.

And with my scenes with Sydney and Brittany: I’m 35, and am at the point that when I’m with 23-year olds, I revert to being a teenager. It’s that need to be accepted. These college kids are making me feel so small to the degree that I have to go and show off to make myself feel better. And there’s definitely that dynamic in real life between millennials and Gen Z: not really understanding each other, and being sort of close in age but really having such different experiences.

In the final moments of the finale, Rachel decides to reconcile with Shane. What did you think of that decision?

The decision made a lot of sense to me, because she is completely trapped. I think that she’s probably had some rough stuff happen to her that sort of made her feel unable to leave. And she’s not self-aware enough to admit, until the final episode, why she really got into this relationship.

And I think that there’s this fear aspect. That self doubt and insecurity, and sort of the repercussions of being told that she’s just hot her whole life, has just made her afraid that she doesn’t have anything else.

Your final lines are devastating: “Everything’s fine. I’m happy, I promise. I’ll be happy.” How did you approach those lines?

I had experienced in my life, on more than one occasion, a huge pressure to be happy. Being unhappy with something or someone else’s behavior is a lot of pressure for other people. In this situation, she is being told by his mother and by him, ‘What is there to be unhappy about?’

And her reasons to be unhappy are completely legitimate. But on paper, she doesn’t feel like she has a reason. Her job now is to be happy and to make this man happy. And there’s such a deep sadness in that and not being true to yourself.

I don’t think it’s going to turn out very well for her. But I’ve definitely felt that before where you bounce around, trying to be happy for somebody else who really isn’t listening to why you’re really unhappy. There’s so much solace in being heard: just having your partner listen and understand. But there’s none of that in this relationship. So I think she’s relinquishing herself to this life of, ‘I’m going to pretend to be O.K., because if I ever express my real feelings, then everything goes to sh-t.’

What advice would you have given to Rachel in that moment?

I mean, the advice is to walk away. But like all things in life, it’s complicated. In her head, I don’t think she ever was going to walk away; Maybe eventually, but she’s just not ready at the moment. So I’m not sure what advice I’d give Rachel. Like anything, she just has to go through it on our own. 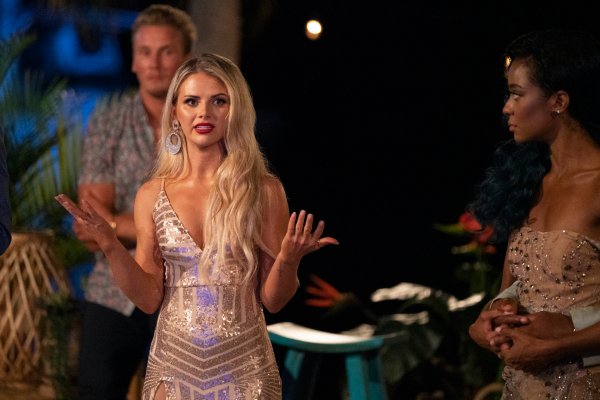 Two Feminists Who Love Reality TV Wrap Their Minds Around the FBoy Island Finale
Next Up: Editor's Pick