The Language Of Climate Change Just Changed in a Major Way

In so many ways, not much has changed since the United Nations Intergovernmental Panel on Climate Change (IPCC)—perhaps the premiere climate science-and-policy organization in the world—published its last major report in 2014. Just as it was seven years ago, the latest edition, published on Aug. 8, is largely gloomy in outlook, with grim warnings of what the future looks like given the self-destructive trajectory to which humanity seems to have committed itself.

However, there are some subtle differences that, on deeper investigation, are truly incredible, indicating just how far down the nightmarish path we actually are.

In each of the IPCC’s six Assessment Reports, the group has compiled a “summary for policymakers,” in which its findings are distilled down to what it most wants to communicate to those occupying seats of power around the world. The language choices, therefore, are no accident. Indeed, the 42-page document that comprises the 2021 IPCC report has no fewer than 79 drafting authors, and an additional 42 contributing authors. And every one of the IPCC’s policymaker summaries has included a footnote explaining in explicit terms what it means for the report to use the phrase “high confidence” vs. “medium confidence,” for example.

And, if you compare it to the way language has been wielded in the last four reports, the rhetoric of the 2021 is striking. The chart below divides up the terms laid out by the explanatory footnote referenced above into two categories: “emphatic” and “not emphatic” (these are my terms), and shows a clear change in this year’s report:

Perhaps this isn’t that surprising, given the prominent place climate change-driven extreme weather has occupied in the international conversation over the past year or so. But the IPCC is not social media, nor is it cable news. In fact, if anything, the IPCC is more often criticized for being too conservative than for being alarmist After all, its reports need to represent the consensus of dozens and dozens of scientists of varied backgrounds.

This makes it all the more striking to see such a rhetorical shift to more confident, emphatic language.

It’s useful to look back at the IPCC’s 2001 report and compare some of the IPCC’s specific language choices to those used two decades later in today’s report.

In the chart above, I’ve normalized the frequency of usage of each phrase to account for the fact that the 2021 report is about 1,750 words longer than the 2001 version. Across the board, the 2001 report uses all of the phrases less often than does the 2021 version. The biggest changes are seen in those phrases that suggest confidence in the IPCC findings. (There are some exceptions for the very highest confidence terms—”extremely likely,” “exceptionally likely,” etc.)

This might feel like a sort of academic exercise, but language matters—especially in a text so widely disseminated and so extensively regarded as the closest thing to the One True Source that we have on climate change science. The language adjustments represent huge advances in our scientific understanding of the global climate, thanks to decades of instrumental observation, discoveries of new data sources like ice cores and fossil records, innovation in statistical modeling, a more fine-grained and diverse collection of data and, especially, the tireless work of thousands of clear-eyed scientists.

It’s almost certain that the results of this effort, as written and workshopped over and over for the past few years by some the world’s best scientists will indeed end up quoted on the U.S. Senate floor in Washington, in the House of Commons in London, in E.U. committee meetings in Brussels and everywhere else where the essential decisions of our time will be made in the coming years.

For those who hope to see humanity pull through and adapt to climate change, the ability to cite with unprecedented certainty both the impacts of climate change, and the scientific community’s projections of what’s to come—and what must be done—can’t be overstated. 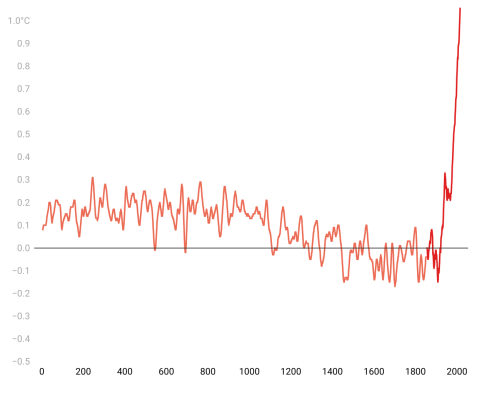 'Widespread and Severe'
Next Up: Editor's Pick