Tom Daley of Team Great Britain is seen knitting in the stands during the men's 3-m springboard final on day eleven of the Tokyo 2020 Olympic Games at Tokyo Aquatics Centre on Aug. 03, 2021 in Tokyo, Japan.
Clive Rose—Getty Images
By Melissa Locker

Tom Daley has been making a name for himself at the Tokyo Olympic Games on and off the diving board.

The British diver, who has been competing in the Olympics since he was 14 years old, won a gold medal last week in synchronized 10-m platform diving alongside his diving partner, Matty Lee. Daley, though, has stayed in the headlines thanks to what he calls “his secret weapon”—his knitting skills.

Daley went viral when he was spotted knitting while cheering on the divers at the women’s 3-meter springboard final. It was such an unexpected sight that the BBC’s sports commentators mentioned it on air during their coverage of the diving competition. “What do you reckon he’s crafting there?” asked BBC commentator Katherine Downes. “I wonder who he’s making that purple concoction for?” It even made it to Team Great Britain’s official Twitter page. (Daley later reported that he was making a sweater for his friend’s French bulldog.)

Since then Daley’s knitting has been newsworthy—especially when he posted the medal cozy he made to keep his gold medal safe from scratches on his knitting Instagram account, @madewithlovebytomdaley. Now, Daley has unveiled his masterpiece, a Team Great Britain cardigan with the Olympic rings emblazoned on the back, sharing the image of the incredibly complex craft project on his social media.

“When I got to Tokyo, I wanted to make something that would remind me of the Olympics to look back on in the future,” he captioned the photo. “I designed a pattern for the colour work that would signify everything about these games! On the back I went for classic @teamgb logo, the shoulders have a flag and GBR on them. For the front I wanted to keep it simple and I tried my best to embroider TOKYO in Japanese!” The end result is a downright stunning hand-knit cardigan, sure to impress even the most prolific amateur knitters.

While he has the world’s attention, Daley decided to use his platform for good. “Since my knitting page is gaining momentum, I wanted to take the opportunity to try and raise some money for the @thebraintumourcharity in memory of my Dad!,” he wrote. “Any donations would be greatly appreciated.” Daley’s father, Robert Daley, died in 2011 after a battle with brain cancer. 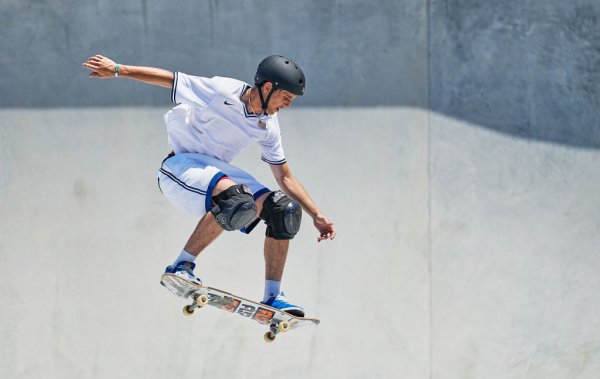 U.S. Skateboarders Are Chill About Being Beaten
Next Up: Editor's Pick