The Bipartisan Infrastructure Deal Is a Return to the Old Way of Politics. That’s A Problem for the Climate

The NRG Energy Inc. WA Parish generating station, home to the Petra Nova Carbon Capture Project, in Thompsons, Texas, U.S., on Feb. 16, 2017.
Luke Sharrett—Bloomberg/Getty Images
Ideas
By Michael E. Mann
Michael E. Mann is distinguished professor of atmospheric science and director of the Earth System Science Center at Penn State University. He is author of the recently released book, The New Climate War: The Fight to Take Back our Planet.

The bipartisan infrastructure package being negotiated in the Senate promises to fund some important climate programs, with sizable expenditures for cleaning up abandoned oil wells, replacing lead pipes and repairing roads and bridges. The $50 billion in climate resilience funding will protect people from the storms, droughts, floods and other extreme weather events made worse by climate change.

Unfortunately, it will do little to address the coal, oil and gas use that is driving climate change. Even worse, many sections, if not removed, will actively make it worse.

The looming bipartisan infrastructure deal, if it passes, will be celebrated as a return to pre-Trump politics where politicians reach across the partisan divide, compromise where necessary, and work toward the wrong shared goals.

But it’s business as usual when it comes to the defining challenge of our time: the climate crisis. The bill provides nothing tangible to expedite the country’s urgent need to transition towards renewable energy.

This deal is a far cry from meeting the moment we find ourselves in. It does not address our dependence on fossil fuels, and instead further enables it. Instead, it is focusing money and resources on technologies that don’t work while ignoring the clear winners—solar, wind, etc.—we have in front of us.

In the bill’s current incarnation, I am left wondering what happened to President Joe Biden’s pledge to transform our heavily fossil-fuel-dependent economy into a clean-energy economy. In his campaign he promised to end climate-damaging carbon emissions from U.S. power plants by 2035. But this bill wastes billions of dollars on dubious carbon capture and the fossil fuel industry’s attempt to use hydrogen as a cover to build new gas plants—both of which will do nothing more than strengthen the industry’s hold.

Further, while Biden pledged to address issues of environmental justice by directing 40% of the administration’s climate and clean-energy investments toward low-income and frontline communities that have most suffered the environmental and health risks from fossil-fuel dependence, this bill weakens critical environmental review processes, placing many of these communities at even greater risk. For example, one section of the bill exempts oil and gas pipelines on federal land from being subject to environmental assessments.

Donald Trump was rightly ridiculed for suggesting the solution to California’s climate-change-fueled wildfires was to cut down the trees (and adopt better raking technique). But the bipartisan infrastructure bill includes the same sort of policy Trump supported, calling the logging of 30 million acres of federal forests and $1.6 billion in new taxpayer-funded subsidies to the logging industry “wildfire risk reduction,” waiving environmental protections for logging projects in the name of “fuel breaks,” and giving hundreds of millions of dollars to the timber industry to log new areas and build new processing and power plants under the guise of “ecosystem restoration.”

What passed for wacky theatrics when Trump suggested it, now gets labeled shrewd political calculus in 2021. But it’s not wise; it’s dangerous. We need healthy forests to capture carbon in the only safe way: the natural way. Giving the timber industry the keys to our national forests is like giving fossil-fuel giant ExxonMobil the keys to our climate. And speaking of ExxonMobil, senators who belong to the infamous Exxon 11 made up a third of the bill’s co-authors.

If healthy forests are the safe, reliable way to sequester carbon, industrial carbon capture and sequestration is the opposite. The promise of technology that will ultimately make their carbon-emitting profit stream climate-friendly provides the fossil fuel industry with potent talking points as they continue to generate planet-warming carbon pollution.

But it’s always just that, a false promise to capture future emissions, as exemplified by the one working carbon capture project in the U.S. shutting down already. The carbon capture process required so much energy for the coal plant it was designed for, that the company NRG Energy had to build a natural-gas power plant to run the carbon capture equipment. Suffice it to say, building a gas power plant to clean a coal-fired power plant is much more expensive— in terms of energy, economic and environmental impact—than simply providing that same power from clean sources in the first place.

Alas, bipartisanship apparently embraces failure, allocating $15 billion to carbon capture projects over the objections of environmental groups. That same $15 billion could have just gone to clean energy, instead of cleaning up the mess created by polluters. Or it could have gone to the lead pipe replacement, for which Biden’s American Jobs Plan budgeted $45 billion but this deal only gives $15 billion. What good, in the end, is bipartisanship when one party insists on making the problem worse and the other seems content to enable? What you end up with isn’t a policy that moves us half-way in the right direction, but one that takes us half-way in the wrong one.

Now, in the White House’s defense, they insist that the bipartisan deal is just the first step, with a proposed $3.5 trillion package to come that will move the nation towards carbon-free electricity, make America a global leader in electric vehicles and create millions of jobs in solar, wind and other clean-energy industries. That package will have to pass through the Senate reconciliation process, in what is almost certain to be a strictly partisan vote by all 50 Democratic Senators, including two—Krysten Sinema from Arizona and Joe Manchin from West Virginia—who have hinted that they might not support such a big package.

What we do over the next decade to address climate change will largely determine what sort of future we leave behind for our children and grandchildren. The right path—the path toward a sustainable economy and planet—is paved with cheap and clean renewable energy and climate-friendly policies. The wrong path—which leads only toward deeper environmental degradation, social injustice and catastrophe—is paved with fossil fuels. The choice is clear.

For the sake of bipartisanship however, Republicans are—with the current infrastructure bill—getting a talking point they can use for re-election as the money flows to their home districts and a national-level image rehabilitation they are badly in need of after the events of the past several years. Polluters, who fund their campaigns, are getting billions of dollars to continue business-as-usual exploitation of our environment. And the rest of us, and the planet, are getting ripped off.

As disappointing as that might be, there is fortunately still a path forward. President Biden and Congressional Democrats have a mandate from their voters to act on climate. They enjoy high levels of public support for the climate provisions in the prospective $3.5 trillion reconciliation bill. They must make that bill law. Failure is simply not an option—for the Democratic party, our nation, or our planet. 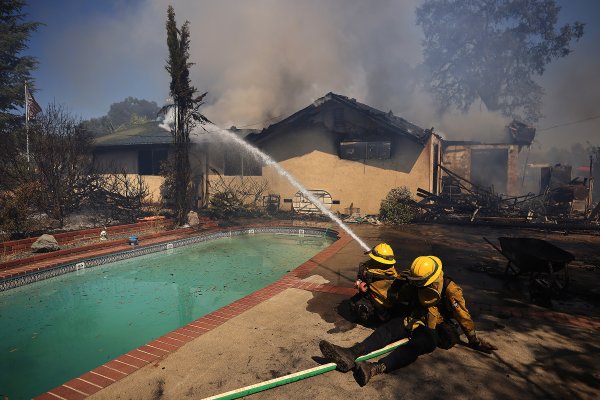 The World Has Been On Fire. Here’s What It Looks Like
Next Up: Editor's Pick