Mike Carey speaks at a rally hosted by former President Donald Trump after receiving his endorsement on June 26, 2021 in Wellington, Ohio; Shontel Brown speaks during a Souls to the Polls rally at Sanctuary Baptist Church on Aug. 1, 2021 in Cleveland, Ohio
Scott Olson—Getty Images; Michael M. Santiago—Getty Images
By Philip Elliott

In the end, what passes for mainstream politics —at least at this moment—prevailed last night in Ohio in an early glimpse of Democrat and Republican voters’ mood ahead of next year’s midterms.

Democrats nominated an Establishment-minded team player for an open House seat near Cleveland, beating out an unapologetically far-left challenger. Republicans in central Ohio chose a coal lobbyist endorsed by former President Donald Trump over 10 other candidates in a parallel move that reflects where that party’s Establishment has decided to lay its loyalties.

As we’ve written before, both parties are going through an identity crisis, and nowhere is that more on display than in Ohio. In the final days of the nasty Democratic primary up near Lake Erie, two-time presidential hopeful Bernie Sanders and his supporters were out in force, campaigning for longtime ally Nina Turner and pitching her hard-left progressive credentials to join the ranks of The Squad. Meanwhile, the No. 3 in House Leadership and a dean of the Congressional Black Caucus, Rep. James Clyburn, was at the pulpit preaching why Democrats needed to send Cuyahoga County Party Chairwoman Shontel Brown to Washington to stand with President Joe Biden and Speaker Nancy Pelosi.

It was, in many ways, the unresolved fight of 2016: Sanders, an independent who identifies as a Democrat only when he wants to be their nominee, versus the mainstream of the Democratic Party that twice passed Sanders over for more widely palatable candidates like Hillary Clinton and Biden. As I noted in a 2017 cover story from Ohio, the fight over the Democrats’ identity is one that pits idealistic progressives against grounded moderates who rightly note that the bulk of the country is on their side—even if Twitter would have you believe otherwise.

Need proof? Turner’s campaign implied in its ads that Brown was guilty of ethics violations and heading to jail. Brown’s team and outside allies—including the fiercely centrist Third Way—simply asserted that Turner was too partisan to ever deliver anything and would be part of the burn-it-down caucus. Even in defeat, Turner proved ready to prove her critics right. “I am going to work hard to ensure that something like this never happens to a progressive candidate again,” Turner said last night in a warning shot to fellow Democrats. “We didn’t lose this race. Evil money manipulated and maligned this election.”

On the Republican side, the contest in the Columbus area came down to a choice between known quantities like former state Sen. Bob Petersen who ran with the backing of Ohio Right to Life or someone plucked from near-obscurity by Trump. Both candidates tried to wrap themselves in the MAGA flag to some degree, but Trump made clear that only energy lobbyist Mike Carry had his endorsement. In the end, Carry prevailed by 24 points over his closest rival.

Neither district is expected to be competitive in a general election, which is why Marcia Fudge stepped down from the Cleveland seat to become the Secretary of Housing and Urban Development in the Biden Administration and why Republican Steve Stivers left his post to lead the Ohio Chamber of Commerce. Ohio’s congressional districts are as gerrymandered as anywhere so the winner of the party primaries in each all but guaranteed a Democrat will replace a Democrat, and a Republican will replace a Republican. Fudge won her last term with 80% of the vote and Stivers won his with 63%.

Special elections are often over-read as barometers of the electorate’s mood but they do offer hints at where power and political momentum is heading. Despite low turnout—75,000 Democrats around Cleveland and 50,000 Republicans near Columbus—these early tests are the most accurate polls of where voters seem willing to go, at least inside their own party’s tents. Among Democrats, at least in northeast Ohio, they decided to go with someone who ran on a message of working to build coalitions over an avowed never-compromise bomb-thrower who compared voting for Biden to eating a bowl of feces last year. And among Republicans, it proves yet again that Trump is the mainstream of the GOP at the moment.

Then again, all moments pass. Progressives flooded Ohio with bodies to volunteer. Turner, as a former leader of Sanders’ political machine and one of his top spokespeople, may end up carrying more consequence as a martyr of the Establishment than as a viable House candidate. And with a raft of pissed-off progressives seeing her loss, she may prove a powerful foe to the Establishment yet. By midday today, Turner was trending on Twitter. Republicans, still privately frustrated with Trump’s continued insistence on wrapping his arms around The Big Lie, are watching him hoover up campaign cash but spending little of it to actually help the GOP. But Trump is not invincible, as evidenced last week when his endorsed candidate in Texas lost.

In that quiet rage, there are reasons to think both the progressive wing of the Democratic Party and the George W. Bush-styled arm of the GOP could both find their spot atop the partisan pile at some point. But for now, the mainstream holds, at least in Ohio. Like most things in D.C., though, that status quo is tough to change but never permanent. 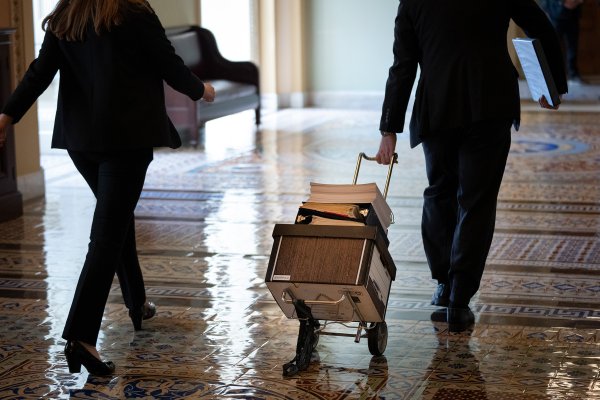 Buried in the Bipartisan Infrastructure Bill: In-Car Breathalyzers
Next Up: Editor's Pick