These Women Fought for Afghanistan’s Future. Now They Don't Want to Leave It Behind

Afghan women, youths, activists and elders gather at a rally to support peace talks and the republic government in Kabul, Afghanistan, on March 29, 2021. According to the reports, Turkey will host the Afghanistan peace-talks summit in the upcoming days.
Haroon Sabawoon—Anadolu Agency/Getty Images
Ideas
By Gayle Tzemach Lemmon
Lemmon is the author of three New York Times best sellers, including The Dressmaker of Khair Khana. She is an adjunct senior fellow at the Council on Foreign Relations.

Last week more than 200 Afghan interpreters who worked with the U.S. military landed in Virginia, recipients of a special visa for those who served alongside U.S. forces. Interpreters who risked their lives serving as the eyes and voice of U.S. troops are receiving at last the administrative okay to come to America with their families to escape the Taliban.

What is not yet clear is how the story ends for the hundreds of Afghan women who supported the U.S. and NATO diplomatic effort these past two decades. And the thousands of community activists across the nation advocating for women. What happens to the women who served U.S. State Department officials, who worked in the U.S. embassy, and who implemented aid programs? Women who stood up alongside the internationals in their country to push for progress for women and girls?

Right now, Afghan women activists who came of age in the two decades following America’s 2001 toppling of the Taliban face an urgent question: do they stay in Afghanistan and continue their work on the ground or seek safety in a neighboring country or an overseas haven such as the U.S., Canada or the U.K.? A generation of Afghan women leaders who pushed for the progress of Afghan women and girls and changed their country in the process must now decide their own fate, with little chance of help from their former allies. I have had the privilege of writing about many of them since 2005 and we have stayed in touch this past decade and a half. Their journey now faces a question mark that has no right answer, only deep responsibility and real consequences.

For some, the answer is to stay—at least as long as they can. That is the answer Kamila Sidiqi gave to her own question of what is next. During the Russian invasion, the Afghan civil war and Taliban rule, she never left her country. Indeed, she braved rockets falling from the sky to attend high school while her hometown of Kabul was gutted. Her father taught his nine daughters from girlhood to be patriots who served their nation and loved their land. During the 1990s, when the Taliban ruled Kabul, Sidiqi remained in the city and started a dressmaking business that gave jobs to women and girls around her neighborhood, including the daughters of Taliban. We have spent a lot of time together since 2005, discussing the future, and I have never seen her more determined, or more concerned for the next generation.

She has the ability to leave Afghanistan, but is fighting to remain. She is pushing forward with her consultancy, employing dozens and training hundreds of women on the basics of business. The political uncertainty means business of all kinds is now a question mark and securing investment an extreme challenge, and still she does not feel she can leave, despite the fear she feels—for the first time ever—in her own home city. Things feel more dangerous in Afghanistan, she said, even more than in previous years, because now no place is safe from attack. Still, she says, her job is to stay and to be there for the majority of people in her country who want to support their children, earn a decent wage and fight for a better future.

“The people living in Afghanistan need jobs, they need work, they need to survive,” Sidiqi says. “I always gave a commitment to my country to be there for it. This is the time that I have to be here for my people.”

Others find themselves working overseas in order to stay safe while their hearts and heads remain in Afghanistan, focused on helping those in danger.

Wazhma Frogh, whom I first met in 2008, worked on the peace process for the past several years. She served as part of the High Peace Council and has worked since the early 2000s as a peace activist and advocate for women and girls. She cofounded the Women and Peace Studies Organization a decade ago and has played an active role in the Afghan Women’s Network. The U.S. State Department gave her its Women of Courage Award in 2009. In her family are women who have broken all kinds of taboos, in public service, the private sector and academia.

She now has left nearly every one of her loved ones at home to seek safety in North America. Each night her day starts. Beginning at 11.30 pm she gets to work speaking with women who are facing danger across the provinces and seeking her help. Saturday night into Sunday morning she stayed up working to help women from Herat, Kandahar and Helmand. Airports are closed and phone lines are largely down due to the fighting. This means getting women activists to safety is not only very dangerous, but extremely difficult. Even moving a family from one district to another is not easy now, let alone from one province to another, especially with cell phone connections intermittent.

“It is very complicated; you feel guilty because of the fact that I have had the opportunity to save my life that ten or a hundred or a thousand other women didn’t have,” Frogh said. “But at the same time the chance that I am able to raise their voices makes it mean something.”

Frogh wrestled with her decision, and with the reality that the people she loves most in the world remain in Afghanistan. But in the end she felt she had to continue speaking up for others and, for the sake of those who counted on her, she had to take care of herself.

“There is this expectation that activists need to sacrifice their lives and know that if they are killed there will be a vigil in their names,” Frogh said. “But I don’t want to be a vigil, I want to be a help to all those people who stood by me.”

Nargis Nehan knows firsthand the weight of this personal deliberation between the need to keep herself alive and the duty to protect others. The breast cancer survivor leads an NGO focused on women and peace building. She does all she can to avoid risk, but in the end has told her mother, with whom she is close, that she is reconciled to whatever comes.

“I have dedicated my life to this work, and I love what I do trying to raise the voice of those that are voiceless,” Nehan said. “If I have helped someone, that means more to me than having a comfortable day, so that is why I am staying here. This is the hardest time—if anyone is committed to trying to make a difference for women and girls, then this is the time.”

Like Frogh, Nehan spent most of this past weekend talking to women and men in Kandahar, Helmand and Herat forced to flee their homes and their possessions as a result of the fighting. She is battling now to get more emergency support from the U.S., Europe and other NATO allies to women who spoke up for other women who now have absolutely no place to go and no place safe to which to escape. And she says there is no time for the luxury of looking away.

“We have no choice but to get back to our struggle; we need to talk about peace in Afghanistan,” Nehan says. “We cannot get out of this responsibility, no matter how bad the situation gets. The world should not see us as victims begging for their support; women have been a consistent and loyal partner for the international community for the last 20 years. We have never changed our position no matter how hard the situation has gotten, and we will continue our struggle.”

All the discussion with activists made me ask a question I had not wanted to, but now could not think how to avoid. Wasn’t Nehan worried about the danger that might lie ahead if the Taliban returned to power?

“There might be some of us that might be sacrificed; that is the very harsh reality of the struggle,” Nehan says. “But how many will they be killing? They might terrorize people, they might kill some of us to shut others up but that will not continue endlessly because women will organize and will raise their voice.”

Having spent years interviewing young women like Sidiqi who served as their family’s sole breadwinner under the Taliban in the 1990s, I know she is right. In the 1990s, during life under the Taliban, Afghan women started home businesses, taught school, served as doctors, worked with health-related NGOs, and taught Microsoft Office. Women made the difference between survival and starvation for their families and made the most of the narrow space they had for their communities. Unacknowledged outside their borders and underground within them, they worked for a brighter path for the next generation. This time will be no different.

Afghan women will push forward no matter what. The only question is how bad it will get for them: will the Taliban once more beat with sticks and television antennas women who challenge the status quo? Will they imprison women who break their rules and ban women from going to work or university? Will they force fathers at the threat of death to hand their daughters—sometimes girls only in their teens—over to marry Taliban fighters? Is there a chance the world will be there to support them diplomatically, politically and economically as they live on the front lines of extremism and fight for their futures and their country’s?

Right now the answer looks to be no. And that is a loss for all of us. 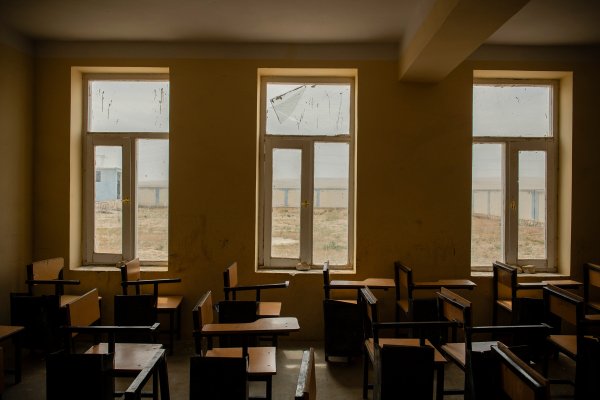 Girls Education in Afghanistan at Risk from U.S. Withdrawal
Next Up: Editor's Pick