How Obamacare Helped Americans With Disabilities

The US Capitol is seen in Washington, DC, March 23, 2020.
SAUL LOEB—AFP/Getty Images
By Abigail Abrams

Americans with disabilities saw major increases in health insurance coverage over the last decade since the Affordable Care Act (ACA) was passed, according to new federal data released Monday.

The proportion of working age adults with disabilities who had health insurance for the whole year increased from 71.4% in 2010-2011 to 81.2% in 2017-2018. The biggest gains took place immediately after 2014, when the Affordable Care Act’s main insurance changes went into effect, according to a report from the Department of Health and Human Services. The report also found that the proportion of people with disabilities who were uninsured for the whole year was nearly cut in half, falling from 17.1% to 9.3% over the same time period.

Coverage gains for Medicaid, the health insurance program for low-income Americans, were particularly large among people with disabilities, growing from 31.4% in 2010-2011 to 37.2% in 2017-2018, according to the report.

However, there’s a long ways to go. Nearly 10 years after the ACA’s passage, the report found that adults with disabilities were still 5% less likely to have insurance for the whole year than adults without disabilities, 17% more likely to be uninsured for the entire year, and 54% more likely to be insured for part of the year. If you combine their rates of being uninsured for the whole year (9.3%) and part of the year (9.5%) in 2017-2018, consistent health insurance coverage remained out of reach for nearly 1 in 5 disabled adults.

The disability community has also been hit hard by the pandemic. Many people’s disabilities make them particularly vulnerable to getting severely ill from COVID-19, and the spread of the virus disrupted their routines, prevented them from accessing regular care and isolated many from their support systems. It also thrashed disabled Americans economically: Workers with disabilities are disproportionately employed in industries that the pandemic devastated, like retail, hospitality and food service, are more likely to work in entry level roles and can take longer to find a new job once they’ve been laid off.

“Medicaid expansion and access to health coverage under the Affordable Care Act mean that today, more people with disabilities have health insurance. But by every measure, the costs of the pandemic have been amplified for people with disabilities,” HHS Secretary Xavier Becerra said in a statement. “COVID-19 illuminated the work that remains to make our country inclusive and accessible for everyone.”

Before former President Barack Obama signed his signature health care plan into law in 2010, people with disabilities and chronic illnesses often had trouble securing any health insurance. Private plans could charge them more or deny them coverage due to pre-existing health conditions, and insurers often imposed annual or lifetime limits that could hurt people who needed expensive care.

Once the ACA was the law of the land, these practices were banned and by 2016, more than 20 million Americans gained health insurance coverage. In June, HHS announced that number had grown to a record 31 million Americans who now have coverage through the Affordable Care Act. Research has shown that having health insurance boosts people’s access to health care, which can significantly improve their health. Since Obamacare was passed, studies have found the law led to a rise in early cancer diagnoses, improved rates of treatment for diabetes, high blood pressure and kidney disease, and better self-reported health.

It also allowed states to expand Medicaid to cover more low-income residents, reducing racial disparities in accessing care, helping people obtain treatment for opioid addiction and quit smoking, and lowering rates of medical bankruptcy and poverty. A recent study in JAMA found that medical debt in states that expanded Medicaid fell 44% from 2009 to 2020, compared to a 10% decline in states that didn’t expand.

Such changes slowed in recent years as the Trump Administration took steps to curtail the ACA. The country’s overall rate of uninsured people actually increased slightly starting in 2017 and for people with disabilities, the proportion with Medicaid coverage dropped from 39.8% in 2015-2016 to 37.2% in 2017-2018. This coincided with states imposing new barriers to enrollment in Medicaid such as work requirements, premiums and additional verification paperwork.

This year, President Joe Biden’s American Rescue Plan expanded subsidies to help people buy health insurance on the ACA marketplace and gave that financial help not only to low-income Americans but also to those above 400% of the poverty level who previously weren’t eligible for subsidies. He also had the Centers for Medicare and Medicaid Services (CMS), the federal agency that oversees many government health care programs, open a special enrollment period so that people can sign up for coverage with those new subsidies until Aug. 15.

Now 66.8% of uninsured adults with disabilities—532,000 people in total—are eligible for health insurance plans that won’t cost them anything in premiums due to the American Rescue Plan subsidies, according to the HHS report. That’s an increase of 16.8 percentage points from the people with disabilities who were eligible for premium-free plans previously.

“CMS is committed to helping people with disabilities get the health insurance coverage they need and deserve,” Chiquita Brooks-LaSure, the agency’s administrator, said in a statement. She said anyone who still needs coverage should sign up for a plan before Aug. 15.

This assistance only lasts until 2022, so the Biden Administration and Congress will have to decide whether to make the expanded subsidies permanent—something Democrats are considering as part of the budget reconciliation package they are trying to pass this summer.

While the pandemic is in a better place than it was a year ago, as the delta variant spreads, the CDC has warned that the COVID-19 vaccines may not be effective for immunocompromised people, leaving many people with disabilities feeling even more vulnerable.

On the 31st anniversary of the Americans With Disabilities Act on July 26, Biden announced that those suffering long-term effects from COVID-19 may qualify as disabled under federal civil rights law.

“We are bringing agencies together to make sure Americans with long Covid, who have a disability, have access to the rights and resources that are due under disability law,” he said. Biden spoke about how far the disability rights movement has come, but acknowledged that there remain many areas of American life that are still not fully accessible to disabled people. “We made important progress,” he said, “but we still have work to do.” 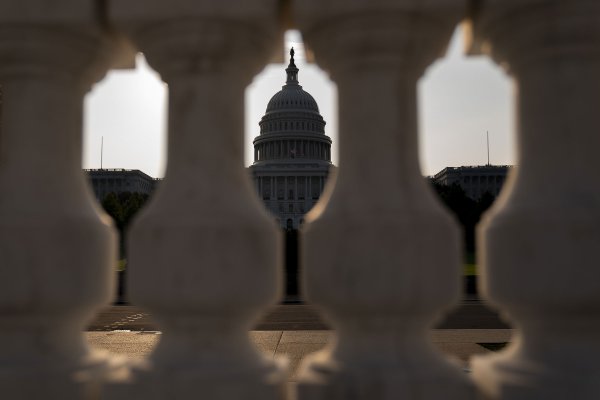 Crypto Tax: How Congress Wants to Pay for Your New Roads
Next Up: Editor's Pick