‘The Ripple Effect Is a Major Concern.’ Chicagoans Worry About the Aftermath of Lollapalooza as the Delta Variant Surges

Fans at the first day of Lollapalooza 2021 in Chicago.
Michael Hickey—Getty Images
By Andrew R. Chow

When music fan Noah Zelinsky bought tickets to the Chicago music festival Lollapalooza in May, he thought it might signal something of a return to normalcy after more than a year of isolation. “There’s so much pent up excitement, being the first major thing back,” he says. But a lot can change in two months. “Now, there’s a lot of fear countering that.”

This weekend, thousands of Lollapalooza attendees swept into Grant Park in the midst of a spike in the highly contagious Delta variant of the coronavirus. Leading up to the festival, Chicago’s COVID-19 daily case rate was quintuple what it was a month ago, albeit nowhere near the heights of this spring. Recent music festivals, including the Verknipt festival in Utrecht, Netherlands, and Rolling Loud in Miami, have been connected to outbreaks among their attendees and surrounding communities. And videos from the weekend showed festival workers at the gates barely looking at vaccination cards, packed crowds with few masks in sight, and kids rushing into the festival grounds completely unsupervised.

Whether or not Lollapalooza, which ran from July 29 through Aug. 1, held COVID-19 at bay could make the festival a tipping point in whether or not the country’s triumphant reopening continues as planned throughout the summer and fall. “I think it has the makings [of a superspreader event],” Theresa Chapple-McGruder, a Chicago area maternal and child health epidemiologist, told TIME. “When we’re in a place where rates are rising, we need to put prevention strategies in place. I don’t see how a large festival like this could meet that criteria of slowing the spread.”

Relaxed safety requirements in the face of rising cases

Lollapalooza has been a Chicago institution for 15 years, regularly drawing 100,000 people each day of the typically four-day event. This year, the lineup included Miley Cyrus, Tyler the Creator and the Foo Fighters, and marked the first major cross-genre festival to return to the U.S. since the pandemic’s start. Lollapalooza’s parent company, Live Nation, worked closely with public officials, including Chicago Department of Public Health Commissioner Dr. Allison Arwady, to implement safety guidelines, including a system to check if attendees have valid COVID-19 vaccine cards, vaccine records or negative tests upon entering, and to advocate that everyone wear masks while on festival grounds.

“It’s outdoors. We’ve been having large-scale events all over the city since June without major problems or issues,” Chicago Mayor Lori Lightfoot said in a press conference last week. On Thursday, the first day of the festival, organizers said that 90% of attendees have showed proof of vaccination, with 600 people turned away for lack of paperwork.

However, in the two months since the festival was reannounced in May—when full weekend passes rapidly sold out, perhaps in part because the event was canceled last year—the Delta variant has spread rapidly throughout the U.S., accounting for 83% of new COVID-19 cases, the U.S. Centers for Disease Control and Prevention said in late July, with most clustered in unvaccinated populations. The number of new cases reported daily in Chicago had dropped to as low as 34 in late June, but is now back up to 206 a day, although hospitalizations remain drastically lower than their peak this spring. (Hospitalizations typically lag behind increases in case rates.)

Even as cases continued to rise, Lollapalooza relaxed its requirements for unvaccinated attendees. While Lightfoot had said in May that festivalgoers needed to show a negative COVID-19 test taken 24 hours or less before entering, that number was increased to 72 hours, allowing a much longer window to theoretically contract the virus before the festival. Earlier this month, the Verknipt festival in the Netherlands admitted unvaccinated attendees as long as they had a negative test taken within 40 hours of entering. The festival was later linked to 1,000 COVID-19 cases among its 20,000 attendees, and Lennart van Trigt, a representative of the Utrecht health board, admitted that the event’s policies were misguided. “In 40 hours people can do a lot of things, like visiting friends and going to bars and clubs,” Van Trigt said. COVID-19 tests also aren’t 100% accurate and can be easily faked—and there is a lag between when people contract the virus and when they might return a positive test.

Not all recent similar events have suffered from outbreaks. The Exit Festival, an electronic music festival in Serbia which welcomed some 45,000 people a day, recorded zero infections according to a study published a week afterward. Serbia has had relatively low COVID-19 rates, but festival organizers told Billboard that more than half of its attendees were foreign visitors; their monitored sample of festival guests was tested for COVID-19 both when entering the gates and a week later.

On the other hand, there have been reports of numerous COVID-19 cases connected to the hip-hop festival Rolling Loud in Miami two weekends ago. Tens of thousands of people showed up daily to the festival, which did not require masks, vaccinations or negative tests. Last week, the rapper Dess Dior and the actor Alexa Leighton, among others, announced on social media that they had tested positive for COVID-19. Their infections coincided with a larger spike in Florida at large, in which COVID-19 cases and hospitalizations have risen dramatically.

Critics of Lollapalooza are worried that the festival spread COVID-19 in two dimensions: first in the Chicago area, and second, everywhere people travel back to after the weekend ended. Lollapalooza is a commuter festival—set in the middle of downtown Chicago, with many festivalgoers arriving by public transit from other parts of the metropolis. This weekend, buses and trains on the Chicago Transit Authority (CTA) were jam-packed with a mix of unvaccinated festivalgoers and essential workers returning to in-person work, every day of the festival. “Many people who rely on using public transportation are essential workers who don’t have remote accommodations—and there’s going to be a domino effect, where they’re going to be on the same CTA car or [in the same] bars and restaurants as all these people coming in from outside the city,” says Elena Gormley, an organizer for Social Service Workers United-Chicago.

If the festival turns out to be a superspreading event, there could be significant trickle-down effects. Mayor Lightfoot told the New York Times’ Kara Swisher that if Chicago’s daily case rate jumps over 200, she would consider reimplementing a mask mandate as well as other measures. Jim DeRogatis, a longtime prominent Chicago music journalist, told the Washington Post that the impact of another shutdown on Chicago’s independent venues could be catastrophic. “If infections start again in a serious way and the city has to start shutting down again, I don’t see how they survive,” he said.

Others are more concerned about what happens when the festivalgoers return home to places with lower vaccination rates. (About 52% percent of Chicago’s population has been vaccinated, which is slightly higher than the national average.) Chicago health officials just added nine states to the city’s travel advisory—including nearby states like Missouri, Arkansas and Tennessee—which encourages unvaccinated travelers from those states to either obtain a negative test or quarantine. But it will be difficult for health officials to track those people if they arrive and leave by car. “We don’t even have to look as far as neighboring states: I think it’s going to be an issue with neighboring counties and cities to Chicago,” Dr. Chapple-McGruder says. “The ripple effect is a major concern for me.”

On the subreddit r/Lollapalooza, a conversation emerged last week about COVID-19, with some expressing concerns and others readily dismissing them. “If I get it, I get it. I’m gonna enjoy this weekend. Been waiting a fat minute for a someone [sic] normal summer,” wrote one commenter.

Noah Zelinsky, who is 21 and from Chicago, attended the festival with his friend Savanna Savoy, 18, who drove down from Minnesota to attend. Speaking to TIME before the festival, they said they had friends flying into Chicago for the festival from across the east coast, and that they were both vaccinated and eager to return to live music—a once-essential aspect of their lives—despite the widespread consternation about the festival they saw online. “Now that there’s an opportunity to go out, it shouldn’t be an issue for those who are vaccinated, since we’re the ones who were staying home for so long,” Savoy says.

Savoy and Zelinsky said they planned to wear their masks for most of the outdoors festival, while acknowledging the organizers’ guidance to stay 6 feet away from people was likely impossible. (Images from the weekend all but confirmed this.) They also planned to go to some of the festival’s afterparty concerts, which took place indoors. “We’re putting a lot of hope in the other people around us,” Zelinsky says.

Dr. Chapple-McGruder recommended that festivalgoers wear their masks outside and particularly in crowded spaces, find less-crowded places to eat and take public transit during off-peak hours. “If you live with or can’t avoid contact with high-risk individuals, maybe reconsider your attendance,” she says.

Meanwhile, nearby businesses contemplated the risk-reward ratio, with some taking the plunge into opening up to a wider, more maskless clientele for the potential economic benefits. Billy Dec, who owns the Underground nightclub less than a mile from the park, hosts all-night afterparties for Lollapalooza artists and attendees every year, and welcomed revelers back: “There are a lot of people that are really positive about what the festival is doing for the spirit of a city that this year has been really tough on,” he says. However, he says he planned to keep his club’s capacity much lower than in years past. “We’re going to be over-careful about capacity at the door,” he says. “We’re going to keep our numbers low.”

Table to Stix Ramen, in Evanston, was part of the festival’s Chow Town area. It closed for a full week prior in order to prepare for the potentially huge and hungry crowds, and brought 20 vaccinated staffers onsite as opposed to the five that regularly work in the restaurant. “Every one of my staff members is vaccinated and will be attending, with full knowledge of the risk of the delta variant,” chef and owner Kenny Chou wrote in an email before the festival. “I trust the coordinators and the Lollapalooza staff to keep everyone safe.”

After the festival, Chou wrote again, calling it a “crazy weekend.” “There were times where I felt overwhelmed, especially with the sea of people that moves between shows. We were punching out 100 plus noodles in 10 minutes,” he wrote. “It was exhausting, yet now that it is over I miss it already.” 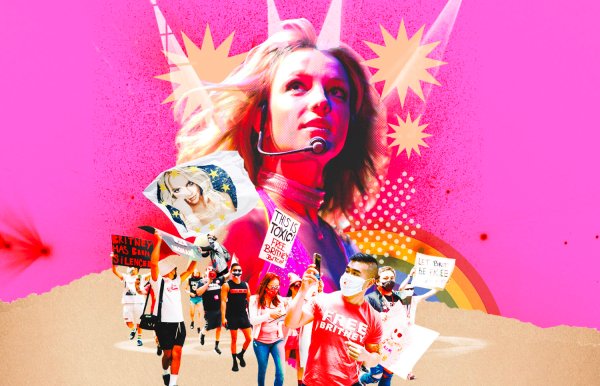 Britney Spears’ Pop Legacy Goes Way Beyond Her Music
Next Up: Editor's Pick