The double dream lives on.

The U.S. Women’s National Soccer Team (USWNT) defeated the Netherlands on penalty kicks at Yokohama International Stadium on Friday night in a thrilling quarterfinal match, keeping its hopes alive to win a World Cup and Olympic gold medal consecutively. The game ended in a 2-2 draw. Thanks largely to the expert goalkeeping of American Alyssa Naeher, who made two key stops in the penalty kick session, the U.S. won the penalties 4-2.

On the Netherlands’ first shot, Naeher dove to her right to stop Dutch scoring machine Vivanne Miedema. Rose Lavelle then fired a shot over Sari van Veenendaals’s head to give the U.S. a one-shot advantage. Dominique Janssen scored for the Netherlands; Alex Morgan matched with a goal into the right corner to give the U.S. a 2-1 lead. Stephanie van der Gragt bounced one in, barely, off the left post; Christen Press calmly put the U.S. up 3-2. Naeher then stopped Ariek Nouwen.

“You stay in the moment,” said Naeher, who also made several key saves in regulation and extra time, after the game. “You start to take it all in. Take a few deep breaths, to try to zone out everything else that’s going on”

Megan Rapinoe put in the clincher in the top right-corner. “I just try to be calm,” she said after the game. “I always say to myself, the worst that’s going to happen is you lose the whole thing. Lose the Olympics for your country.”

Rapinoe crossed her arms after ending the game, far cry from her iconic winged “look-what-I-just-did pose” from the 2019 World Cup. “There were no people!” she said by way of explanation, with a laugh. “I don’t know what I did. I don’t think it was very cool.”

For a team that has won three World Cups—including the last two in 2015 and 2019—taking titles for these two major international competitions, back-to-back, remains one last elusive on-field accomplishment. (Off the field, the team continues its legal battle for equal pay). “It’s hugely important,” forward Press told TIME about the World Cup-Olympic double in a recent interview. “The way our schedule works, we really built these two pivotal moments in a four-year cycle. And that’s the World Cup and the Olympics. Everything else is beautiful and fun and competitive. But as a U.S. Women’s National Team player, this is it.”

The Americans threatened early; a Tobin Heath goal was called offsides, and Dutch keeper van Veenendaal barely got a finger on a Lindsey Horan header; the shot went off the post. From the outset, the Americans controlled possession. The Netherlands, however, took advantage of an opportunity: in the 18th minute, off a deflection, the ball wound up on the foot of Miedema—who plays for Arsenal—in the box. She fired a spinning shot clear of Naeher to give the Netherlands a 1-0 lead. It was her ninth goal of the tournament.

The U.S. countered, with a flurry starring Lynn Williams, who’s playing in her first Olympics or World Cup. This was her first Olympic start. In the 28th minute, she fired a cross to Sam Mewis in the box; Mewis headed it in to tie it up. Three minutes later, Williams headed a ball in the middle of the box to Mewis; who jumped with Dutch defender; on the deflection, Williams, who just missed out on making the 2019 World Cup team, and was originally named an alternate to the Olympics team before the International Olympic Committee (IOC) expanded rosters from 18 to 22 earlier this month to give teams and players more relief during the pandemic, slid in between two Dutch players to rocket a shot past van Veenendaal to give the U.S. a 2-1 lead.

Not long ago, Williams thought she’d never see the field at the Olympics. Afterwards, she was asked about the energy level she brings to the field. “I think that’s what makes me special,” she said.

Williams and Mewis are teammates for the North Carolina Courage, of the National Women’s Soccer League. They also host a podcast, “Snacks with Lynn and Sam.” According to the podcast’s website, “from their professional journeys to their off-field musings, Snacks will give fans a candid look into the lives of two athletes in the prime of their careers.”

In the 54th minute, however, Miedema struck again. She dribbled to her right, clear of Abby Dahlkemper, to knot things up at 2-2, her 10th goal of the Olympics. A sweet Horan cross to Press, who was subbed in the second half, was called in the 63rd minute was called offside; after a Video Assist Review (VAR) confirmed the close call.

But in the 81st minute, Naeher stopped a Lieke Martens a penalty shot to keep the game tied. And in the second half of extra time, she blocked Miedema from point-blank range. Miedema wouldn’t get her 11th goal; Naeher also stopped Meidema to start the penalty session, easing the pressure on the U.S. shooters. “That just made it so easy for us,” says Rapinoe. “She’s been huge.”

Offsides penalties almost cost the USWNT; the team needs to stop making so many mistakes the rest of the way. Press was also called offsides on a score in the second half of extra time, as was Morgan. For the tournament, nine U.S. goals were called off because of offsides penalties, including four alone in the quarterfinal.

The USWNT answered Olympic doubters. Coming into the quarterfinal, many observers worried about the Americans’ chances, given their dispiriting performance in pool play. In the first game of the Olympic tournament, Sweden crushed the USWNT, 3-0, handing the women their worst loss since the semifinals of the 2007 World Cup (in that game, Brazil defeated the U.S. 4-0). The U.S. rebounded against New Zealand, winning comfortably 6-1, before settling for a scoreless draw in its final preliminary round game against Australia. Coming into the quarterfinal, the Netherlands—whom the United States had defeated in the 2019 World Cup final—had scored 21 goals in pool play; in two of the three games, the U.S. failed to score. Would the U.S. to again collapse at the Olympics, in the wake of a World Cup win (in Rio, Sweden beat the U.S., on penalty kicks, in the quarterfinal)?

“Oh, you guys aren’t surprised, come on,” Rapinoe said to reporters following the victory, when asked about the U.S. response in the quarterfinal. “It’s the knockout round. You either get on a flight tomorrow, or drive to Kashina.” The United States takes on Canada in the semifinal on Monday, Aug. 2, at 5 p.m. Japan time, (4 a.m. EST), in Kashima.

After fighting off the Netherland in a nail-biter, the U.S. seemed to regain its verve.

“This team just never really quits,” says Rapinoe. “Whether we’re playing like s–t, or playing great or playing in the middle. We’re still going to go out there and play as hard as we can.”

Until further notice, the world champion USWNT is still the team to beat. 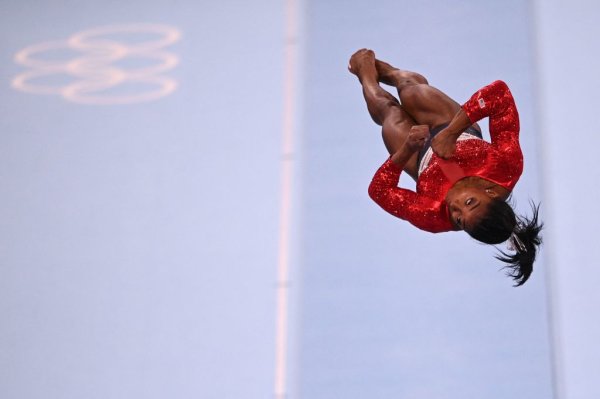 Here's Why the Twisties Are so Dangerous for Gymnasts
Next Up: Editor's Pick