While the country’s struggle with COVID-19 goes on, many of America’s largest tech companies announced enormous quarterly earnings this week. The tech sector’s continued mid-pandemic financial windfall runs counter to many small businesses, which continue face challenges amid a tumultuous financial recovery.

On Tuesday, Apple reported that it earned $21.7 billion in the last three months that ended on July 26, almost doubling the $11.2 billion it earned in the same period last year. The Cupertino company says it made almost $40 billion from selling iPhones over the last quarter, compared with $26.4 billion last year. Over three months that ended on June 30, Microsoft reported an earned net income of $16.5 billion on Tuesday, almost a 50% increase over the same time last year when it reported $11.2 billion.

Also on Tuesday, Alphabet, Google’s parent company, reported a staggering 166% net income increase over the previous year’s earnings. Alphabet reported a net income of $18.5 billion for the three months ending on June 30, compared with $6.96 billion earned during the same time frame in 2020.

On Wednesday, Facebook said it doubled its quarterly net income, reporting $10.3 billion for the three months ending on June 30, compared with earning a net income of $5.2 billion during the same period in 2020.

Tesla reported a dramatic increase in its quarterly total gross profit on Monday, saying it earned $2.9 billion in its second quarter, compared with $1.3 billion over the same period last year, marking a 128% increase.

Amazon did not prove an exception to its peers, continuing its record-breaking growth over the course of the pandemic. On July 29, it reported a 50% increase in its quarterly net income, earning $7.8 billion over three months ending on June 30. It reported $5.2 billion in net income for the same period in 2020.

The strong earnings from big tech coincide with the U.S. Commerce Department reporting Wednesday that the country’s gross domestic product has rebounded from the massive blow dealt to it by the pandemic. However, the earnings also come as inflation worries swirl, jobless claims remain high and economic inequality reportedly continues to worsen.

Small businesses continue to face an uncertain path towards a full recovery to pre-pandemic norms, creating a striking contrast between these enormous tech earnings. A report released this spring by economists at the Federal Reserve found that about 120,000 additional small businesses had closed in the first year of the pandemic. And the Fed’s Small Business Credit Survey, released in February, found that 64% of small business would apply for further government assistance, and 39% of those owners thought their businesses would fail without it, unless business could return to 2019 levels.

Currently, the largest challenge for small businesses appears to be a stark labor shortage. A survey from the National Federation of Independent Businesses, released in March, found that 42% of business owners had job openings they were unable to fill.

Additionally, the current housing crisis and increased housing costs in some places, have left many small business owners unable to make rent. According to an April report released from Small Business Majority, “nearly half (46%) of businesses with under $100,000 in revenue with commercial space are one or more months behind on rent, compared to 36% of larger firms.”

Though high-flying tech earnings appear poised to continue, many company leaders in their earnings calls showed concern on how the lasting impacts of COVID-19, and the rampaging Delta variant, might disrupt future supply chains and earning expectations.

“[A]s the last 18-months had demonstrated many times before, progress made is not progress guaranteed,” Apple CEO Tim Cook said on the company’s July 27 earnings call. “An uneven recovery to the pandemic and a Delta variant surging in many countries around the world have shown us once again, that the road to recovery will be a winding one.”

Still, as is their wont, tech leaders took the opportunity in earnings calls to paint a bright picture of the role of tech and how innovation will continue to enhance our lives. And Facebook CEO Mark Zuckerberg was eager to invoke the newest tech buzzword in search of a consistent meaning: “metaverse.”

“So what is the metaverse? It’s a virtual environment… And we believe that this is going to be the successor to the mobile Internet,” Zuckerberg said Wednesday on Facebook’s earnings call. “You’re going to be able to access the metaverse from all different devices and different levels of fidelity from apps on phones and PCs to immersive virtual and augmented reality devices… The defining quality of the metaverse is presence, which is this feeling that you’re really there with another person or in another place.”

As income inequality widens across the country, it widens in its economic landscape as well. Big tech companies seem to be raised upon a steadily rising tide. One that’s failing to lift a lot of other boats. 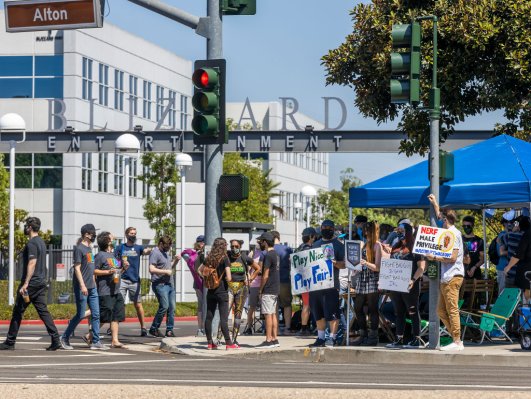 Activision Blizzard Harassment Lawsuit: What to Know
Next Up: Editor's Pick