Police tape lines a crime scene after a shooting at a backyard party on September 19, 2020, in Rochester, New York.
Joshua Rashaad McFadden—Getty Images
By Josiah Bates

In the midst of nationwide calls to move away from age-old police tactics towards incorporating more community-led responses to gun violence, one U.S. Attorney’s decision to form a task force—with the goal of taking “proactive” measures to address gun violence in two cities in New York—has drawn criticism from local residents.

James P. Kennedy Jr., U.S. Attorney for the Western District of New York, announced the formation of the Violence Prevention and Elimination Response (VIPER) task force on July 7, intended to combat a recent surge of gun violence in Rochester and Buffalo, NY. Combining the work of city, state and federal agencies, VIPER’s focus is to get high-level and well-known gun offenders off the cities’ streets, Kennedy said.

Similar federal-led initiatives are rolling out across other cities in the country. Last week, the Department of Justice launched a series of firearms trafficking strike forces in “five key market regions,” including New York, Chicago and Los Angeles, to tackle potential sources of gun crimes.

So far this year, 40 people have been killed in Rochester, and the city is on pace to have its highest murder rate in history. (In 2020 52 people were killed). As of Tuesday, July 28, however, the city has gone 13 straight days without a homicide.

Buffalo has also recorded over 40 homicides as well this year, and is on track to eclipse the 65 murders that occurred last year.

On July 23, the task force released statistics from its first two weeks’ work: 138 arrests. 45 of those arrests were narcotics-related, 45 were firearm-related and 38 were violent felony arrests. The task force has also seized 22 weapons. (15 of the arrested people now face federal prosecutions, while another 21 individuals’ arrests are under review.)

“All residents in both Rochester and Buffalo deserve, and are entitled, to feel safe in their own homes,” Kennedy said in a July 23 press statement. “The tremendous coordination between federal, state, and local law enforcement combined with the outstanding cooperation we have received from the community have combined thus far to produce some pretty remarkable results.”

However, some community members speaking with TIME paint a different picture, with concerns that the task force appears designed to implement strategies similar to those seen during the height of the mass incarceration era in the 1990s.

“In this day and age with so many studies, so many evidenced-based resources surrounding violence interruption and strategies to reduce violence, it’s crazy to see folks that do not live in our community take it upon themselves to call in the [federal government] to criminalize us,” Stanley Martin, an activist who co-founded Free the People ROC and works with VOCAL-NY, tells TIME.

On Tuesday, VIPER officials, along with Kennedy and District Attorney Sandra Doorley, held a public meeting to discuss the violence in Rochester. Many who attended the meeting expressed concerns, particularly around the fact that the task force was formed without any input from community groups or leaders.

“There is no one [from] the Black community that is part of this task force,” says Shalonda Jones, an activist with the Community Justice Initiative who attended the meeting, says. Jones tells TIME she and others felt the meeting was insincere. “They don’t give us the vibe that they are here to help. They want us to snitch,” Jones says. They’re not offering us any resources.”

The Western District U.S. Attorney’s office did not respond prior to the initial publication of this article but on Aug. 3, Kennedy provided the following statement:

To many Rochester and Buffalo residents, the punitive mentality overlooks the need for investment—whether in educational programs, youth programs, job training, or countless other kinds of programs which are viewed as preventing or curtailing pipelines to criminal behavior—and greater cooperation between the community and the police, federal or otherwise.

Read more: ‘I’m Going to Make a Change.’ Police Departments Struggle to Recruit Black Cops, So This HBCU Came Up With a Plan

Perhaps ironically, Rochester has also responded to calls to lessen police responsibilities with action. Earlier this year, the city launched a 24/7 Person in Crisis (PIC) team to respond to mental health calls in the city and, within months of its launch, doubled the pilot team’s size due to demand. As of May 31, 2021, the PIC team responded to a total of 1,774 calls.

Activists and community members say this is a step in the right direction, but that the city’s leadership hasn’t shown enough commitment to such initiatives.

“All we want to do is really have a seat at the table and be a part of the discussion,” Antonia Wynter, another activist with the Community Justice Initiative says. “If law enforcement’s goal is to bring people to justice that’s fine, but our goal [as community leaders] is to find the root causes as to why crime is happening. We can come in and work together.” 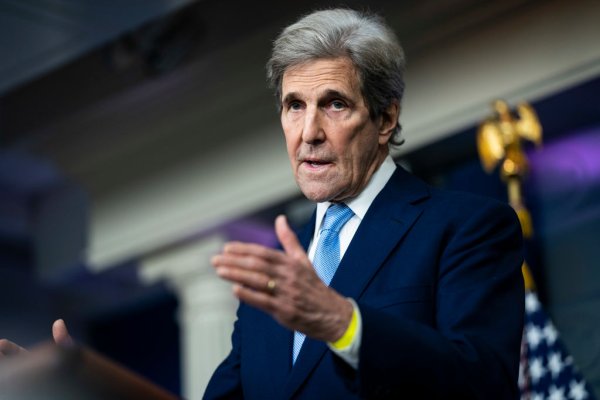 John Kerry on Border Carbon Tax: The U.S. Doesn't Want to Push Others Away
Next Up: Editor's Pick