Carissa Moore of Team USA won the gold medal during the women's surfing final at the Tsurigasaki Surfing Beach, in Chiba, on July 27, 2021 during the Tokyo 2020 Olympic Games.
Yuki Iwamura–AFP/Getty Images
By Sean Gregory/Ichinomiya

Moore, the four-time world champion and top-ranked women’s surfer in the world, defeated Bianca Buitendag of South Africa in the finals of the women’s Olympic surfing competition at the Tsurigasaki Surfing Beach, two hours east of Tokyo, on Tuesday to win the first-ever women’s Olympic surfing gold medal. (Brazil’s Italo Ferreira won the men’s event). With tropical storm Nepartak expected to bring strong winds and heavy rains that could impact an already unpredictable sport—waves have minds of their own— organizers decided to hold the final round on Tuesday before the storm hits the Japanese coast.

The final took place under threatening clouds, but conditions held up. After a while, even a rainbow appeared on the horizon, a fitting tribute to Moore, who hails from Hawaii. In the Olympic surfing final, competitors essentially alternated riding waves over a 35-minute heat; one surfer is given priority on a wave, though an opponent is free to ride it if the surfer with priority chooses not to. A surfer’s two highest-scoring waves—each is scored on a scale of 1-10—are combined for an overall total; judges evaluate performance based on criteria like innovative and progressive maneuvers, variety, and speed, power and flow.

But you didn’t need much judging to know Moore dominated the final. Sometimes the naked eye can see gold. She won by a score 14.93-8.46; for each of her big scoring waves— a 7.60 and 7.33 —she glided and twisted and turned above the crest. Buitendag kept falling and scored no higher than a 5.23.

Read more: 48 Athletes to Watch at the Tokyo Olympics

“The ocean has changed my life,” says Moore, 28. “I can’t imagine my life without it. I’ll be surfing until I’m in the ground. Riding a wave makes you feel free. It makes you feel present and it makes you, I think, feel more in love with the ocean and yourself.”

After time expired, Moore put her hands to her face in disbelief. She rode a celebratory wave, surfing’s version of a victory lap. She fell into the foam, knowing she had it won.

Moore leads a true golden moment for women’s surfing. The sport has proved a progressive leader on the issue of equal pay in sports; in September 2018, the WSL announced it would offer the same prize money to women and men on tour. In Moore’s rookie year, in 2010, the men’s world champion earned a $100,000 bonus and the women’s champ took home $30,000. But thanks to that policy, both the men’s and women’s winners of the 2021 WSL finals will receive $200,000.

Read more: Your Guide to New and Returning Sports at the Tokyo Olympics

Throughout Moore’s storied surfing career—she missed her prom to compete in a pro event—she’s pushed limits of what female surfers can do. During an event in Australia in April, for example, she landed the biggest aerial maneuver of her career; her board rose over the wave as she twisted it and grabbed it with her left hand before landing cleanly in the water. The air reverse, which went viral, earned her a score of 9.9 out of 10.

“For me, the fight was in the water,” Moore told TIME about equal pay in surfing before the Olympics. “I was trying to prove that we deserved to be on that level.”

As Moore and Buitendag paddled out to start the final, the public address announcer described Moore as an “inspiration to millions of surfers around the world, especially the young women.” This morning Buitendag, the silver medalist, said she glanced at Moore’s resume, spotting all her accomplishments—such as the world championships (she’s won in 2011, 2013, 2015, 2019) and her distinction as the youngest world title-holder ever. “She’s the most significant female surfer in the world,” said Buitendag afterwards, “and has the most impact.”

Coming into the competition, some surfers had worried that the waves could be too small to ride in Chiba, the prefecture where the Olympic competition was held. The tropical storm took care of that concern. The Tsurigaski Surfing Beach venue offered a welcome respite from the humid Olympic bubble within the borders of Tokyo. What the beach lacked in spectators, still not allowed under COVID-19 restrictions, it made up for in a cool breeze.

Despite the favorable surfing conditions, not every wave felt like a winner. “It’s really tricky,” Moore said ahead of the final. “I think with the incoming tide, it’s kind of brought more surf in so there’s more waves to .. kind of look at, it’s not very clear, oh that’s a good one. Or it isn’t. So it’s tough.”

She handled the challenge, but not without stress: Moore barely squeezed by Japan’s Amuro Tsuzuki in the semifinals, 8.33-7.43. Moore said that her father, Chris, usually builds “little rock statues” while watching her competitions back in Hawaii, to calm his nerves. He first took Moore surfing when she was five years old. “My husband sent me a photo, he was building like rock stairs in the backyard.”

In the three-plus hours between the semifinal and final, Moore said she took a shower, grabbed a bite, and over Facetime “had a little dance party,” with her husband, Luke, back home in Hawaii. But a real moment of self-doubt crept in, about 20 minutes before the start of the final, she called Luke and one of her coaches.

“I don’t think that self-doubt voice ever goes away,” says Moore. “It’s just learning how to tell her ‘hey, just be quiet for a little bit.’”

Her strategy worked. After the victory ceremony, gold medal dangling from her neck, Moore shared a hug with the press rep for the U.S. team. “It’s so heavy,” she said, holding her sport’s first-ever Olympic medal for a woman in her hand. “I still feel like I’m dreaming.”

– with reporting by Amy Gunia/Hong Kong 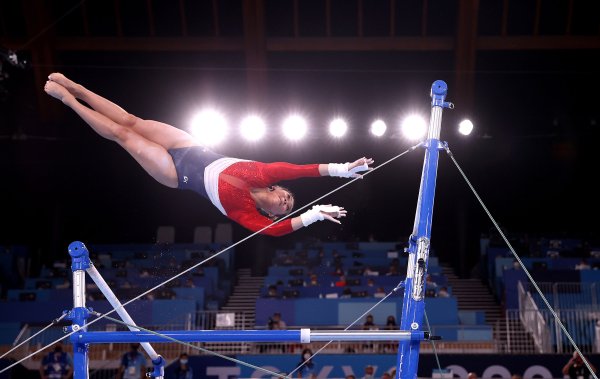 The Story Behind Team USA Women’s Gymnasts’ Leotards
Next Up: Editor's Pick