The Green Knight Is an Extravagant Unicorn Tapestry of a Movie

In a guttural growl, as if possessed by a demon, a medieval queen reads aloud a threatening letter that has just been delivered by a gargantuan bark-covered warrior on an equally imposing steed. She faints as she reaches the letter’s final line; the paper drops to the floor and bursts into flames. Cinema! There’s nothing more ridiculous, or more awesome.

There is no lettre flambée, specifically, in the late 14th century poem Sir Gawain and the Green Knight. But it’s part of the embroidery writer-director David Lowery uses to fill out his extravagant unicorn tapestry of a movie, The Green Knight, a detail that makes this ambitious adaptation feel both lived-in and magickal, with all the self-aware grandiosity that superfluous ancient k implies.

Dev Patel stars as the aimless yet mildly arrogant young knight-to-be Gawain, who, as the movie opens, still lives with his mother (Sarita Choudhury) and isn’t quite sure how he feels about his adoring girlfriend (Alicia Vikander), a no-nonsense tomboy seductress in a pixie cut. He is also, though, a nephew of King Arthur (Sean Harris). And so when the king’s Christmas revels are interrupted by that foreboding, mystical tree-man on horseback (Ralph Ineson), Gawain is there at his uncle’s side, ready to prove his worth. In the letter that makes Queen Guinevere (Kate Dickie) faint, the Green Knight—a disgruntled emissary of the natural world, bearing a holly branch in one hand and a murder-ready ax in the other—proposes a game: he invites one of the king’s knights to lop off his head. But in a year’s time, that knight must seek him out and unflinchingly accept the same blow in return.

Gawain accepts the challenge with aplomb. The big green one then scoops up his severed head, remounts his snorting horse and thunders off, reminding the young knight of their date one year hence. The rest of The Green Knight details Gawain’s quest, a test of his honesty and virtue, whose penultimate stop is a grand castle presided over by a gregarious nobleman (Joel Edgerton) and his beguiling wife, who just happens to be the spitting image of Gawain’s girlfriend back home (Vikander again, this time decked in flowing silks and fab jewels). A blindfolded crone hovers nearby every minute; what’s her deal? Gawain is about to find out.

This movie’s source material was written by an unknown poet, circa 1400. Lowery (A Ghost Story, The Old Man & the Gun), in addition to fleshing out the story, puts his stamp all over it so confidently that the results could be annoying, if they weren’t so enchanting. His view of medieval England, by way of locations in Ireland, is a vision of verdant ivy and glowering cloud cover, of skeleton-littered battlefields and chambers brushed with torchlight. Lowery has cited Tarkovsky’s Andrei Rublev and Kenneth Branagh’s Henry V as inspirations; the film also hints at John Boorman’s Arthurian extravaganza Excalibur and Guillermo del Toro’s sylvan fantasy Pan’s Labyrinth. What Lowery ends up with is a little Led Zeppelin, a little Fairport Convention.

Patel’s job here is to play a youth figuring himself out even as he yearns for recognition and status, and in general, he may be better at channeling exuberance than at teasing out ghost threads of introspection. Even so, he makes a fine Gawain, largely on the strength of his face, its planes defined by a manicured beard, ruminative eyes, overgrown-forest eyebrows. It’s the face of a hapless saint, lifted from a Byzantine icon, who doesn’t know what to do with his fame. And that’s Gawain, heroic in the end, but only just barely. He’s a knight by the skin of his teeth in a movie that’s both of its time and splendidly out of step with it, an act of necromancy in a CGI world. 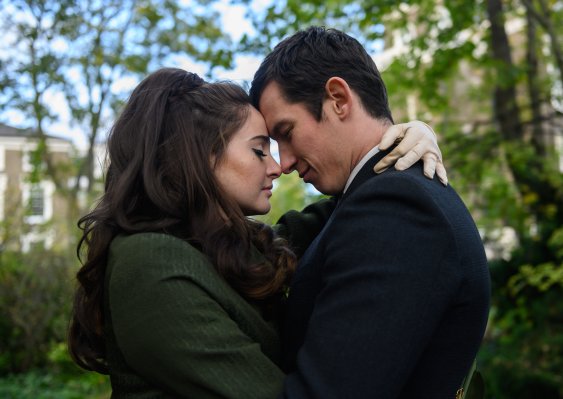 A Primer on The Last Letter From Your Lover
Next Up: Editor's Pick