Inside the SpaceX Crew Dragon: Here's How the Inspiration4 Crew Will Fly to Space

Here’s how you fly a SpaceX Crew Dragon spacecraft: Climb aboard; strap yourself in; close the hatch; fly to space. The Dragon takes care of everything, so relax and enjoy the ride—unless, of course, something goes wrong, and in space, something can always go wrong.

So here’s how you prepare for that possibility: Spend months of 60-hour weeks in classrooms and simulators; master hundreds of pages of technical specs and procedures; learn the workings of dozens of systems and subsystems aboard the spacecraft; train for emergencies ranging from communications blackouts to navigation failures to on-board fires; and, not for nothing, spend a little time in a centrifuge and an altitude chamber, practicing for the g-forces you’re going to have to endure and the possibility of depressurization.

“There’s north of 60 procedures that range from normal contingency to emergency,” says Jared Isaacman, the CEO of Shift4 Payments, an online payment service, who will be commanding the Inspiration4 mission in September, spending three days in orbit with three other civilian astronauts. “In a multi-day mission there is a lot of time for a lot of things to go wrong.

Practicing for those eventualities aboard a Dragon requires a whole new kind of training, because by any measure, the new ship is not your daddy’s spacecraft. NASA’s old Mercury, Gemini and Apollo capsules were very much designed with an airplane cockpit in mind. Their sheet metal instrument panels were studded with hundreds of switches, dials, lights and analog gauges. Their simple on-board computers were controlled by a mechanical keyboard. The commander flew those ships the same way you’d fly a plane—with a control stick determining velocity, attitude, altitude and direction.

The Dragon’s designers swept all of that away, replacing everything—including the control stick—with three large touch screens facing four side-by-side seats. Each screen is capable of calling up as many as 10 sets of displays, allowing the crew to focus on a particular set of systems—guidance, environmental, electrical, and more.

“You have an overall systems page on the screen, and then you can drill down into individual pages as well,” says Doug Hurley, the commander of the first crewed SpaceX mission, which launched in May of 2020. “There’s a total of 25 to 30 individual pages, and SpaceX may have added some more since my flight. With any aircraft or spacecraft, you always iterate because it makes sense and it’s easy and will help the crew.”

The seats in the Crew Dragon spacecraft are reconfigurable, allowing it to carry up to seven people—though four is typical for a NASA mission. Three large touchscreens replace the traditional instrument panel.
Courtesy SpaceX

Ideally, the spacecraft helps the astronauts so much that they have virtually nothing to do, with the ship operating entirely autonomously. “And if the automation doesn’t take care of a problem, then the ground is your next layer of defense,” says Hurley, referencing SpaceX ground controllers who can problem-solve and issue commands to the spacecraft from the comfort of mission control. Only if the Dragon fails to look after itself and the ground staffers can’t solve the problem would the astronauts take over.

That’s the case too when it comes to the most critical aspect of commanding the spacecraft: flying it. The Dragon features a full-time autopilot program, requiring no astronaut intervention. On Hurley’s flight, he took over in the final stages of the spacecraft’s approach to the International Space Station, steering the ship in all axes, flying above, below and to the left and right of the station. But the purpose of that exercise was just to prove that the manual systems worked.

“In space you’ve got to trust and verify,” Hurley says. “​​But there’s no plans to do any more manual flying, unless there’s a need for it from a systems failure kind of scenario.”

Those failures do occur, and learning to fly the Dragon by hand can take some doing. Stripping out the control stick and replacing it with buttons on a touch screen may make for a more elegant spacecraft, but it also eliminates the most important physical connection a pilot has to their vehicle. Pilots using a stick never have to look at it because they operate by feel, but that’s impossible with a touch screen that offers nothing by way of tactile response. “When you’re flying off soft keys on a touch screen it’s a totally different feel, and a lot of muscle memory is lost,” says Isaacman, who is a licensed jet pilot and knows a thing or two about stick-and-rudder skills. “​​There is that delay when you look at the screen and input a command before it’s executed, versus something instantaneous when you move the stick.”

The Crew Dragon spacecraft before being mated to its Falcon 9 rocket (left); the Falcon's second stage is disposable, and the first stage returns to Earth, landing on a barge, to be refitted and reused.
Courtesy SpaceX/NASA

Then too, there are the kinds of emergencies that not only require on-site human intervention, but require it to be executed immediately—and perfectly. Fires can and do break out aboard spacecraft; crew members on Russia’s Mir space station had to battle a blaze in 1997 when a fuel canister ignited. The biggest risk aboard Dragon is a fire caused by a battery overheating, and there are a lot of batteries aboard the ship—not only the spacecraft’s own, but those that power the tablets, cameras and smartphones the crew members will carry.

There is also the risk of a spacecraft depressurization, requiring the crew to look for the breach, try to seal it off and scramble into their suits at the same time. A launch emergency may happen too—if, say, the second stage of the Falcon 9 rocket that carries the ship to space fails to separate from the Dragon and the commander has to manually execute the separation maneuver. The Dragon’s guidance system is also subject to failure, potentially causing the ship’s solar panels to slip out of alignment with the sun and requiring human intervention to set things right.

Finally, there are the overall risks raised by the simple number of days the Inspiration4 crew will spend in orbit. Crews heading for the space station fly there directly and are usually aboard within a day or so of launching. The Inspiration4 crew will be in orbit for three days, flying independently, without the security the giant station provides—the longest a U.S. space a U.S. crew has been aloft in a vehicle other than the station since the last shuttle stood down in 2011. Every day spent on their own is another day during which something can go wrong.

The Crew Dragon spacecraft and the Falcon 9 rocket a few days before the launch of Crew-1 Mission in Nov. 2020.
Courtesy SpaceX

Ideally, nothing goes wrong on any given mission—and on the three crewed flights SpaceX’s Crew Dragon has flown so far, the ideal has been the real. But space remains, ever and always, a dangerous place to go. It’s for the Dragon designers to remove the risk—and even the work—from the equation. It’s for the crew to be prepared if that equation does not add up.

“I don’t know that there’s ever been a human spaceflight mission that did not have some anomaly,” says Isaacman. “People are telling us we’re making good progress. I think we’ve definitely arrived at the point where we’re ready and this is going to be a well-executed mission.”

Read More About the Inspiration4 Mission: 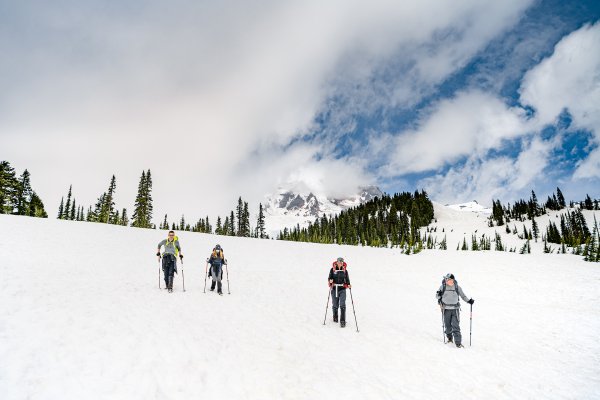 How the Inspiration4 Crew Trained to Go to Space
Next Up: Editor's Pick