There was probably little doubt that when the U.S. women’s gymnastics team walked into the arena at the Tokyo Olympics for the team event, their leotards would embody some red, white and blue theme. And the women did not disappoint.

Striding on to the mats, the four-woman team event squad resembled patriotic superheroes in their red-sleeved leotards with a white band across the chest and blue bottom. And that was the idea.

Jeanne Diaz, senior designer and director of custom at GK Elite, the leotard manufacturer that for the first time made the women’s Olympic uniforms, says the theme for the leotards was Modern Warrior. “These strong…women come onto the mat like it’s their battlefield,” says Diaz. “They are ready to go, ready to fight for these gold medals and I wanted the apparel to highlight the strength of these athletes.”

Sunisa Lee of Team United States competes in the uneven bars during the Women's Team Final of the Tokyo 2020 Olympic Games on July 27, 2021.
Laurence Griffiths—Getty Images

Altogether, GK Elite designed eight leotards for the six-member women’s team to wear during the five days of competition. As part of the Modern Warrior theme, the designs also reflected three additional concepts—patriotism, dynasty and fearlessness. The team leotard was meant to evoke the feeling of patriotism that comes from wrapping the American flag around the athletes, and is adorned with more than 7,600 Swarovski crystals scattered across the front, back and along the sleeves. “Under the arena lights these leotards are going to really light up,” says Diaz. “To the point where it will look like there’s a battery pack hidden somewhere.”

The team chose to wear another patriotism-inspired leotard during the qualification round, a navy leotard with laser-cut red stars splashed over the entire body and sleeves. This design “is supposed to represent fireworks, the Fourth of July and a whole smorgasbord of Americana.”

Read More: The U.S. Women’s Gymnastics Team Is Still the Favorite in Tokyo. But There’s Little Room for Error

Over the remainder of the competition, the U.S. women’s team will reveal the other designs that they each received in six garment bags the weekend after Olympic Trials when they learned they had earned a place on the team. Each received 20 leotards, including the eight competition ones and 12 additional ones for training. Among the uniforms you’ll see—the dynasty-inspired leotards that pay homage to the long history of U.S. Olympic champion gymnasts, from the 1996 Magnificent Seven team that won the U.S.’ first team gold, to Aly Raisman who earned two back-to-back team golds and a silver in the all-around. The uniform inspired by the 1996 team replicates the iconic red and white stripes that were prominent in that leotard, but this time on shoulders, while the deep v-shape of the front symbolizes a medal hung around the neck.

The designs representing fearlessness evoke armor, with strong lines and intricate patterns. After trying on one of these designs for the first time, Jordan Chiles admitting to feeling like a superhero.

The uniforms are much more than just apparel. While Biles did not have direct input into the Olympic leotards, she is sponsored by GK Elite and has used her leotards as a way of expressing herself over the past few years. After revealing that she is a survivor of sexual abuse by USA Gymnastics’ team doctor Larry Nassar, Biles asked GK to design a teal-colored leotard, to express her solidarity with fellow survivors s the only remaining survivor still competing. Biles wanted to remind USA Gymnastics that the survivors are still demanding accountability and transparency when it comes to the organization’s role in not protecting its athletes while Nassar was allowed to continue working with gymnasts years after the first complaint of abuse was filed.

In 2019, Biles also approached the company to recognize her dominance in the sport—with 30 Olympic and world championship medals, she’s the most decorated American gymnast of all time, and, many gymnastics analysts agree, the greatest of all time. Biles thought adding a goat icon to her training leotards would be a nice touch, and worked with Diaz’s team to come up with just the right goat symbol to represent her GOAT status. At the U.S. National Championships and Olympic Trials in 2021, Biles’ leotards included a small icon of a goat’s head outlined in rhinestones. 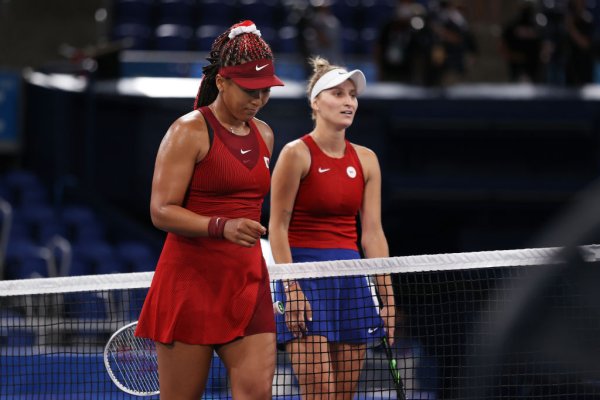 Naomi Osaka Knocked Out of Tokyo Olympics
Next Up: Editor's Pick