Countries Have 100 Days Before a Landmark Climate Conference. Will They Come Together in Time?

Sitting on the sidelines of the G20 climate summit in Naples this week, it was hard not to feel a sense of existential dread. Last year, I wrote on the cover of TIME that a series of developments—beginning with the trillions spent to help the world recover from COVID-19 and ending with the UN climate conference in Glasgow this fall—had made 2020 and this year our “last, best chance” to avoid the worst effects of climate change.

Going into this week’s talks, just over 100 days before the Glasgow summit, the world seemed to be on the verge of blowing the opportunity. A report from the International Energy Agency (IEA) released just ahead of the summit showed that only 2% of the money spent by governments to recover from the COVID-19 pandemic has been allocated to support the transition to clean energy. Global headlines also created a backdrop of doom: the lead delegates—mostly climate and energy ministers from 20 of the world’s largest economies—arrived amid flooding in Europe, heatwaves in the U.S. and deluges in China.

And yet delegates showed up in Naples and repeated debates that have long hampered progress in international climate talks. Countries with significant fossil fuel economies held tight to their interests; developed countries repeated promises to support their developing counterparts without putting up the money. In the intense Naples heat, hearing this repetitive loop I’ve heard at many conferences before, it was hard not to envision the world’s largest economies talking us off the climate cliff.

“We’re way behind,” John Kerry, the U.S. Climate Envoy and former U.S. Secretary of State told me on the roof of his hotel in Naples as the summit was underway. “With 100 days left… it is imperative we do everything we can to make Glasgow as significant a departure point as it needs to be.”

Perhaps the delegates felt their own sense of existential dread. The talks were tense and passionate, going through the night at the city’s royal palace as negotiators debated tweaks to the conference’s official communique and ministers twisted arms to persuade their counterparts. In the end, they did yield a final result that was better than expected at the outset, though far from perfect. The G20 members all agreed that climate change requires them to double down on their own energy transition policies, and they committed to coming up with new plans before the Glasgow summit.

“I have to be honest; it was really exhausting,” Roberto Cingolani, Italy’s ecological transition minister, told reporters in long, winding and often confusing remarks following the conclusion of the conference.

On several critical questions—including the fate of coal and how to approach the goal of limiting warming to 1.5°C—agreement was elusive. Oscar Soria, an activist with U.S.-based activist group Avaaz, called it a “failure.” And even Cingolani, who was responsible for leading the discussions, acknowledged its shortcomings, pointing fingers specifically at China and India for failing to sign onto some of the more ambitious provisions. These topics will be raised at a higher level ahead of the G20 leaders meeting in Rome, where heads of government will meet before Glasgow.

“It’s a decent outcome in terms of what the expectations were,” says Alden Meyer, a senior associate at E3G, a climate think tank, and a longtime expert in international climate policy. “Of course, in terms of the state of the planet and the climate emergency that we’re in—the impacts that are mounting every day—it’s not adequate.”

This reality is a matter of simple math. The world has warmed around 1.1°C since the Industrial Revolution, and scientists expect that at 1.5°C of warming—perhaps a little earlier—the planet will face a variety of irreversible tipping points, from the collapse of ice sheets driving extreme sea level rise to the melting of Arctic permafrost that could release greenhouse gases that drive global warming even faster.

I’ve written these numbers and explained the science behind them countless times—in stories, in everyday conversations and in formal panels. Certainly, the delegates gathered in Naples understand them, too. And, yet, at times they seem to be moving by inches, not the leaps necessary to steer us from the brink.

There is blame to share, and fingers can be pointed in every direction. Countries with significant fossil fuel interests are reluctant to give up their domestic industry. Developed countries—particularly the U.S.—have failed to deliver the $100 billion annually they have collectively committed to helping their developing counterparts finance their climate measures. And many of the developing countries have prioritized growth, relegating climate to a second-tier priority.

Climate grief is hard to avoid when the numbers are so stark, and the reality so urgent. But fatalism is useless. Even with the lackluster outcome today, a path to success isn’t hard to envision. A few key announcements could accelerate the progress—think of the U.S. making a new, bold commitment to helping its developing counterparts pay for climate measures or China moving forward the date by which it says it will eliminate its carbon footprint.

But it’s also important to remember that no matter what happens in Glasgow, even if the world misses the “last, best chance,” the need to bend the emissions curve will continue. You don’t stop fighting a fire because it’s spreading; the world should not ignore the climate crisis because it’s deepening. Surpassing the 1.5°C target may means death and destruction, but 3°C would be much, much worse.

In May, the International Energy Agency laid out a roadmap to 1.5°C that included more than 400 landmarks that would put the world on a path to limiting the effects of climate change. “Some people ask me—and they are legitimate to ask—are you sure that we will reach 1.5°?” Fatih Birol, the head of the IEA told me over coffee in Washington last week. “Of course I’m not sure. But even if we don’t, if we do our best and follow this roadmap and we cannot reach 1.5, 1.6 or 1.7 is still better than 3.5° where the entire planet will burn.” 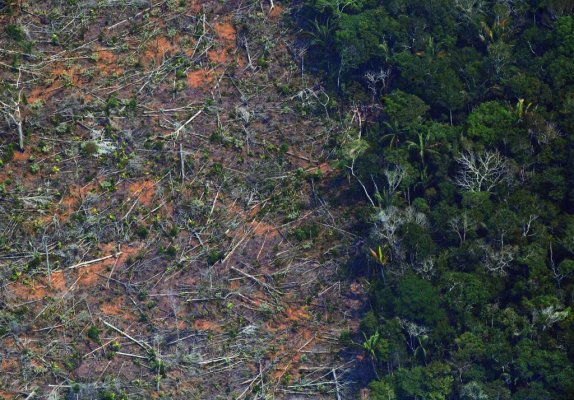 The Amazon Now Emits More Carbon Than it Absorbs. Can We Ever Reverse That Tipping Point?
Next Up: Editor's Pick