If you can find only one good thing to say about M. Night Shyamalan’s movies—and his defenders can find many more—it’s that they’re usually wrapped around at least a germ of a poetic idea. That’s certainly true of Old, in which—and these are almost the exact words of the advertising materials, for those who are spoiler-sensitive—a family on a tropical vacation find themselves on a secluded beach that somehow causes them to age nearly a lifetime in a single day. There’s so much you could do with that idea, just riffing on human fears of aging, or imagining what it would mean to miss out entirely on childhood. The possibilities are rich. But Old is just dumb.

Married people Guy and Prisca (Gael García Bernal and Vicky Krieps) are having serious couple problems. They have decided to give their two kids, Maddox and Trent (Alexa Swinton and Nolan River), aged 11 and 6, one last holiday before possibly ruining their lives forever. As this crew makes its way to an alleged island paradise in the shuttle provided by the resort, little Trent pipes up from the backseat, complaining about being too young to do all the truly fun stuff. “Stop wishing away this moment,” his mother, clearly someone who’s always good for a laugh, says ominously.

When the family arrives at the resort, it all seems too good to be true. And Prisca found this place—guess where?—online. So it must be legit. At breakfast the next morning, the manager of this island paradise (Gustaf Hammarsten) approaches their table with a conspiratorial twinkle. Apparently, on the other side of the island’s nature reserve, there’s a special secluded beach. He doesn’t tell all the guests about it—only the special ones. And a shuttle will drop them off right there. How does this not sound perfect? Even barrel-of-fun Prisca perks up.

The kids grow up too fast in 'Old'
Photo Credit: Phobymo/Universal—© 2021 UNIVERSAL STUDIOS. All Rights Reserved.

It turns out that several other guests have also been invited to the top-secret beach. (The hotel shuttle driver who ferries them there is played by Shyamalan himself. He seems really friendly! But don’t be fooled.) The beach gang includes an aged granny (Kathleen Chalfant), a little blond girl (Mikaya Fisher), a very skinny woman slinking into middle age in her blond extensions and string bikini (Abbey Lee), a sweet, knowledgeable nurse (Ken Leung), a psychologist (Nikki Amuka-Bird) and a famous rapper (Aaron Pierre). There’s also a surgeon gone mad, played by a pocketknife-wielding Rufus Sewell, who appears to be starring in his own separate movie, one that makes a lot more sense than the one we’re watching. When he implores the group for the name of a movie he just can’t conjure—it stars Marlon Brando and Jack Nicholson, but what’s it called?—they stare at him blankly, not caring a whit about his suffering, as some of us in the audience whisper furtively, “The Missouri Breaks.” (To Shyamalan’s credit, Sewell’s anguished trivia challenge is the funniest thing in the movie, a ripe bit of Quentin Tarantino-style waggishness.)

All or most of these individuals have a secret, because in a Shyamalan movie, secrets are king. And before you can say, “They grow up so fast,” the three kids on the beach have sprouted into versions of themselves played by Thomasin McKenzie, Alex Wolff and Eliza Scanlen. Scanlen, who gave a fine performance as Beth in Greta Gerwig’s Little Women, has a memorable scene in which she savagely stuffs her face with the pasta salad the resort has thoughtfully packed for the day’s picnic lunch. It’s wise to hire only the best talent for these types of Chekhovian acting challenges.

Things happen on the beach. Strange things. Suspenseful things. But enough about that. (Shyamalan adapted the story from the graphic novel Sandcastle, by Pierre-Oscar Lévy and Frederick Peeters.) Characters talk to each other loudly, maybe because they’re on a beach, maybe because premature aging is causing them to lose their hearing. In any event, each line of dialogue is like a stiff little flag run up a flagpole, left to flap forlornly in the breeze until another character sees fit to respond. The camerawork is nutty, a jumble of aggressively disorienting framing and arty closeups—this is great if you’ve always wanted to get a good look at, say, Vicky Kriep’s left ear. Shyamalan also makes a feeble attempt at addressing complex race relations. It’s the sort of thing one ought to do these days, so why not? And in a scene or two he allows characters to show tenderness for one another, so that’s nice.

At one point in Old, a character has a breakthrough: “Something is going on with time on this beach!” And darned if he isn’t right. Shyamalan may be best known for his “surprise” twists—in movies like The Village and The Sixth Sense—though not all his movies feature them: his most recent pictures, Glass and Split, featuring James McAvoy, are really just garden-variety multiple-personality thrillers. Old is something of a hybrid—beyond the basic plot, there are still a few surprises, which hardcore Shyamalanites may or may not find satisfying. And Shyamalan does—God knows why—manage to attract good actors, who seem eager to appear in his high-toned scares for smarties. To that end, Old may leave you feeling energized, alert, grateful to be young and alive. Or it may just leave you feeling older than you were 100-odd minutes ago, time you’ll never get back. Youth is wasted on the young, and sometimes at the movies, too. 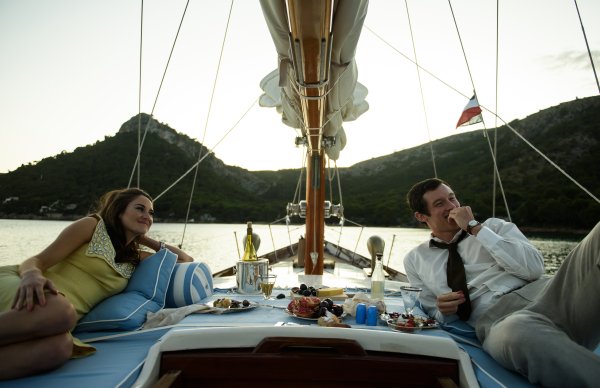 The Last Letter From Your Lover Falters Often, But Its Illicit Romance and Gorgeous Costumes Go Straight to the Pleasure Zone
Next Up: Editor's Pick