The Last Letter From Your Lover Falters Often, But Its Illicit Romance and Gorgeous Costumes Go Straight to the Pleasure Zone

Shailene Woodley and Callum Turner in 'The Last Letter From Your Lover'
Parisa Taghizadeh/NETFLIX—© 2020 NETFLIX, INC.
By Stephanie Zacharek

Even if we’re all doomed to decree, at some point about something or other, “They just don’t make ’em like they used to,” the comforting reality is that there’s always someone trying. How many times have we tolled the death knell for the romantic melodrama, only to have someone strive, even with only moderate success, to resurrect it? Ben Wheatley’s 2020 version of Daphne Du Maurier’s Rebecca is one recent example. Now here comes another, Augustine Frizzell’s adaptation of Jojo Moyes’ romance novel The Last Letter From Your Lover, starring Shailene Woodley and Felicity Jones as, respectively, a love-starved London society wife circa 1965 and a modern-day journalist who has lost her appetite for romance.

If you think of The Last Letter—which begins streaming on Netflix on July 23—as a descendant of movies like David Lean’s Brief Encounter and Irving Rapper’s Now, Voyager, it’s bound to suffer by comparison. Yet even if The Last Letter hovers around the Close, But No Cigar reading on the melodrameter, there’s something subliminally enjoyable about it. A beautiful amnesiac, a selection of fascinating uptight-chic mid-’60s ensembles, a luxurious locale or two, even a Persian cat who wanders very briefly through the movie, bestowing a casual blessing with its plume tail: In adapting Moyes, Frizzell has paid attention to certain details that go right to the pleasure zone. Even when the story falters, or becomes astonishingly silly, there’s still plenty to keep you gazing at the surface.

Read More: How to Write a Romance Novel in 2021

Woodley plays Jennifer, a young American married to Joe Alwyn’s Laurence, a rich and very stiff English industrialist whom she barely seems to know. In fact, she doesn’t really know him, at least as the movie opens: she has suffered a terrible accident—the scar on her cheek, barely noticeable with a bit of coverup or hidden behind the curve of her hair, clues us in to that shard of the story. As a result, she has lost her memory, and so she swans around unhappily in a large London house that means nothing to her. Then she removes a book from a shelf, and a letter falls out.

Meanwhile, in the present day, Jones’ Ellie rises from the rumpled bed of her last conquest—she can’t even remember his name—and rushes off to her newspaper job. The paper’s longest-running “women’s page” editor has died, and as Ellie digs through the publication’s archives—with the help of one of the most charming newspaper librarians ever, Nabhaan Rizwan’s Rory—she discovers first one love letter, and then several more. These are letters that were exchanged by Jennifer and her roguish—but sweet—journalist lover, Anthony (Callum Turner). Somehow, this affair precipitated Jennifer’s accident. Ellie keeps digging through the archives, looking for more clues to the mystery of this woman’s life.

Felicity Jones and Nabhaan Rizwan in 'The Last Letter From Your Lover'
Parisa Taghizadeh/NETFLIX—© 2020 NETFLIX, INC.

The Last Letter toggles between two stories and two eras: Ellie is the modern woman who has freedom but who’s too cynical to open herself to love; Jennifer is the woman who made a comfortable marriage, only to learn she’d struck the wrong bargain. Jennifer’s story is the more compelling of the two, not least because she gets so many lavish period details to swim around in: Some of the action unfolds on the French Riviera (the movie uses Majorca as a stand-in), which means we get to see Laurence and Jennifer driving—in a convertible, natch—along spiraling, treacherously gorgeous seaside roads, the chiffon scarf Jennifer has tied around her coif rippling just so in the breeze. Jennifer’s poor little rich woman wardrobe includes many, many pillbox hats and a tasteful cranberry Balenciaga-style trapeze coat with a slightly zany bow at the back—a signal that although Jennifer needs to be serious, befitting her marital status, she’s really longing for fun. (The costumes are by Anna Robbins, whose credits include Downton Abbey.)

The 1965 scenes also feature the best music, including not just go-to favorites like Aretha Franklin’s “Do Right Woman, Do Right Man,” but less frequently heard nuggets like Nancy Sinatra and Lee Hazlewood’s swervy, swoony “Summer Wine,” as well as Doris Troy’s sinuous 1963 ballad “Whatcha Gonna Do About It”—the latter used in a steamily romantic London nightclub scene so potent that could be a movie by itself.

Frizzell is both an actor and director (her first film was the 2018 dropout comedy Never Goin’ Back), and if she can’t always keep the plot running on a track that makes sense—well, who needs sense? She’s alive to small things, like music and sunlight and Jennifer’s perfect Cleopatra cat-eye, lifted directly from the mad early Dick-and-Liz era and dropped handily into ours. The actors seem to know what page Frizzell’s on: Jones’ Ellie has the eagerness of a forest chipmunk, which is not so interesting, but there’s a streak of cruelty in her, too, which is. She’s best in the scenes where Ellie’s doubts cloud her judgment. And although Woodley seems, at first, to be not quite comfortable in Jennifer’s elegantly dressed skin, in the end, there’s something touching about her reticence. Woodley looks great in the clothes. But as Jennifer, she also seems to be sending a Morse code through them, as if she knows they’re failing to tell her what kind of woman she wants to be.

The Last Letter From Your Lover is a far from perfect romantic melodrama. But what matters is how it strives to keep that genre breathing. Maybe streaming audiences will be the saviors of melodrama, now that big-screen audiences seem to care mostly about a noisier breed of spectacle. That’s ironic, considering there’s no greater crash-up than falling deeply in love at the wrong time, with the wrong person. Sometimes it helps to have a movie experience into which you can pour all those feelings, whether they’re immediately combustible or they flamed out long ago. 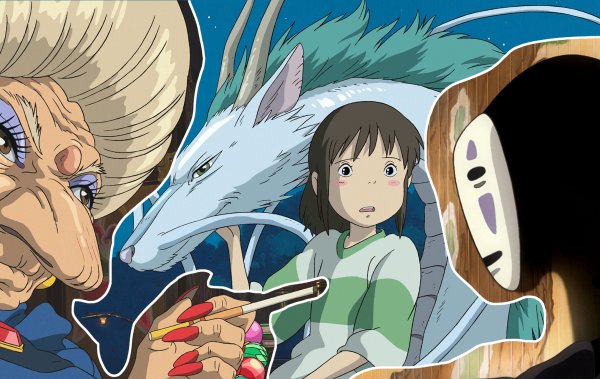 How Spirited Away Changed Animation Forever
Next Up: Editor's Pick