Lewis Hamilton of Great Britain and Mercedes GP looks on as the prototype for the 2022 F1 season is unveiled during previews ahead of the F1 Grand Prix of Great Britain at Silverstone on July 15, 2021 in Northampton, England
Michael Regan—Getty Images
Ideas
By Melody Patry
Melody Patry is the London-based advocacy director at Access Now, a nonprofit which works to defend and extend digital rights globally

On Sunday, Formula One driver Lewis Hamilton was racially abused on social media after winning the British Grand Prix. It was just the latest in a series of noxious incidents where Black athletes in the U.K. have been targeted by racists online following high-profile sporting events.

How the athletes themselves perform doesn’t seem to matter. As writer and podcaster Kelechi Okafor put it in a haiku on Twitter, for many people of colour on the internet, and especially Black people, “Win or Lose The Outcome Is Abuse”.

It might sound tempting. But outlawing online anonymity and enforcing users to prove their identities is not the secret recipe for a more respectful, equal, and prejudice-free world. Not only would it fail to eliminate racism, it would also put many people around the world at risk.

For human rights defenders, lawyers, dissidents, journalists and whistleblowers, anonymity is a shield that allows them to expose injustice and preserve the truth with a reduced risk of persecution. This week’s outrageous revelations of state-sponsored surveillance abuse by the Israeli spyware firm NSO Group, and the leaking of a 50,000-strong list of potential targets, lays the global scale of governments’ tracking out to bear. When your government is out to get you, anonymity online isn’t a privilege, it is a lifeline.

Read more: Black Soccer Players Are Being Racially Abused on Social Media. How Can the Platforms Do Better?

If social media companies and governments forced users to reveal their legal identity it would cause severe harm, particularly to those already most at-risk — such as people of colour, women, and members of the LGBTQ+ community. For many people who have long been excluded from physical and online spaces, or who are already marginalised and targeted, anonymity is a tool of survival. Access Now’s Digital Security Helpline was recently working with a media outlet focusing on news for the LGBTQ+ community. Their audience comes mostly from places where merely existing outside the heteronorm is criminalized, and where the risk of physical attacks—whether from state actors or neighbours—is immense.

For these people to engage with the media, express themselves, and share information relatively safely online, anonymous accounts are the only option. Similarly, survivors of domestic violence have found safe places online thanks to their ability to connect and exchange while preserving their identity. There is a plethora of research and testimonies showing how for millions of people, anonymity online is essential to individual safety, and a facilitator of freedom.

There’s also plenty of evidence that shows banning anonymity to encourage “civility” online simply does not work. When the Republic of Korea attempted a real-name policy in 2007, it left the government with lackluster results, proving to be ineffective at preventing “abusive” comments, with only a 0.9 percent decrease after one year. Just like offline spaces, many abusers online proudly share their real identities, or don’t actively try to conceal who they are. Anonymity isn’t the problem here; racism is.

To truly create impact, we must look into the incentives that encourage people to hate, and be hateful online: if not anonymity, what — and who — ignites the flames? We don’t have to start from scratch — there have already been numerous studies exploring hateful rhetoric, especially from politicians and high profile figures, and the role it plays in inciting violence, whether it manifests on or offline.

Social media platforms have more to do, too. Automated amplification has also played a role in emphasising incendiary content and companies still have a long way to go to provide transparency in ranking algorithms so we make sure as a society that hatred is not being actively promoted for clicks. Likewise, review by and appropriate training of human moderators for flagged content is key. We have the know-how, we just need the will.

So let’s stop focusing on the wrong things. Blaming the Internet for racism and other societal issues that predate it is an easy way to avoid accountability. Hoping that we can “instagram our way out of racism” by banning anonymous accounts, or sharing a black square on our feed, is techno-solutionism. It is also reductionist in that it negates the oppressing systems at play. Finally, it offers a convenient distraction for politicians — or heads of sports federations, universities, or other institutions — who don’t want to address the root of the problem: systemic racism. 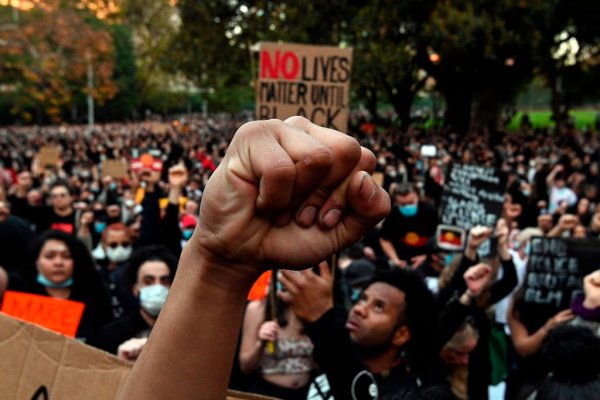 The Fight Against White Supremacy Isn't Just an American One
Next Up: Editor's Pick