The Amazon Now Emits More Carbon Than it Absorbs. Can We Ever Reverse That Tipping Point?

It’s a high bar to clear, but this is one of the most depressing facts I’ve read as a climate journalist: the Amazon rainforest—a region known as “the lungs of the world” but battered by decades of deforestation—now emits more carbon than it absorbs. That’s the conclusion of a widely cited study published last week in the journal Nature, for which scientists undertook 590 flights over the Amazon to measure local atmospheric carbon levels over eight years, from 2010 to 2018.

Lead scientist Luciana Gatti, a researcher at Brazil’s National Institute for Space Research (INPE), found her findings hard to accept too. “I resisted these results for a long time, because I wanted to believe that the Amazon was still a sink of carbon,” she says. Gatti examined the measurements for two years and came up with seven different methods to calculate how carbon concentration was changing around the rainforest. “Finally I was convinced: it’s a source.”

My immediate question after reading this study, was can we ever reverse this tipping point? To answer that, you need to understand what has gone wrong.

Most obviously, the clearing of the forest means there are fewer trees taking in carbon dioxide and giving off oxygen through photosynthesis. (More than 17% of the Amazon’s area has been deforested since the 1970’s). Meanwhile the principal method that farmers and land developers use to get rid of the trees—burning them—releases vast amounts of carbon monoxide into the air. Those dynamics have made the forest on the whole a source of carbon emissions.

But the really troubling thing—and a groundbreaking part of this study—is that the southeastern section of the Amazon is not only emitting more carbon than it absorbs when there are fires there. It is emitting more than it absorbs all the time. This is because the burning and logging of trees has disrupted the Amazon’s hydrological cycle. In healthy parts of the forest, trees perform “evapotranspiration,” sucking water up from the ground and releasing it into the air. On a mass scale, that process creates so-called “flying rivers” that moisten the air and generate rainfall. In heavily deforested areas, a terrible feedback loop has begun: fewer trees mean less moisture in the air, which makes the air drier and hotter—parts of the canopy have topped 50°C at points, Gatti says. As well as making forest fires spread more easily, that kind of heat can kill many of the Amazon’s trees. And when they decompose, they release their long-stored carbon. That leaves fewer trees to add moisture to the air and the cycle continues.

To restore the Amazon’s carbon-sink role, we’d need to first end the forest fires, and then stop that feedback loop. It’s theoretically possible, but it won’t be quick, and there are major political hurdles to clear first.

The situation in the Amazon is likely already worse than it was when Gatti and her colleagues took their last measurements in 2018. Since then, Brazil’s far-right President Jair Bolsonaro has overseen a rapid acceleration in deforestation in his country, which contains 60% of the Amazon, including the problematic southeastern section. Climate advocates say he has gutted the budgets of agencies charged with preventing illegal fires and created a culture of impunity for those that set them. In recent months Bolsonaro has stepped up legislative efforts to make it easier for people to develop land in the Amazon. If he wins a second term in Brazil’s October 2022 elections and continues his current set of policies on the Amazon—which he has shown little sign of abandoning—scientists say large sections of rainforest could transition into a savannah by the time he leaves office in 2026.

If he loses, Amazon advocates still have their work cut out for them. A new government would need to take rapid measures to crackdown on deforestation by expanding the enforcement agencies that monitor the rainforest, strengthening the penalties for setting illegal fires, and supporting the indigenous communities that live in the Amazon and still work to protect the rainforest. They would then need to massively ramp up reforestation efforts—currently done on a relatively small scale in Brazil by non-profits. It would require millions of dollars in investment from the Brazilian government and international donors to plant the right kinds of trees in the right places.

If that all happened, a positive feedback loop might slowly begin to replace the negative one currently in effect in the southeast. “Part of the forest would recover a little this year, then there will be more forest to evapotranspirate and the situation will be a little better the next year, and the next year,” Gatti says, getting a little emotional at the far-off prospect. “It depends on the amount we do—I think it’s possible to reverse—but we need to try. We need to try.” 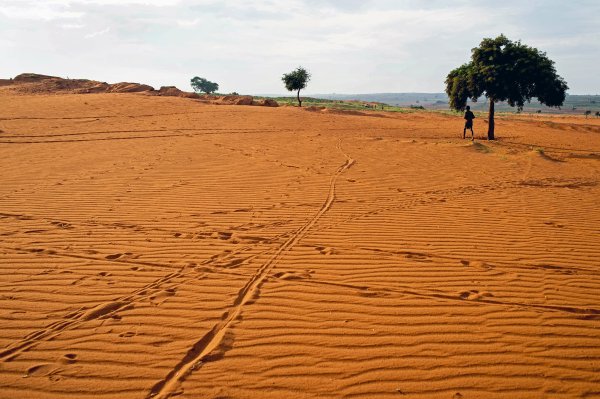 How Climate Change Caused Madagascar's Famine
Next Up: Editor's Pick