Hungary’s Orban Proposes Referendum to Push Back Against E.U. on LGBTQ Law

Activists wear shirts reading "Love is a human right" as they fly a giant heart balloon in rainbow colors during a flashmob in order to protest against a new law in front of the parliament in Budapest on July 8, 2021. - A Hungarian anti-paedophilia bill that came into force on July 8, 2021 was condemned as "homophobic" by civil organisations during the protest. The law banning the "display or promotion" of homosexuality or gender change to minors has sparked widespread outcry and threats of sanctions from Brussels if the bill is not rectified.
ATTILA KISBENEDEK—AFP / Getty Images
By Zoltan Simon / Bloomberg

Prime Minister Viktor Orban proposed a referendum to push back against European Union pressure to change a Hungarian anti-LGBTQ law that sparked a furious reaction in the bloc including calls to cut off the nation’s funding.

The move suggests Orban, who next year is facing the most closely-fought parliamentary election since he returned to power in 2010, is digging in his heels in Hungary’s fight with the E.U. over democratic values. It may also make it less likely that billions of euros of E.U. pandemic funding will be released quickly.

“When the pressure on our homeland is so great, then only the will of the people is able to defend Hungary,” Orban said in a Facebook post on Wednesday.

The announcement comes as the four-term Hungarian leader is under fire for reportedly deploying invasive spyware to monitor his critics, including journalists, lawyers, an opposition politician and a media tycoon. Hungary was the only E.U. country named to have purchased the Pegasus surveillance tool from Israel’s NSO group. The government hasn’t confirmed or denied the reports.

Hungary recently outlawed media content to minors that authorities deem to “promote homosexuality,” the latest in wave of legislation targeting the LGBTQ community. Earlier, Orban’s government effectively banned adoption for same-sex couples and scrapped the right to have legal recognition of gender change.

The E.U. has started legal action against Hungary on the LGBTQ law and decided against authorizing the distribution of pandemic funding over concerns about judicial independence and corruption. Orban’s government says the two issues are linked.

The E.U. won’t approve Hungary’s 7.2 billion euros ($8.5 billion) in stimulus funding as long as Orban doesn’t roll back a judicial overhaul, which gave him sway over parts of the court system, and doesn’t give guarantees to step up its fight against graft related to E.U. funds, Hvg.hu news website reported on Tuesday, citing an interview with E.U. Justice Commissioner Didier Reynders.

In a separate announcement, Budapest Mayor Gergely Karacsony—the front-runner to win the united opposition’s primary later this year for the right to challenge Orban—said he was also proposing a referendum on other issues.

They include whether they support the construction of a controversial Orban-backed Chinese university campus in the capital and whether they agree to block a government plan to hand over the operation of the country’s roads to private companies. 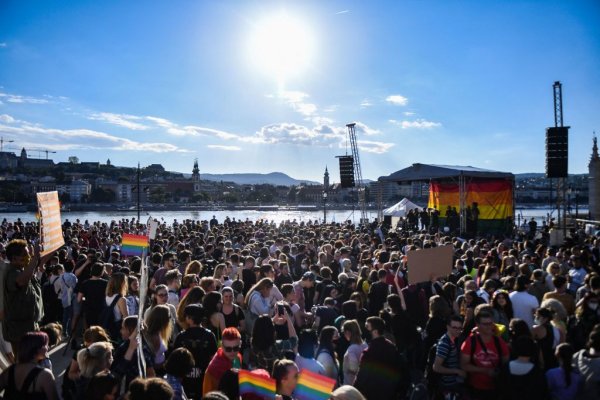 EU Begins Legal Action Against Hungary Over its Anti-LGBTQ Law
Next Up: Editor's Pick