Demonstrators attend a Black Lives Matter protest to express solidarity with US protestors in Sydney on June 6, 2020 and demand an end to frequent Aboriginal deaths in custody in Australia.
SAEED KHAN/AFP via Getty Images
Ideas
By Chandran Nair
Chandran Nair is the founder and CEO of the Global Institute for Tomorrow. His latest book is Dismantling Global White Privilege: Equity for a Post-Western World, due out in December 2021.

Last month, U.S. President Joe Biden signed legislation to make Juneteenth a Federal holiday, marking the day in 1865 when Black people in the U.S. gained freedom from slavery. Emancipation did not stop the repression of Black people, nor will this new gesture change much.

The bill was passed against the backdrop of the murder of George Floyd and the actions of the Black Lives Matter (BLM) movement, which brought this history of injustice to global attention. Yet the past year has seen a surge in the activities of white supremacist groups across the West, resulting in U.N. Secretary General Antonio Gutteres describing white supremacy as one of the biggest challenges facing the world.

Despite this global awakening to the problem, it is still unclear if Western nations have understood that the core driver of racial injustice—in their midst and globally—is the need to retain white global economic power at all costs. There is growing awareness that social structures have helped grow racist mindsets and behaviors among white communities, allowing them to benefit from a construct that places whites at the top of an economic, political and cultural pecking order. But dismantling these will not be easy, as they are the very same structures on which the modern world is built.

The difficulty arises because race generally does not feature in mainstream discussions of global governance. Yet, it would be naïve to not understand that the racist views of Western leaders have factored into major decisions, including acts of aggression on others seen as inferior. Former U.S. Secretary of State Madeleine Albright once said “We think the price is worth it” after being asked if the death of half a million Iraqi children as a result of sanctions was acceptable.

Read more: How Activists in Eight Countries Are Fighting for Racial Justice

Given the intensity of the race discussion in the U.S., it is surprising that critical race theory (which describes how social structures and cultural norms help perpetuate white privilege) is not applied at a global level. Why is this the case? One possibility is that the usual analytical foci—like laws and institutions—are less defined globally. Many of these structures are also dominated by Western powers. Race is rarely mentioned, for example, in providing explanations as to why, even in the 21st century, leaders of the World Bank or the International Monetary Fund must be nominated by the U.S. and Europe—an imbalance that has led to calls for a democratic reform of voting powers within both bodies.

There is poor understanding of how white privilege operates outside the U.S. and Europe. In fact, there is a danger in placing American race-based oppression at the center of global discussions on white supremacy. Let’s be explicit: racial oppression in the U.S. is the tip of the iceberg of a much deeper and more harmful global phenomenon of white privilege that has for too long been conveniently ignored. The application of critical race theory and other insights into structured discrimination would help unravel much about how white privilege operates on the world stage.

Race explains the current tensions between the West and the Islamic world, and the West and China. (In 2019, the U.S. State Department director of policy planning, Kiron Skinner, said that challenging “the long-term threat” of China is difficult because the country is “not Caucasian.”) It elevates, shapes, represses, subjugates and destroys to seek and preserve economic power. Yet there has been a real absence of an honest global examination of its role.

With roots in European-led colonization, race is now hard-wired into the structures and institutions of globalization. The Big Four of Accounting, the Magic Circle of Law, the Big Three of Management Consulting, rating agencies: all of these companies that have enormous global influence are headquartered in the West. Liberal narratives are created to justify their practices.

At sought-after schools, from Harvard to Oxford to Wharton, these narratives are fed to future business and government leaders from around the world, normalizing and institutionalizing power differences. Such values are then turned into institutions, regulations and laws that reinforce inequality.

At the apex sits the G7. Its meeting in London in June was a stark reminder of underlying Western assumptions. The group has no Arab, African or Asian representative besides Japan, and invoked a struggle between “Western democracy” and “authoritarian China,” calling again for an investigation into the origins of COVID-19.

A better world cannot be forged without unmasking and dismantling the global superstructure that perpetuates white, Western dominance. Recognizing white privilege is key to this process, as centuries of Western dominance have inured the world to it. This will be difficult and especially so for Western liberals and millennials who believe they are fighting the good fight by latching on to fashionable trends such as opposing racism in sports and movies or supporting BLM and associated movements. Accepting they are the beneficiaries of a global system of white privilege is a wholly different moral dilemma.

Ending white privilege can start only if we have a global debate about what has been a taboo subject in international relations and business. Western institutions should not see this as an attack on white people or something rooted in anti-white or anti-Western sentiments. It is necessary to expose white privilege everywhere, not just because it is an injustice, but because by working to dismantle it, we will be creating a post-Western world that is fairer, has less conflict, is more united and is better able to respond to the existential challenges facing humanity. 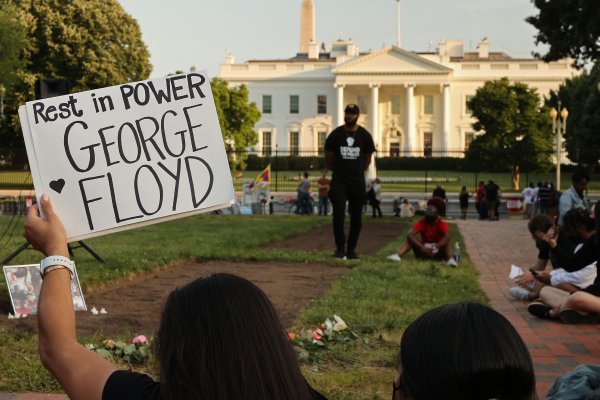 How Far Has America Come Since the George Floyd Protests?
Next Up: Editor's Pick