President Joe Biden departs after delivering remarks on the economy at the White House in Washington, on July 19, 2021.
Jonathan Ernst—Reuters
By Philip Elliott

The personal wound was hard to mistake in President Joe Biden’s voice yesterday as he stood in the White House’s State Dining Room to make yet another push for a disintegrating infrastructure agenda that was supposed to have been a bipartisan package but, at the moment, only has Democratic votes guaranteed and carries a mild indifference from Republicans, at best.

“Whatever different views some might have on current price increases, we should be united on one thing: passage of the Bipartisan Infrastructure Framework, which we shook hands on,” Biden said, taking a beat, perhaps, to consider just how that act has shrunk in honor since he first won election to Washington back in 1972. “We shook hands on it.”

Well, handshakes and private assurances only go so far in Washington these days. As much as he campaigned as a glad-handing consensus chief, the politics of D.C. are far less congenial than what he’s known over the decades as a Senator. Today’s Washington has incentivized all of the wrong things, and the partisan wings of both parties punish centrism, at least on the very vocal social media platforms.

In a prophetic assignment of acronyms, the Bipartisan Infrastructure Framework, which proposes over $579 billion in new spending on hard projects like roads and bridges, has the unfortunate shorthand of BIF—pronounced biff, which rhymes with whiff. Struck in principle last week after long stretches of haggling between Senate Republicans and Democrats—and top White House officials looking for a first-term win for history—BIF now appears on the verge of collapse as Senators get ready to vote whether or not to open debate on the bill tomorrow. Biden’s faith in politicians’ decency seems to have once again caught the White House off balance with a perceived betrayal of a bipartisan pact, putting in peril a combined $4 trillion, double-barreled infrastructure push that could give Biden a political win that conservatives cannot abide.

All of this rightly feels familiar. For weeks, Biden privately negotiated with Sen. Shelley Moore Capito of West Virginia, but ultimately couldn’t find a landing point. He then cast a wider net, working with a bipartisan clutch of former colleagues on an ambitious—and yet milquetoast to some—plan that has few fans among House Democrats. In fact, the Democratic Chairman of the Transportation and Infrastructure Committee said during a call with colleagues yesterday that a collapse of the bipartisan Senate framework would be better than what’s on the table. Last night, House Speaker Nancy Pelosi told her Leadership team to stay patient and wait for the Senate to show its final draft of a deal.

Although there are dozens of remaining sticking points on the bipartisan portion of the plan, the stickiest is a provision that would let the Internal Revenue Service do the unthinkable: actually collect some of the $1 trillion in unpaid taxes legitimately owed by Americans. Biden and the bipartisans agreed to that provision as a way to pay for the spending in the package, but Republicans in recent days balked and have cast into serious doubt whether 10 of them would cross party lines and even let debate begin tomorrow. Instead, that piece is likely to get kicked to the Democrat-only portion of this.

Over the weekend, Republican Sen. Rob Portman said the IRS provision was going to fall off the bill—which, if we’re being honest, doesn’t really exist beyond legal pads and PostIt notes. (“How can I vote for cloture when the bill isn’t written?” asked Sen. Bill Cassidy, the Louisiana Republican who is part of the negotiations. He’s not wrong, as talks last night stretched until 11 p.m. on a Zoom no one wanted to be a part of.)

Even slightly better IRS enforcement is expected to grab about $100 billion from tax dodgers over the next decade, which in turn would fund a second-wave infrastructure plan that is expected to cost $3.5 trillion in new spending, and which Democrats’ plan to pass unilaterally through reconciliation. (The nonpartisan Committee for a Responsible Federal Budget actually estimates the true cost of the Democrats’ plan to exceed $5 trillion.) But Republicans aren’t eager to give any more power to the IRS, an arm of Washington they have long distrusted.

To be clear, this is a lot of messy politics. Democrats are chugging along with a two-track plan to pass the broadly popular infrastructure bill with Republican votes, and then go it alone with their partisan agenda that includes expanded access to education and child care, broader Medicare benefits and efforts to combat climate change. Both measures are due on the Senate floor tomorrow. Senate Majority Leader Chuck Schumer told colleagues last night that the procedural vote was merely to open debate on the bipartisan plan and, more vaguely, “get the ball rolling this week” on the Democrats-only plan that can pass along a party-line vote with Vice President Kamala Harris breaking the tie.

The process isn’t unfamiliar on Capitol Hill. An effort to combat Chinese ambition started this way. So, too, did an anti-hate crime package. But this is literally untold trillions of dollars. And none of it has really been sketched out. Schumer says he’ll introduce a shell bill with what’s agreed upon and then lawmakers can add to it as they come to agreement. It’s like an empty Christmas tree in a way, and ornaments can be added as the glue dries. It’s neither elegant nor novel. It’s also about as durable as that handshake that seems to have stung Biden.

Finally, a personal note. The D.C. Brief turns one today, and it’s been a privilege to be in your inbox a few times a week. If you’re reading this on the homepage, as a forward from a friend, from social media, you can still sign-up here. It’s free and ready for you to read when you have a few minutes of spare time. And if you’re disagreeing with anything here—not a big ‘if,’ I reckon—politics@time.com is always open. 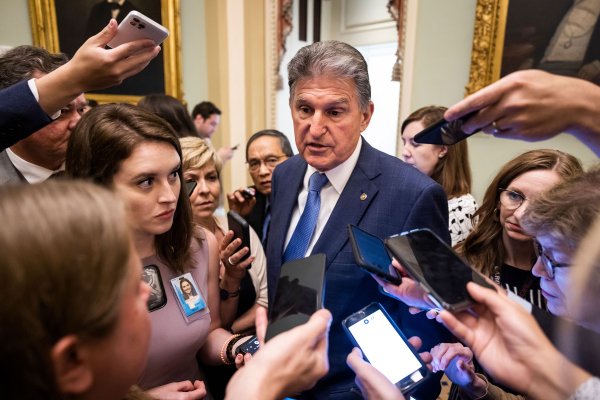 Why Congress Deserves Its Own Emmy Category
Next Up: Editor's Pick