Climate, Not Conflict. Madagascar's Famine is the First in Modern History to be Solely Caused by Global Warming

Heatwaves, wildfires, floods. If there’s still any doubt that the summer of 2021 is a turning point for a global awakening over the looming climate crisis, you can add one more plague of biblical proportions to the list: famine.

The southern part of the island nation of Madagascar, off the east coast of Africa, is experiencing its worst drought in four decades, with the World Food Program (WFP) warning recently that 1.14 million people are food-insecure and 400,000 people are headed for famine. Hunger is already driving people to eat raw cactus, wild leaves and locusts, a food source of last resort. The WFP, which is on the ground helping with food distribution, describes scenes of unimaginable suffering, with families bartering everything they have—even cooking pots and spoons—for the paltry tomatoes, scrawny chickens and few bags of rice still available in the markets. “The next planting season is less than two months away and the forecast for food production is bleak,” writes WFP spokesperson Shelley Thakral in a dispatch from the most affected area. “The land is covered by sand; there is no water and little chance of rain.”

The WFP warns that the number of locals facing phase 5 catastrophic food insecurity—development speak for famine—could double by October. And the group has the responsible party squarely in their sight. “This is not because of war or conflict, this is because of climate change,” says WFP Executive Director David Beasley.

Historically, famines resulted from crop failure, disaster or pest invasion; modern famines are largely considered to be man-made—sparked by conflict combined with natural disasters or incompetence and political interference. Madagascar is facing none of those, making it the first famine in modern history to be caused solely by climate change alone. It’s unlikely to be the last, says Landry Ninteretse, the Africa director for climate advocacy organization 350.org. “In recent years we’ve seen climate calamities hitting one country after another. Before it was the horn of Africa, and now it is Madagascar. Tomorrow the cycle will go on, maybe in the northern part of Africa—the Sahel—or the west. And unfortunately, it is likely to continue happening because of climate change.”

Increasing temperatures are disrupting global weather patterns that farmers, particularly those in the developing world, have relied upon for centuries. Monsoons have become increasingly unpredictable, starting later than usual, showing up in the wrong place, or sometimes not showing up at all. This is wreaking havoc in places that depend on rain for agriculture. The southern part of Madagascar, a lush, largely tropical island famous for its biodiversity, has experienced below average rainfall for the past five years. Most people in the south depend on rain-fed, small-scale agriculture for survival, but because of the drought, rivers and irrigation dams have dried up.

The WFP says it needs $78.6 million dollars to provide lifesaving food for the next lean season in Madagascar, but it is going to take a lot more than that to help the countries most affected by climate change able to adapt in ways that prevent future famines. Southern Madagascar, for example, will probably need irrigation systems, along with more drought-tolerant crops and hardier breeds of cattle. Madagascar, one of the poorest nations in the world, is unlikely to be able to afford such innovations on its own.

As part of the 2015 Paris Agreement on climate change, wealthy nations agreed to set aside $100 billion a year in climate financing to help developing nations adapt, but they have yet to meet that goal. In 2018, the latest year for which data are available, donors were still short $20 billion. But investing in climate change adaptation and mitigation plays dividends in the long run. The World Bank estimates that climate change could cause more than 140 million people to move within their countries’ borders by 2050 in sub-Saharan Africa, South Asia and Latin America, with severe consequences on economic development. Many others will seek to leave their countries entirely. “We used to see our brothers and sisters in the Sahel leaving because of conflict and looking for better economic opportunities, but now it is climate change that is becoming one of the major drivers, pushing out people who can no longer cultivate their land,” says Ninteretse. “This is not only going to impact Africa, but also Europe, Asia, and America as well, as people seek safer places where they can live.”

Madagascar may seem far away, but the issues should feel close to home, wherever “home” might be. “This famine in Madagascar, the heat wave in America, the floods in Germany, this is an indicator that climate change needs to be taken seriously,” says Ninteretse. “In the same way the world reacted the pandemic and were able to get vaccines in less than a year—If the world would have reacted in the same way when we started sending the first warning signals of climate change, the situation would be much better than what it is now.” 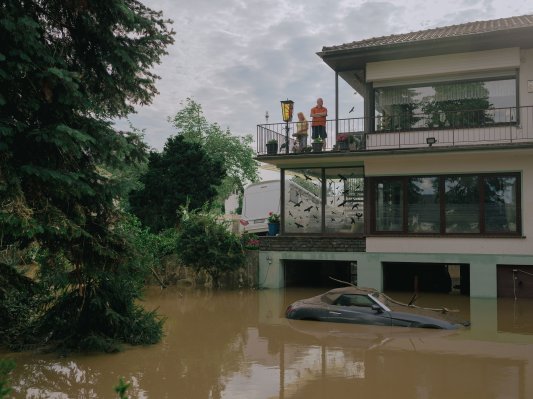