Senate Backs Bill to Ban Xinjiang Goods Unless Waiver Given

The U.S. Senate passed a bill Wednesday that would ban all goods from or made in China’s Xinjiang region unless importers can prove they weren’t made with forced labor, a move that could potentially have widespread implications for the solar industry.

The Uyghur Forced Labor Prevention Act requires the U.S Department of Homeland Security to create a list of entities who collaborate with the Chinese government in the repression of ethnic minority Uyghurs and other groups. It also contains a “rebuttable presumption” that assumes all goods were made with forced labor unless the commissioner of U.S. Customs and Border Protection gives an exception.

“Once this bill passes the House, and is signed by the president, the United States will have more tools to prevent products made with forced labor from entering our nation’s supply chains,” Senator Marco Rubio said in a statement.

The U.S. has repeatedly criticized Beijing over its actions in Xinjiang, saying they amount to genocide and crimes against humanity. A group of United Nations experts said in 2018 that anywhere from tens of thousands to “upwards of 1 million” Uyghurs have been detained, while a labor-transfer program has generated concerns that participants are coerced into taking jobs.

The U.S. has already put import bans on cotton, tomatoes and some solar products originating from Xinjiang, and sanctioned Chinese officials overseeing the region along with the European Union, the U.K. and Canada. Last week, The U.S. added 34 entities to its economic blacklist, including 14 Chinese enterprises that are alleged to be involved in human-rights abuses in the Xinjiang region.

China denies any forced labor, calling it the “biggest lie of the century,” and says its policies are lifting the region out of poverty, boosting the economy and countering extremism. It has hit the U.S. and its allies with retaliatory sanctions, straining broader relations with a range of countries.

“The U.S. side hypes up Xinjiang-related forced labor,” Chinese Foreign Ministry spokesman Zhao Lijian told reporters Thursday at a regular press briefing in Beijing. “The true motive is to damage the prosperity and stability in Xinjiang, deprive the Xinjiang people of their right to life, employment and development.”

Xinjiang is the key global hub for production of polysilicon, which is used in manufacturing of solar panels. It’s sent for further processing across China and other countries before it’s ultimately assembled into the products that are shipped to the U.S., making it a complicated task to verify the provenance of imported components.

“This may well mean that modules shipped to the U.S. must avoid Xinjiang polysilicon altogether, as well as tracing metal silicon supply to sources outside Xinjiang,” BloombergNEF said in a statement. About half the world’s polysilicon will be produced in Xinjiang this year, while the U.S. will account for approximately 14% of global for solar panels, BNEF data shows.

In June, the White House announced that personnel at all U.S. ports had been instructed to begin “immediately” detaining shipments containing silica-based products made by Chinese manufacturer Hoshine Silicon Industry (Shanshan) Co., Ltd. Around the same time, the U.S. Department of Commerce Department added Hoshine and four other solar-related companies with facilities in Xinjiang to its export blacklist.

Exporters selling solar products could seek to switch vendors in their supply chains for items intended to be exported to the U.S., or ensure they use only manufacturing lines outside of Xinjiang, BNEF said last month in response to the Biden’s administration’s curbs on Hoshine. The U.S. imported $8.2 billion in solar cells and modules in 2020.

U.S. customs in January blocked a shipment of shirts made by Japanese clothing giant Fast Retailing Co.’s Uniqlo line for violating an order prohibiting imports of items suspected to be produced by forced labor from China’s state-owned Xinjiang Production and Construction Corps. Uniqlo said it had submitted paperwork to U.S. Customs showing its products met the import requirements and that it has mechanisms in place to identify human rights violations in its supply chain.

Hong Kong-based Esquel Group, which isn’t listed, is suing the U.S. over what it’s calling the “erroneous” blacklisting of its unit Changji Esquel Textile Co. Ltd., maintaining it was “falsely implicated” in the use of forced labor in Xinjiang. The company supplies retailers including China’s Anta Sports Products Ltd., Hugo Boss and Ralph Lauren.

The latest bill, which passed the Senate unanimously, also broadens the scope of asset- and visa-blocking sanctions related to Xinjiang to include foreign individuals and entities. 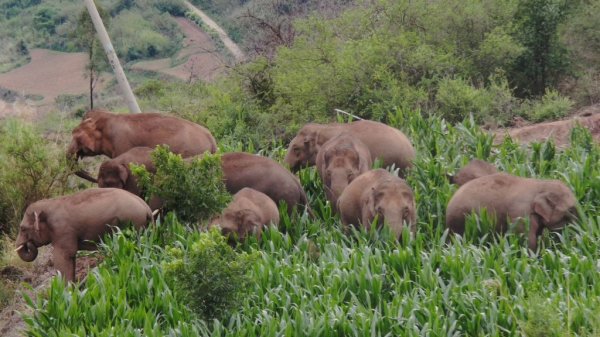 China's Wandering Elephants Put New Focus on the Environment
Next Up: Editor's Pick