When Jovnel Moise, a deeply unpopular president of Haiti since 2017, was assassinated on July 7 by a squad of gunmen posing as DEA agents, the news stunned and horrified the world. Even Pope Francis weighed in with sadness, condemning “all forms of violence as a means of resolving crisis and conflicts,” and wishing for the Haitian people “a future of fraternal harmony, solidarity, and prosperity.”

Most Haitians shrugged off the news and braced themselves for worst, while praying the violence that has plagued their lives the last few years is not exponentially increased by the violence of losing their freedom to foreign forces.

The drumbeat of news of brutal killings and kidnappings of neighbors and friends, priests and commoners, and children and cops has become routine in Haiti since 2018, when an unforeseen spike in gas prices triggered protests against the Moise government. Over the past three years gang-related violence has gone from accidental by-products of protests against presidential incompetence to a fever pitch of terrorism and opportunistic crimes by marauding gangsters. The police and national guard had long been outgunned by these well-funded and well-armed gangs. The COVID-19 pandemic failed to dent their reign of terror.

By this summer many parents of means began sending their kids to live with relatives in New York, Miami, Paris, and Montreal, and enrolling them in schools in those cities for the coming school year, as they sought business and career opportunities on new shores. The last people Haiti could afford to lose were following the international community in bailing out on Haiti. Both in 2018 and 2019, I myself was evacuated from Haiti by United Nations security after violent protests broke out and made getting any missionary work done impossible. The U.N. eventually gave up on Haiti after nearly 15 years, probably a decade after Haitians had given up on the U.N. Yet disaster relief aside, the U.N.’s presence was reassuring and academic. And the hope for peace and prosperity it represented was snuffed out.

Moise’s death is the culmination of years of lawlessness, frustration, and hopelessness in Haiti. Call it Peak Failed State

But we should also consider the leadership vacuum this murder creates an opportunity.

President Biden can chart a new, richer direction for U.S.-Haiti relations, if he plays this moment constructively. Calls for President Biden to send in U.S. troops to broker peace between the government and the gangsters and pave the way for elections are misguided and far too short-sighted. Bullying Haitians doesn’t work. Washington has alternated with punishing Haitian leaders with cruel embargoes to humiliating Haitians with military takeovers since the country was founded almost 220 years ago. By over investing in the status of the Haitian president instead of Haitian capitalism, Washington has exhausted the good will of the Haitian people. Washington shouldn’t try using U.N. Peacekeepers to serve as frontmen and a pacifying force in Haiti either. Haiti’s criminals, both white and blue collar, spent the duration of the most recent U.N. peacekeeping mission in Haiti gorging profits from the economic bubble created by the U.N., and, sadly enough, sending most of those profits abroad to fund their own investments instead of reinvesting them in Haiti.

It is time for Washington and other would-be friends of Haiti to try a new approach to helping Haiti develop. Focus on the economy, guys. Every future Haitian president will be a dead man or woman walking after a year, like Moise and his predecessors were, if the economy doesn’t bring tangible improvements to Haitian lives. The success of Haiti’s economy will enhance and protect its democracy and the careers of its politicians and policymakers, not the other way around. After all, the most common knock against Haiti is that it’s the poorest country in the very wealthy Western Hemisphere. But being poor in a rich neighborhood is not a sin.

Having rich neighbors like the U.S., Canada, and the Bahamas, and a successful sibling like the Dominican Republic, the country Haiti shares the island of Hispaniola with, is a boon to Haiti. Unlike Afghanistan (#169) and the African countries in the bottom 40 of the United Nations’ Human Development Index, which ranks countries annually after measuring their citizens’ average life expectancies, years of schooling, and gross national income, among other factors, Haiti (#170 out 189 countries) is a mere 2-hour flight to the 17th most developed country in the world (the U.S.), a good swim from the 58th (the Bahamas), and can move goods by truck to the 88th (the Dominican Republic).

Make no mistake, the news of their president’s assassination stuns and terrifies Haitians, because it makes whatever security measures they’ve been living by feel bone-chillingly flimsy. So if President Biden wants to intervene constructively in the lives of the 11 million in Haiti, whose empty stomachs can’t be filled by ballots, he has to offer crime solving muscle. But more importantly, he must offer better trade relations with the U.S. and prepare an economic stimulus plan to develop Haiti in partnership with the Dominican Republic, Haiti’s business community, and sustainable development engineers and farmers. Haiti has good assets to pump cash into: perfect beaches and weather all year-round for tourism as fine as anywhere else in the Caribbean, thriving arts, entertainment, and literature that annually produces some of the best novelists, musicians, and filmmakers in the francophone world and the U.S., agriculture, gold mining, and a multilingual and industrious workforce.

What Haiti has always lacked is good neighbors and fair trading partners other than Cuba, Brazil, and Venezuela. With a terrible stroke of his pen, President Clinton destroyed Haiti’s rice exporting industry with surprise tariffs. Subsequently, Haiti has had to import rice from Arkansas, among other places. Biden can change that pattern with trade policies that aim to get the Haitian economy back on its feet sustainably and get millions of Haitians working with the goal of developing French and Haitian-Creole speaking versions of the industries that make the Dominican Republic, Jamaica (HDI ranking #101), and Barbados (#58) politically stable economic successes. In the process, President Biden could put a new feather in his cap as the first president dedicated to making sure Black Lives Matter everywhere, not just within American borders. Making sure all the black lives in Haiti, the world’s first black republic and the second independent nation of the Western Hemisphere after the U.S., feel positive economic winds in their backs could go a long to solving the frustrations that dominate Haitian politics.

Maybe Haiti’s nadir comes at a good time for American foreign policy. President Biden seems to be finding his voice on developing countries. When thousands of protesters hit the streets of Cuba this month because of their terrible economy and the government’s failures to improve their lives, Biden called the protests “a clarion call for freedom.”

Haitians have been protesting for the same kind of freedom since 2018. In fact, I’d argue Haitians have been asking Washington to similarly respect and honor our passion for freedom and economic sovereignty since 1804, when Haiti forcefully rejected slavery and Napoleon’s rule, despite generating half of France’s GDP with its productivity.

Back then, and since then, the U.S. responded to Haitian calls for dignity and commonwealth-building with embargoes or military dominance. It’s time for Biden to buck tradition and give Haiti the same support he’s showing the Cubans today. Ball’s in your court, President Biden. Listen to the Pope’s words and become the first U.S. president to truly recognize and support Haiti’s clarion calls for freedom. 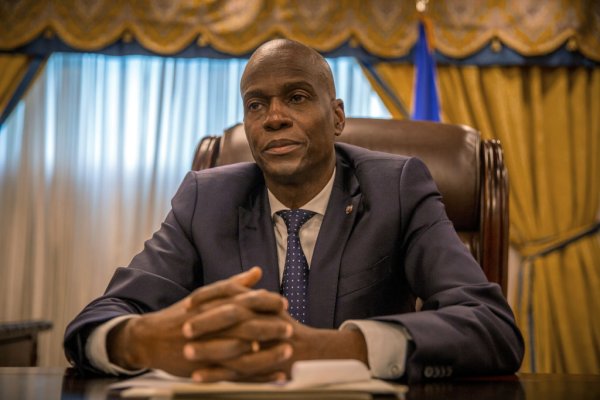 Haitian President Assassinated: Who Is Christian Sanon?
Next Up: Editor's Pick