Win Htet Oo worked all his life to become an elite swimmer, with the dream of representing Myanmar at the 2020 Tokyo Olympics. But after the Feb. 1 military coup that overthrew the democratically elected government in Myanmar, he forfeited his chance at Olympic glory, saying he would not represent the military junta in international competition.

Now, the 27-year-old is criticizing the International Olympic Committee (IOC) for allowing the military government to send a delegation to Tokyo—saying the organization’s policy of neutrality risks tarnishing the core values of the Olympic Games.

“When the coup happened, I had no thought of representing Myanmar under that flag, under the military regime,” Win Htet Oo tells TIME via video call from Melbourne, Australia, where he lives and trains.

Win Htet Oo, who holds Myanmar’s 50-m, 100-m and 200-m men’s freestyle records, is perhaps Myanmar’s top swimmer. He had a chance to compete at the Tokyo Olympics after meeting the qualifying standard time at the 2019 Southeast Asian Games, where he represented Myanmar.

Two months after the coup, he wrote to the IOC asking that Myanmar athletes be allowed to compete under a neutral flag. The IOC turned down his request, saying it would remain politically neutral.

After learning that the military government had staffed the Myanmar Olympic Committee to form an Olympic squad, Win Htet Oo announced his withdrawal from the Olympics on April 10—to preemptively avoid being associated with the military. At least three Myanmar athletes—in badminton, judo and shooting—have qualified to compete in Tokyo.

The IOC did not respond to TIME’s request for comment Monday. However, in a statement to Australian outlet SBS News, the organization referred to the section of the Olympic Charter that says “sports organizations within the Olympic Movement shall apply political neutrality.” The statement also said the Myanmar Olympic Committee has assured the IOC that there has been “no impact” on Myanmar’s preparation for the Games.

The military has continued its violent crackdown on protests, which have taken place almost daily since it seized power from the government led by Aung San Suu Kyi. Nearly 900 people have been killed, according to the United Nations, which calls the political crisis “a multi-dimensional human rights catastrophe.” Myanmar is at risk of a civil war, with some protesters and ethnic militias engaging in armed fights with the military in various parts of the country.

READ MORE: A Leading Activist Talks About Her Role in the Fight Against Myanmar’s Junta

Win Htet Oo says the IOC is hiding behind its policy of political neutrality to allow Myanmar and other brutal regimes to compete—and he believes it’s hurting the Olympics in the long-term. “The IOC can’t use the neutrality principle to duck away from these decisions, and they have… to resolve to make these decisions to ultimately protect the Olympic movement,” he says.

He adds: “Any sort of stain of repression or crimes against humanity does not belong at the Olympic Games. Even the IOC’s own values, principles need to be fought for and allowing the Myanmar Olympic Committee into the Games goes against these values and principles.”

Few countries have been barred from the Olympic Games. Russia’s Olympics organization was banned from the 2018 Winter Games, as well as the 2020 and 2022 Olympics, over state-sponsored doping—though athletes were allowed to participate under a neutral flag. The IOC banned South Africa from competing in 1964 and 1968, and expelled the country’s Olympics organization entirely in 1970 following a boycott campaign over the country’s racist apartheid policies. After World War I and World War II, several nations on the losing side of those conflicts were excluded from the Olympics, as well.

Win Htet Oo is not the only prominent Burmese athlete to have openly denounced the Myanmar military. In June, Pyae Lyan Aung, goalkeeper for Myanmar’s national soccer team, refused to return home after a match in Japan. He told reporters he feared for his life after flashing a three-finger salute, a symbol of protest against the Myanmar junta. The soccer player is now seeking asylum in Japan.

Win Htet Oo says he’s reaching out to other Burmese athletes who are based outside Myanmar to form a solidarity group to advocate to the IOC and other international sports governing bodies.

By boycotting the Tokyo Games, Win Htet Oo is effectively putting an end to his swimming career that started when he was six years old. But he says he doesn’t regret it. “I stand in solidarity with so many people in Myanmar, whose dreams have also fallen apart,” he says. “My sporting career is nothing compared to everything that they’ve lost. They’ve lost chances of settling down, having a family, having a career.” 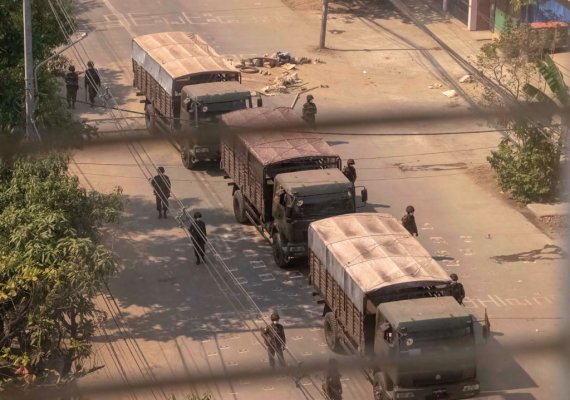 Facebook Tried to Ban Myanmar’s Military. But Its Own Algorithm Kept Promoting Pages Supporting Them, Report Says
Next Up: Editor's Pick