Russia Was Banned From the Tokyo Olympics. These Athletes Are Finding Other Ways to Compete

Russian long jumper Darya Klishina says has been waiting for her Olympic moment since she was 16 years old, when was professionally training in Moscow, some 112 miles from her small hometown of Tver. Even though she will compete in a half-filled stadium due to COVID-19 restrictions, she expects it to feel more celebratory than her experience at the 2016 Rio Olympics, where she was the only Russian track and field athlete granted permission to compete by World Athletics (WA).

Since the Russian Athletic Federation (RusAF) was suspended from the sports governing body in 2015 over its alleged government-run doping program, only Russian athletes who had no involvement in the scheme have been allowed to compete internationally as neutrals. Klishina, 30, says her experience in Rio was “lonely” and “stressful” as a result. As she prepares to travel to Tokyo, she is determined to make it different this time around. “I want to change my Olympic experience in a positive way,” she tells TIME over a Zoom call in May from her home in Atlanta, Georgia, where she is currently training six days a week in temperatures of 83° F.

Russia denies conducting a state-run doping program and Prime Minister Dmitry Medvedev has called the sanctions “chronic anti-Russian hysteria,” although he did concede that Russia had “undeniable” and “significant” problems with doping. Klishina, who had been living in the U.S. since 2012 and has been subject to “compliant drug testing” outside of her country, is one of a limited number of Russian track and field athletes who have been permitted to compete internationally. Under WA Rules, she will participate with nine other Russian track and field athletes at Tokyo Olympics as part of the Russian Olympics Committee, without her country’s flag or the national anthem.

RusAF has been hit by the most severe sanctions ever placed on a sports federation, and its reputation has been tarnished by one doping scandal after another over the past six years. Many athletes in Russia feel pessimistic about RusAF returning to world sport anytime soon.

Some young athletes—unwilling to pin the future of their careers to reforms by RusAF—are trying to secure dual citizenship in other countries and join other national teams for the chance to compete without restrictions. But not all athletes can afford to lose the years required for this process. Klishina says she had thought about changing teams several years ago, but was deterred by the difficult and long process. For athletes nearing the end of their careers, the suspensions may mean they will not be able to compete on the world stage again. “Some athletes feel that their 15 years of training has amounted to nothing,” says Mikhail Prokopets, a partner specializing in sports law at Moscow-based law firm SILA.

Since Russia’s athletics federation was suspended from WA, anti-doping officials and journalists have uncovered multiple scandals revealing how top Russian officials often played an integral role in covering up doping schemes. Two RusAF presidents have come and gone. Dmitry Shlyakhtin, who pledged he would return RusAF to the world athletics stage and “restore trust” upon becoming federation’s president 2016, stepped down in 2019 after he was suspended for obstructing an investigation into doping. His successor, Yevgeny Yurchenko, resigned last July amid doping scandals embroiling the federation’s officials. RusAF has been stripped of more than 20 Olympic medals. And Russia, previously a major host and sponsor of athletics competitions, has been barred from hosting and bidding for events.

Although RusAF in March submitted a report, approved by the WA, outlining anti-doping reforms, a date for the reinstatement of Russia’s membership has not been publicly set. “The Russian public have turned away from athletics because no one knows if what they’re seeing is real,” says Alan Moore, a sports presenter at Moscow’s Capital FM. In the past few years, the Russian media has covered less athletics-related news. “No one knows if today’s world record holder is going to be found out for something retrospectively,” he adds.

Countries recruiting foreign athletes in pursuit of success is nothing new. But since the RusAF was suspended from WA, the practice has been “accelerated”, says Moore. In recent years, various countries including Armenia, Georgia and Azerbaijan have stepped up their recruitment of Russian athletes with dual nationalities. Representatives of U.S. universities have visited Russia, even during the pandemic, he says, to promote college sports scholarships which could be a route onto the U.S. national team. By the time young athletes complete their bachelors and masters degrees, they may be eligible to become naturalized U.S. citizens, a status that may be granted after three or five years as a resident. At that point, they may be able to apply to join the U.S. national team.

Matvey Volkov, a 16 year-old pole vaulter, left his hometown Irkutsk in Siberia for Minsk, Belarus last August, where he hopes he will be able to join the national team and compete internationally. He was invited by the Belarus Athletics Federation (BAF) to train there last spring and in March he gained Belarusian citizenship. The junior world record holder has now applied to join the Belarusian national team. “Here I feel like I’m fully valued as an athlete, not like in Russia, where you only go to competitions that don’t involve people from abroad, and which no one talks about,” he says. Volkov felt that his career would have suffered if he stayed in his home country. “It’s as if Russia doesn’t need track and field athletes, otherwise it wouldn’t have allowed such critical mistakes to happen,” he says, referring to the scandals surrounding the past two RusAF presidents.

His father and coach Konstantin, a former pole vaulter and Olympic silver medalist who moved to Minsk with his son, knows what it is like to be sidelined from international competitions. He was barred from participating in the 1984 Olympics in L.A. after the Soviet Union boycotted the event, a tit-for-tat response after the U.S. boycotted the 1980 Moscow Olympics following the Soviet Union’s 1979 invasion of Afghanistan. “I don’t think Matvey should come under any sanctions, it’s discrimination. I’ll do whatever I can for him,” he says.

Matvey Volkov says the decision to move was mainly prompted by RusAF missing a July 1 deadline to pay a $5 million fine and $1.3 million in costs to WA, leading the governing body’s council to halt the work of the doping review board, which clears Russian athletes to compete internationally as neutrals. The missed payment, which RusAF said occurred due to financial difficulties, sparked fears among Russian athletes that they would lose any chance of competing abroad. RusAF eventually handed over the fine on Aug. 12, three days before a new deadline that, if missed, would have seen the federation expelled from world athletics. Recommending that penalty in a July 30 report, Rune Andersen, Chair of the WA Taskforce to Russia, wrote that the unit had seen “very little in terms of changing the culture of Russian athletics” over the previous five years.

Pole vaulter Matvey Volkov was not the only Russian athlete who considered a move to Minsk. Interest in Belarus from Russian athletes who were under sanctions “really increased” after RusAF failed to pay the initial fine, says Veranika Hers, General Secretary of the BAF. “Some very famous athletes also asked for advice on the prospect of joining the Belarus athletic team,” she says. The conditions to join the national team include “mutual desire of the athlete, coach and the host country, an irreconcilable attitude to doping, high level of results, professional knowledge and competence of not only the athlete, but also their coach,” Hers says.

The biggest obstacle to changing sports citizenship is the transition phase, a wait of one-to-five years—depending on the rules of sport federation—between representing two different national teams that aims to prevent athletes from frequently switching allegiance, says lawyer Prokopets. Many athletes cannot afford to lose these crucial years in careers that are typically short-lived, but “they also don’t have the time to wait for the restrictions to be lifted,” he says.

Like Volkov, Elena Kulichenko, an 18 year-old Russian high jumper from Odintsovo, a city near Moscow, decided to apply to switch national teams after RusAF failed to pay WA. She had already obtained Cypriot citizenship in 2019 to give herself the possibility of switching allegiances if sanctions on RusAF did not ease. Kulichenko, a silver medalist at the 2017 European Youth Olympic Festival, was able to easily gain second citizenship because her father works and owns property in the country. Foreign nationals who invest at least 2.2 million euros ($2.6 million) in the Cypriot economy are eligible to apply for passports for themselves and their families through the country’s investment programme. In March, she applied to join the Amateur Athletic Association of Cyprus, and by April the association gave her the greenlight on the condition that she serve a one year transition period before competing for the club internationally. “It wasn’t a spontaneous decision, I thought about it for a long time,” she says. “RusAF was upset by the decision and offered me more training opportunities if I stayed, but they were understanding,” she says.

Kulichenko says that fellow Russian athletes supported her decision, with many telling her they would do the same if they had such an opportunity. But she was hit by a “wave of hate” on social media after announcing her decision in the Russian media. “I got hundreds of messages on Instagram calling me a traitor,” she says. “I was upset and shocked at first but the important thing is that everyone who really knows me supported me,” she adds.

Ksenia Maiorova, a U.S. lawyer of Russian descent specializing in sports immigration and Managing Partner of Orlando-based Maiorova Law Group, says that athletes from Russia and Eastern Europe face a “particularly high level stigma” for choosing to train abroad or join a foreign national team. She says that some of her clients from Russia and Eastern Europe have chosen to keep their U.S. green card applications private because of the political hostility they face at home. Russian athletes, like other emigrants from the country, are seen as “sellouts,” she says: “People who couldn’t bite the bullet and deal with whatever was going on in their country.”

Almost six years of competing as a neutral athlete under sanctions against RusAF has helped to prepare long jumper Klishina for Tokyo. At least this year, unlike in 2016, she will not be the only Russian track and field athlete under the spotlight. Competing without her country’s flag doesn’t bother her as much as it used to. “Of course, I want to be able to celebrate with my flag—everybody wants a flag. But now I’m used to it,” she says. Being one of the few competing athletes from a federation whose reputation continues to be dominated by the doping scandal adds another layer of pressure on athletes, but Klishina says she is trying not to let it get to her. “I know I can’t do anything to change the situation, unfortunately,” she says. “I don’t want to feel this extra pressure on my shoulders. I’m focused on my result.” 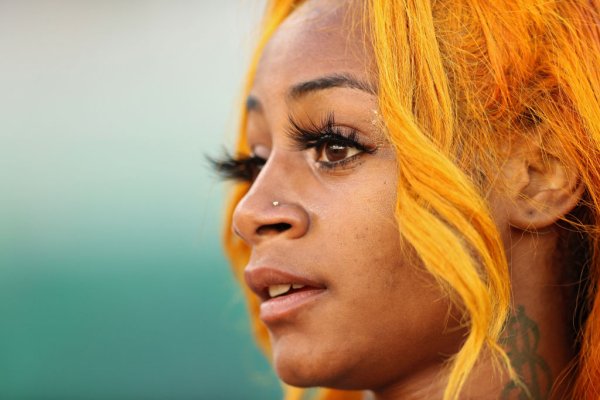