Osaka withdrew from the French Open to tend to her mental health
Williams & Hirakawa—AUGUST
Ideas
By Naomi Osaka
Naomi Osaka is a professional tennis player who will represent Japan in the upcoming Olympics. Osaka was the first Asian tennis player to be ranked No. 1 by the Women's Tennis Association and the first Japanese-born player to win a grand slam.

Life is a journey.

In the past few weeks, my journey took an unexpected path but one that has taught me so much and helped me grow. I learned a couple of key lessons.

Lesson one: you can never please everyone. The world is as divided now as I can remember in my short 23 years. Issues that are so obvious to me at face value, like wearing a mask in a pandemic or kneeling to show support for anti-racism, are ferociously contested. I mean, wow. So, when I said I needed to miss French Open press conferences to take care of myself mentally, I should have been prepared for what unfolded.

Lesson two was perhaps more enriching. It has become apparent to me that literally everyone either suffers from issues related to their mental health or knows someone who does. The number of messages I received from such a vast cross section of people confirms that. I think we can almost universally agree that each of us is a human being and subject to feelings and emotions.

Perhaps my actions were confusing to some because there are two slightly different issues at play. In my mind they overlap, and that’s why I spoke about them together, but let’s separate them for the sake of discussion.

The first is the press. This was never about the press, but rather the traditional format of the press conference. I’ll say it again for those at the back: I love the press; I do not love all press conferences.

I have always enjoyed an amazing relationship with the media and have given numerous in-depth, one-on-one interviews. Other than those super-stars who have been around much longer than I (Novak, Roger, Rafa, Serena), I’d estimate that I’ve given more time to the press than many other players over recent years.

I always try to answer genuinely and from the heart. I’ve never been media-trained, so what you see is what you get. The way I see it, the reliance and respect from athlete to press is reciprocal.

However, in my opinion (and I want to say that this is just my opinion and not that of every tennis player on tour), the press-conference format itself is out of date and in great need of a refresh. I believe that we can make it better, more interesting and more enjoyable for each side. Less subject vs. object; more peer to peer.

Upon reflection, it appears to me that the majority of tennis writers do not agree. For most of them, the traditional press conference is sacred and not to be questioned. One of their main concerns was that I might set a dangerous precedent, but to my knowledge, no one in tennis has missed a press conference since. The intention was never to inspire revolt, but rather to look critically at our workplace and ask if we can do better.

I communicated that I wanted to skip press conferences at Roland Garros to exercise self-care and preservation of my mental health. I stand by that. Athletes are humans. Tennis is our privileged profession, and of course there are commitments off the court that coincide. But I can’t imagine another profession where a consistent attendance record (I have missed one press conference in my seven years on tour) would be so harshly scrutinized.

Perhaps we should give athletes the right to take a mental break from media scrutiny on a rare occasion without being subject to strict sanctions.

In any other line of work, you would be forgiven for taking a personal day here and there, so long as it’s not habitual. You wouldn’t have to divulge your most personal symptoms to your employer; there would likely be HR measures protecting at least some level of privacy.

In my case, I felt under a great amount of pressure to disclose my symptoms—frankly because the press and the tournament did not believe me. I do not wish that on anyone and hope that we can enact measures to protect athletes, especially the fragile ones. I also do not want to have to engage in a scrutiny of my personal medical history ever again. So I ask the press for some level of privacy and empathy next time we meet.

There can be moments for any of us where we are dealing with issues behind the scenes. Each of us as humans is going through something on some level. I have numerous suggestions to offer the tennis hierarchy, but my No. 1 suggestion would be to allow a small number of “sick days” per year where you are excused from your press commitments without having to disclose your personal reasons. I believe this would bring sport in line with the rest of society.

Finally, I want to thank everyone who supported me. There are too many to name, but I want to start with my family and friends, who have been amazing. There is nothing more important than those relationships. I also want to thank those in the public eye who have supported, encouraged and offered such kind words.

Michelle Obama, Michael Phelps, Steph Curry, Novak Djokovic, Meghan Markle, to name a few. Furthermore, I am eternally grateful to all my partners. Although I am not surprised as I purposefully chose brand partners that are liberal, empathetic and progressive, I am still tremendously thankful.

After taking the past few weeks to recharge and spend time with my loved ones, I have had the time to reflect, but also to look forward. I could not be more excited to play in Tokyo. An Olympic Games itself is special, but to have the opportunity to play in front of the Japanese fans is a dream come true. I hope I can make them proud.

Believe it or not, I am naturally introverted and do not court the spotlight. I always try to push myself to speak up for what I believe to be right, but that often comes at a cost of great anxiety. I feel uncomfortable being the spokesperson or face of athlete mental health as it’s still so new to me and I don’t have all the answers. I do hope that people can relate and understand it’s O.K. to not be O.K., and it’s O.K. to talk about it. There are people who can help, and there is usually light at the end of any tunnel.

Michael Phelps told me that by speaking up I may have saved a life. If that’s true, then it was all worth it. 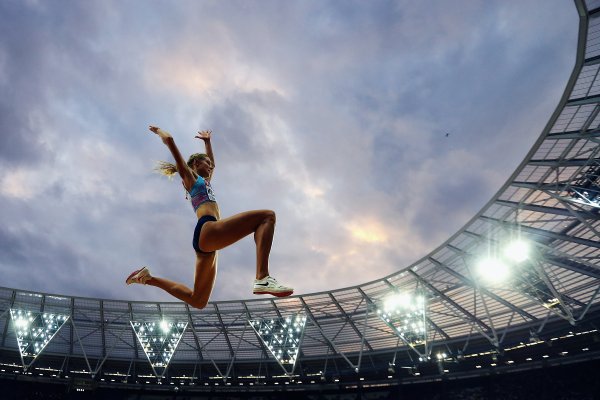 How Russian Athletes Are Trying to Compete in the Olympics
Next Up: Editor's Pick