'Unapologetic and Unafraid.' Sue Bird Stares Down Olympic Glory in Tokyo and Equity Off the Court

For Sue Bird’s first Olympics, in 2004 in Athens, the team stayed on the Queen Mary 2 cruise ship. Early WNBA stars like Dawn Staley, Sheryl Swoopes and Lisa Leslie led the squad, and a few of the younger players, including Bird, were quite fond of a nightclub on the ship, G32. “They partied every single night,” says Staley. “It should have been called the ‘Sue Bird Nightclub.’”

Once the quarterfinals hit, Staley told the players to cool it. “It would have been the easiest thing to say, ‘Oh, old lady, you don’t know what you’re talking about,’” says Staley. Instead, Bird took the request as a leadership lesson: speak up when it matters. After the U.S. won the gold, the players started chanting “G32” on the podium. The whole team partied hard that night.

Seventeen years later, Bird, 40, has assumed the role of wizened veteran, both on and off the court. Now the WNBA’s all-time assists leader, Bird will bring her extraordinary floor vision to the Tokyo Olympics, where she and teammate Diana Taurasi hope to become the first basketball players to win five Olympic gold medals. Former teammate Staley is now their coach.

The (likely) last Olympics of Bird’s storied career comes as the larger world has finally begun to appreciate her greatness. Days after the Seattle Storm clinched its fourth title last October, for example, Seattle Seahawks quarterback Russell Wilson wore a Bird jersey before a prime-time game. “I feel like Sue Bird in the clutch,” he said after leading his team to a comeback victory. He wasn’t the only one paying tribute. In 2020, Bird led the WNBA in jersey sales for the first time in her career.

Photograph by Paola Kudacki for TIME

Bird, who grew up on New York’s Long Island and won two NCAA titles at the University of Connecticut, loves to geek out on her craft, but she knows as well as anyone that women’s basketball and the WNBA have always had to fight for more than wins: acceptance from fans predisposed to dismiss women’s sports, better pay and benefits, and equity for the league’s many players of color and those who identify as LGBTQ. “We never got the chance to shut up and dribble,” Bird says of the WNBA. “So that’s when we kind of developed this backbone about us.”

Their commitment to social change deepened last summer amid a national reckoning about race and as part of a broader wave of athlete advocacy. Despite warnings that fans would be turned off by the activism, ratings for ESPN’s first five games of the current WNBA season were up 74% over the 2020 season average. The Olympics have consistently raised the profile of women’s basketball in the U.S., and Bird’s record-breaking quest in Tokyo should help build even more momentum.

Bird considers herself naturally shy. She credits her fiancée, soccer icon Megan Rapinoe, with helping amplify her voice. (The pair first hit it off at the 2016 Rio Olympics.) Though Bird never hid her sexuality from family and friends, Rapinoe persuaded her, in 2017, to publicly reveal that she was gay. “What Megan helped me understand was that, yes, what I was already doing was great, living authentically,” says Bird. “But it was important to say it, because the more people that come out, that’s where you get to the point where nobody has to come out. Where you can just live. And it’s not a story.”

The experience helped Bird get comfortable shining her spotlight off the court. In 2020, Bird was a vocal ally for the league’s players—80% of whom are people of color—but she also led by listening. “The biggest thing that she did was, she just took a backseat and learned a lot of stuff about African Americans and what we go through and our history and things she wasn’t necessarily educated in,” says Jewell Loyd, Bird’s Storm teammate, who will make her Olympic debut in Tokyo. “A lot of people don’t want to always do that. But she did.”

At 40, Bird—still one of the WNBA’s best passers and shooters—shows few signs of slowing
Julio Aguilar—Getty Images

After Kelly Loeffler, then a U.S. Senator and co-owner of the Atlanta Dream, criticized the WNBA for supporting Black Lives Matter, Bird suggested that players wear VOTE WARNOCK T-shirts in support of Loeffler’s opponent Raphael Warnock, who ultimately won the Georgia election and helped flip the Senate to the Democrats. The WNBA players also took a stand when Jacob Blake was shot in Kenosha, Wis., and the Milwaukee Bucks refused to take the court. In a scene in the recent ESPN documentary 144, a WNBA player asks union leaders what the league would do if the NBA canceled its season. Bird raises her hand to respond. “It is important to understand that we are not them; they are not us,” she said. “If we had canceled our season, do you think they would have?” The WNBA held a vigil in Blake’s honor and took a two-day pause. “I just wanted to challenge, especially younger players, to really view themselves as their own entity. And their own league,” Bird says now.

Not that she doesn’t see the double standards. Bird is quick to note that while men have been head coaches in the WNBA, the NBA has never hired a woman to lead a team. Former WNBA star Becky Hammon, who has spent seven seasons as an assistant coach for the San Antonio Spurs, has again been passed over so far this hiring cycle. “If you took away her name and you took somebody else’s résumé, and you put them next to each other, you would see how qualified she is,” Bird says. “You would be shocked she hasn’t gotten a job already.”

These are boom times for older athletes—especially those at the top of their sport: Tom Brady won a seventh Super Bowl at 43; Phil Mickelson became the oldest golfer to win a major championship, at 50. At 35, Allyson Felix made a fifth U.S. Olympic team; at 39, Serena Williams is still a threat to win majors. Is it rare talent, smarter training, insatiable drive? Yes, yes and yes. “Maybe 50 will be the new 40,” Bird says, not wholly implausibly. But she’s realistic about how many more seasons she can race up and down a 94-ft. court against people half her age. “Where I am now, I don’t know that I’m going to want to do this for 10 more years,” she says.

Sometimes it hits her just how long she’s been playing. Bird recently learned that she’s the same age as a teammate’s mom. “I knew, with this draft class, I’m approaching ‘I could be their mom,’” Bird jokes. “And not in like an ‘Oops, I got pregnant when I was super young’ way, but in an ‘I got married and planned my family’ way.”

Bird is not ready to think about what’s next, but others have begun talking about her place in history. “She’s a life point guard,” says Staley, the Olympic teammate turned coach. “She gives assists to justice causes; she gives a voice to women who are underpaid and underappreciated. She’s unapologetic and unafraid. Once a point guard, always a point guard. That’s her legacy.”

At 40, Bird—still one of the WNBA’s best passers and shooters—shows few signs of slowing
Paola Kudacki for TIME

Bird will look to build on that in Tokyo. The U.S. women carry a 49-game winning streak into the Olympics; the team has won the last six gold medals and hasn’t lost since 1992. But the rest of the world is getting better—and the bull’s-eye on the back of Team USA is getting bigger. Over the past two decades, Spain, now ranked third in the world, has emerged as a legitimate challenger; second-ranked Australia has medaled in five of the past six Games. And because of the demands of the WNBA season, the U.S. team—whose roster is pulled entirely from the league—has less time to practice together than other nations. 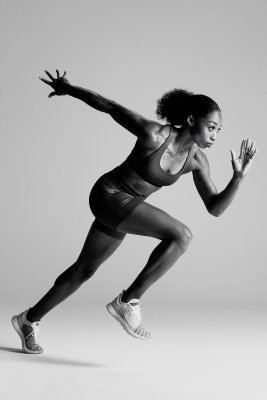 Allyson Felix Didn't Let Motherhood Slow Her Down
Next Up: Editor's Pick