Pacific Northwest Wineries Are Shaking Off the Extreme Heat Wave, But Are Worried What It Means for the Industry’s Future

The unprecedented heat wave that descended on the Pacific Northwest this week has alarmed many in the region’s burgeoning wine industry, leaving them worried over the deepening challenges climate change could bring to their businesses.

Earlier this week, temperatures skyrocketed as high as 117 degrees Fahrenheit in Oregon’s Willamette Valley—an area known for cool-climate wines like Pinot Noir—while Washington state might have broken its all-time state record with Chelan County recording a high of 119 degrees on Tuesday. Mark Chien, an experienced grape grower and the former program coordinator for Oregon State University’s Oregon Wine Research Institute, tells TIME that wineries may have come away largely unscathed from this week’s sizzling temperatures. However, he says continued extreme weather events could threaten the industry’s future.

“With a heat spike like this, there are the immediate concerns and then there are the medium-to-long-term consequences of climate change—especially in a place like the Willamette Valley, which is prized for its cool climate,” Chien says. “Climate change is taking the region away from its hallmark reputation. The industry is going to have to deal with that.”

At Willamette Valley Vineyards in Oregon, CEO and founder Jim Bernau says that, fortunately, this week’s heat occurred at the point in the growing season when it could cause the least amount of damage.

“Mother nature picked the absolute best time for this heat because we’d already been through flowering, we’d already been through fruit set,” he said. “It rained twice the average amount in June so the ground was charged with water and our vines had produced very vigorous canopies and leaf cover. Our little berry clusters had yet to start to grow so they didn’t experience any dehydration.”

But if the extreme temperatures had lasted more than a few days, Bernau says it could have spelled major trouble for the vineyard’s vines. “Had the high temperatures gone on longer, it could have become quite serious because what happens is the vines shut down to protect themselves. Fortunately, this shutdown period was short. But if it had persisted, that would have created a whole host of problems. Had this occurred at a different time in the season, it would have been a disaster.”

Over the past few decades, the Pacific Northwest has greatly matured as a wine region. According to America Wines Paper, Washington ranks as the second most wine producing state in the country, with Oregon ranking fourth (California and New York coming in first and third, respectively). Washington state alone is home to over 1,000 wineries.

Much of eastern Washington has an arid, semi-desert environment that specializes in warm-climate wines like Cabernet Sauvignon and Syrah. Even there, Oliver May, the manager of Discovery Vineyard in the Horse Heaven Hills, says that while growers tend to prefer hot years, there’s a limit to what any grapevines can take.

“It’s not desirable to have extreme heat waves like this and it makes it very difficult to get the most desirable product at the end of the year,” May said.

Since water management is crucial for optimal grape growth, if heat waves continue to create water scarcity in the Western U.S., May says that Pacific Northwest winegrowers could end up in a tight spot.

“With the drought situations that are happening across the West right now, it’s going to get more and more difficult to manage these heat waves. Vines can adapt to drought conditions, but this is extreme,” he says. “The past few years, every year has been the hottest year. So at this point, this definitely isn’t the best place to grow grapes and it’s just going to become more and more difficult and maybe not even doable.”

Wildfires brought on by extreme heat and drought can also be detrimental for vineyards, regardless of whether flames come in direct contact with the vines. “Smoke taint that attributes to grape skins can ruin the vintage,” May says.

The effects of increasingly extreme weather patterns have already changed how grapes are grown in the Pacific Northwest, Chien says, and could cause even greater shifts.

“If this is an omen of things to come, there should be tremendous concern. And as things have warmed up over the last decade, that’s certainly been the pattern,” he says. “In the 40 years I’ve been doing this, we’ve shifted the entire planning of vineyards in cool places like the Willamette Valley from trying to get the fruit to ripen earlier to now doing everything possible to cool the fruit and have it ripen later in the autumn.”

These challenges aren’t limited to the U.S., climate change has had a drastic effect on how wines are grown all around the world.

“There’s been an unbelievably dramatic change in the sensibility of how you make great wine anywhere in the world,” Chien said. “And that means changing rootstocks, changing varieties, changing the elevation and design of vineyards, changing the spacing of vines, changing trellis systems, changing canopies. It all has to be altered in order to accommodate changes in the climate and it’s dramatic and expensive.”

The original version of this story misstated Mark Chien’s professional status. He is the former program coordinator for Oregon State University’s Oregon Wine Research Institute, not the current coordinator. 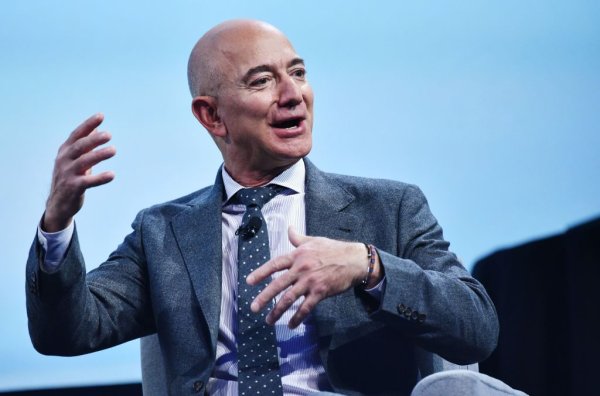 Amazon Revises Corporate Values Days Before Bezos Steps Down
Next Up: Editor's Pick