Here Are the 11 New Books You Should Read in July

The best books arriving this month dive deep in all different directions. There’s a comprehensive look at loneliness in America—and an equally compelling dissection into why we sweat. One new novel is a thrilling quest to avenge a double murder and another finds its characters investigating their husbands’ dubious moralities. Some narratives expose the harsh realities of everyday living; others seek to uncover the unknown. Here, the 11 new books you should read in July.

Blending personal narrative and cultural commentary, The Collection Plate introduces Kendra Allen as a poet to watch. In her debut collection, Allen underlines the common threads between a variety of experiences, from what it means to exist as a Black person in America to the tense relationships between mothers and daughters. Throughout, as she explores girlhood, freedom, sex and more, Allen shines a light on the spaces that connect and divide us, coalescing into an electric portrait of joy and pain.

Two ex-cons come together to seek revenge after both of their sons, a married couple, are murdered. They don’t have too much in common, but the tragedy has left them unexpectedly linked. As they grapple with their messy pasts amid a violent present in the American South, the men embark on a dangerous quest, which S.A. Cosby captures in gripping and intense terms.

Seek You: A Journey Through American Loneliness, Kristen Radtke (July 6)

The latest work of graphic nonfiction from Kristen Radtke pulls apart how loneliness operates to understand why it exists and the forms it can take. Combining history and cultural analysis with personal stories, Radtke argues that loneliness is an epidemic that can be viewed through many lenses. In pages full of haunting illustrations, Seek You prompts readers to look inwards. In forcing us to confront our own loneliness, Radtke makes us feel a little less alone.

Give My Love to the Savages: Stories, Chris Stuck (July 6)

Nine short stories set in cities across the United States, from Los Angeles to Phoenix to New York, examine masculinity and Blackness, and the many ways race and identity intersect. From a Black Republican grappling with a skin disease that’s made him appear white to a biracial man on a visit to see his estranged white father, the characters that populate Chris Stuck’s electric debut collection highlight the complexities of racism and Black life. Often employing satire, Stuck is unafraid to tackle and illuminate the absurdities that accompany how we perceive and react to race.

Buy Now: Give My Love to the Savages on Bookshop | Amazon

Persephone Wilder is living in Namibia where she diligently attends to her duties as the wife of an American diplomat. When the newest trailing spouse, Amanda Evans, arrives in town, she’s quick to show her the ropes. But Amanda’s husband may not have been so honest about his reasons for uprooting their family—and the consequences grow increasingly dire when their daughter becomes embroiled in international conflict. As Amanda fights to save her family and Persephone is forced to confront the cracks in her own life, the two women start to question if they ever really knew their husbands at all.

The Joy of Sweat: The Strange Science of Perspiration, Sarah Everts (July 13)

The science of sweat is complicated and, well, weird. Journalist Sarah Everts explores how sweat works in a book that jumps around the world, from a dating event in Moscow where romantic hopefuls sniff each other’s sweat to an infamous smoke sauna in Finland. Everts answers a range of questions throughout about sweat and our history of wanting to control it, including an analysis of the deodorant and antiperspirant industries.

Buy Now: The Joy of Sweat on Bookshop | Amazon

The intricately plotted debut from Pik-Shuen Fung finds a daughter as she wrestles with questions over her father’s death. For most of her life, he worked in Hong Kong while she grew up in Vancouver and lived with the rest of their “astronaut” family. After his passing, the unnamed protagonist revisits their family history to understand the man she never really got to know. Her search, both complex and devastating, yields revelations about family, grief and the durability of love.

So you’ve survived the worst night of your life—what comes next? The question propels Grady Hendrix’s twisty new novel, which builds off of tropes in horror movies to ask what happens to the people left standing after a massacre. Like its title suggests, The Final Girl Support Group follows a group of women who meet with a therapist to discuss their experiences following their traumas and struggles to move on with their lives. Things hit a snag when one of the girls misses a meeting—setting off a narrative that is equal parts thrilling and darkly funny.

At the center of Katie Kitamura’s piercing new novel is a translator caught in the intersection of a lot of other people’s drama. She’s working at The Hague, and there, her colleagues have somehow embedded her into their private lives. As she becomes more involved in their sagas, the protagonist of Intimacies slips into her own when she’s tasked with interpreting for a powerful former president on trial for war crimes. From there, Kitamura’s latest unravels in terms both disquieting and unexpected.

The premise of Nightbitch sounds bizarre and that’s because it is: a young stay-at-home mother begins to notice hair growing where it shouldn’t be, her canines becoming suspiciously sharper and impulses that are increasingly dog-like. Her search for answers about her strange state leads her to a book called A Field Guide to Magical Women—and the absurdities only pick up from there. The outrageous nature of the plot yields funny and, at times, unsettling results as Yoder’s protagonist navigates her animalistic qualities.

Lifelines: A Doctor’s Journey in the Fight for Public Health, Leana Wen (July 27)

In her new book, Leana Wen reflects on her career as a public health leader, mapping out the work she’s done and how she got there. The author is unsparing in detailing her rise in the public health field, sharing her experiences as an immigrant from China, her family receiving food stamps and how she went to college at just 13 years old. Beyond her personal history, Wen explains how crucial public health is, from combating opioid addiction to infant mortality to COVID-19. 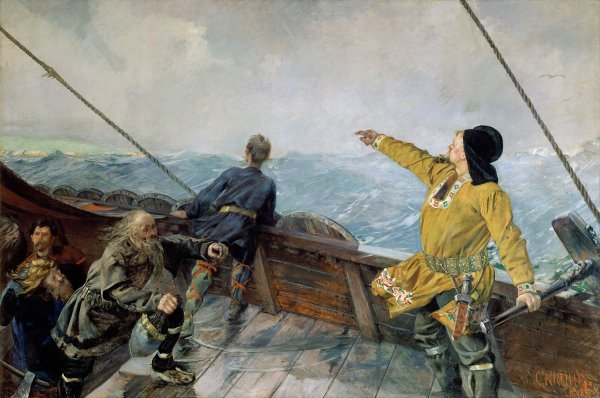 Why the Myth that Vikings Discovered America Is Problematic
Next Up: Editor's Pick